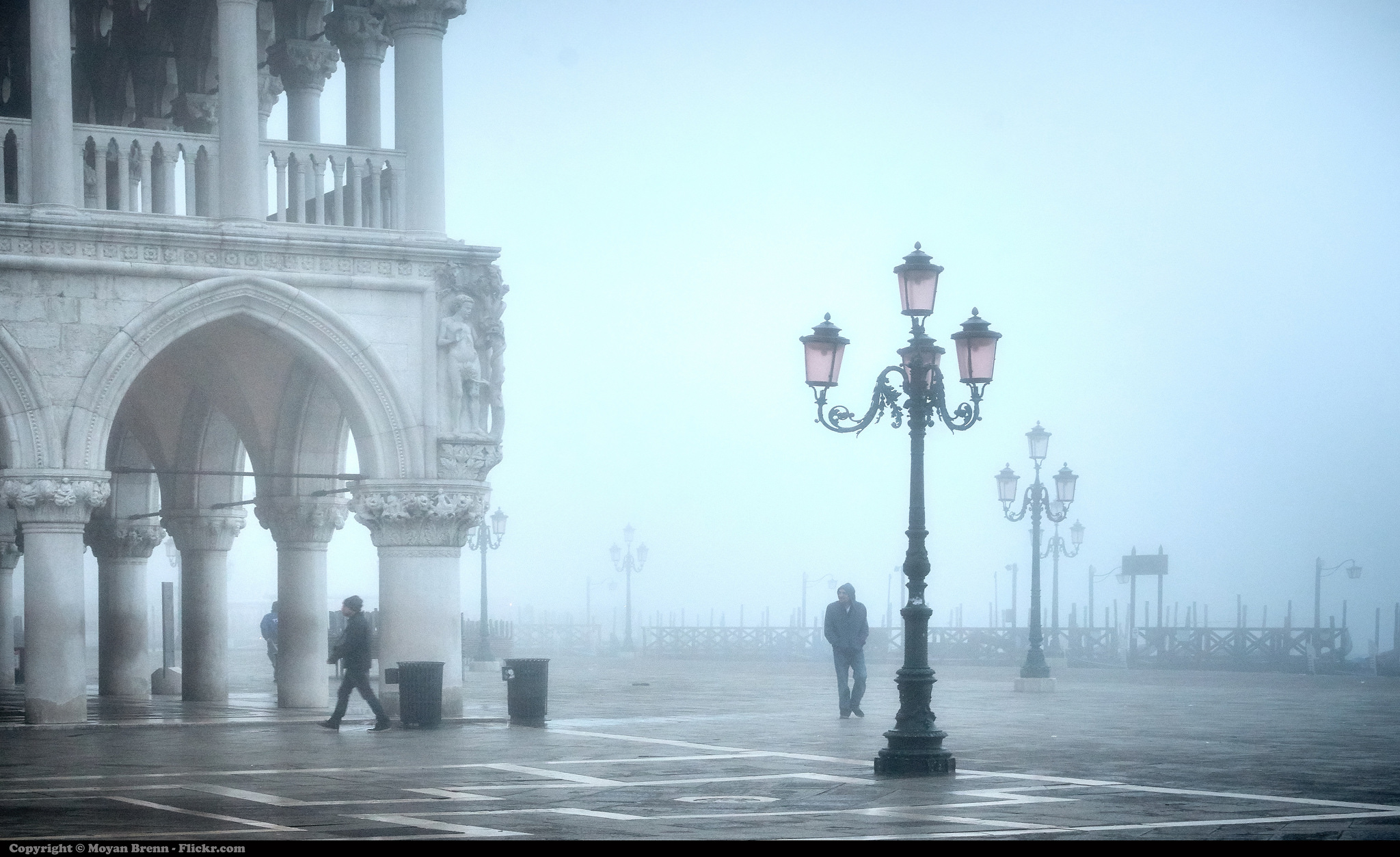 Photograph of Venice by Moyan Brenn, used with permission.

Our special correspondent David Ebony is recently returned from Venice where he took in the sights and sounds of the Biennale, and was generous enough to share his reactions with us.

Ever controversial, the Venice Biennale is the largest and arguably the most important exhibition of contemporary art on the planet. Having debuted in 1895, it is also one of the oldest shows of its kind. Yet each new incarnation still manages to generate an inordinate amount of hoopla, hype, and heatn the plus side, the right kind of exposure in Venice can dramatically elevate an artist’s career. Homegrown talents can reach a vast, international audience here. On the downside, a poor showing can sideline an artist’s career or, in some cases, ignite a firestorm of controversy. Such was the case this year with the Iceland Pavilion, when the Swiss artist Christoph Büchel transformed the space into a functioning mosque. Soon after the opening, city officials shuttered the pavilion, claiming that the piece diverged from the fundamentally non-religious purpose of the Biennale.

Hundreds of invited artists participate in the show each time, and many of them become the most talked about figures on the international art scene for a long time after the exhibition closes. On view in Venice through November 22, this year’s installment, the 56th—and the 10th I’ve attended—is exciting and rewarding as ever, despite the fact that many critics pummeled the main Biennale exhibition, “All the World’s Futures,” a sprawling group show organized by Nigerian-born curator Okwui Enwezor.

Currently director of the Haus der Kunst in Munich, Enwezor has been criticized for what some perceive as his overly didactic approach to the exhibition, which unfolds in the Central Pavilion of the Giardini (the public gardens of Venice), and the cavernous Arsenale, a renovated former military compound dating from the 12th century. “All the World’s Futures” encompasses works by 136 artists from 53 countries. Many of the offerings address socio-political themes, and the show’s centerpiece is a continuous reading of Karl Marx’s Das Kapital presented by live performers in the Arena, a new theater space designed for the occasion by ultra-trendy London-based architect David Adjaye (click here to read David Ebony’s interview with David Adjaye).

Aside from the curated group show, the Biennale includes independent presentations by eighty-eight countries (minus Iceland). Considerable excitement was generated this year by a number of the national pavilions, located in the Giardini and Arsenale, and in off-site venues scattered throughout the city. By far, the three most memorable exhibitions for me were those of Joan Jonas, in the United States Pavilion, Sarah Lucas, in the British Pavilion, and Céleste Boursier-Mougenot, representing France.

A strong Biennale exhibition can serve to honor certain artists who have had extensive and influential careers, and this is certainly the case with New York-based veteran performance, video and installation artist Joan Jonas. Although her enthralling exhibition, “They Come to Us Without a Word,” features recent works, most created especially for the Biennale, the show has the feel of a major museum retrospective, which the New York-based artist, now 78, has, unfortunately, never been offered. Jonas touches upon themes familiar from earlier works: the environment, complex, fairy tale-like narratives, ghost stories told with layering of superimposed images, and novel combinations of drawing and video techniques.

Dimly lit, evoking the twilight atmosphere of dusk or dawn, the installation is filled with a variety of sounds—music and ambient noises, some created by Jonas’s longtime collaborator Jason Moran. Though densely packed with multiple screens for a variety of video projections, sculptures, hanging mobiles, paintings on paper, and props from the films, the installation seems light, airy and ordered. There is never a feeling of claustrophobia that can sometimes grip one upon entering one of the stinky and airless video projection rooms elsewhere at the Biennale.

In something of a departure for the artist, who often performs in her own works, Jonas cast mostly children in the various parts of her wistful, abstract video dramas. The show’s overall ecological vision was inspired by Icelandic writer Halldór Laxness, author of Under the Glacier; and Jonas arranged the installation in connecting sections, with titles such as “Bees,” and “Fish.” I spent the most time in the area designated as “Wind,” captivated by a particularly dreamlike video showing superimposed images of children in vaguely medieval costumes, set in a forest of what appear to be birch trees, and silvery streamers, all accompanied by a hypnotic soundtrack of voiceovers, with rhythmic chanting and bells. Here, in this public space, Jonas offers the viewer a rare opportunity to experience a singular and private reverie.

In contrast with Joan Jonas’s subtleties, Sarah Lucas’s presentation at the British Pavilion is brash and bombastic. Many critics have dissed the show, but I found it thoroughly engaging and more profound than profane. Honoring at mid-career the former YBA (Young British Artist) star, who made her name in the 1990s, the exhibition, “I Scream Daddio,” provokes and cajoles. At the entrance to the pavilion is an outrageous phallic-shaped yellow-painted bronze object, a soaring protuberance some fifteen feet high. This work, Deep Cream Maradona, somewhat resembles one of Jeff Koons’s “balloon dogs,” but with far more mischievous intent. The pavilion’s interior is painted in a similar bright yellow, which Lucas says was inspired by an egg yolk. There’s a preponderance of custard yellow throughout the exhibition. “The whole show should be a dessert,” Lucas remarks in an interview recorded for the occasion by the British Council, which commissioned the show.

Lucas, born in London in 1962, has established an international reputation for hyper-sexualized sculptures often using everyday household items. Her work often comments on domestic violence and feminist issues. A key piece in “I Scream Daddio” is a real washing machine in white, whose window has been fitted with a yellow plastic bucket, so the altered object now resembles a fried egg. This wacky gesture, in the Dada/Surrealist vein, adds a touch of humor to balance the show’s more ominous imagery. A number of mangy black “cats” with engorged teats, for instance, haunt the space.

The dominant sculptural objects here are formed from plaster casts of female figures, bifurcated and shown only from the waist down—a number of them were cast from Lucas’s own body. In the interview, the artist refers to them as “topless muses,” the opposite of “busts.” Hung on one wall is a collaged painting with rows of circular images showing the women’s “tops”—heads and torsos. Into some of the plaster figures’ anal or vaginal openings, Lucas has inserted a single cigarette. The “cigarette butt” image alludes to the idea of penetration without explicitly showing the sex act. It may be another of Lucas’s rather perverse gestures, but the artist casually explains the addition as simply the use of her trademark material, since early in her career she made a series of cigarette-covered sculptures.

There is an intense psychological dimension to Lucas’s endeavor, regardless of her best attempts to sabotage the weighty seriousness of the work with silly or sophomoric-seeming gestures. While quite a few of my friends and colleagues did not appreciate this exhibition, for me, “I Scream Daddio” is everything a Venice Biennale presentation ought to be—provocative, demanding, well-realized and unforgettable.

Upon leaving the British Pavilion, as I clambered down the staircase, heading to the French Pavilion, my companion hollered, “Look at this tree!” I had almost passed by a large fir tree, a Scotch pine, whose partially exposed roots were wrapped in a large ball of reddish soil. Were they just about to plant the new tree in the Giardini in front of the French pavilion? “No! Really look at this tree!” my friend insisted. Sure enough, when I stopped in my tracks, I noticed that the tree was in motion; it slowly rotated, apparently activated by wheels and tracks hidden below the earthen ball. What an unsettling encounter with nature!

Just outside the pavilion was a similarly rotating tree, and yet another inside the pavilion, situated at the center of the space. This haunting and remarkable installation, rêvolutions, is the work of French artist Céleste Boursier-Mougenot. The pavilion’s ceiling skylights are open to air and light, which the artist in a press statement likens to the Pantheon in Rome. Visitors are invited to sit in comfortable tiered seating on the pavilion’s perimeters in order to contemplate the slowly spinning tree at center stage.

Born in Nice in 1961, Boursier-Mougenot lives and works in Sète; he is best known as a musician, and for his sound installations. Here, ambient electronic sounds gently fill the space; they are derived from the motion of the trees, whose trunks he has outfitted with microphones. Also audible are sounds of the tree’s sap periodically running within its veins. The three trees, or transHumUs, as the artist names them, are trees that we have never seen before—trees that can walk, and communicate. This show encompasses a feat of technological wizardry that results in a simple yet radical reassessment of the relationship between humanity and nature. Boursier-Mougenot suggests a confluence of art, technology and nature that is ultimately very hopeful. Usually in conflict, these three entities, quite like the three trees at the heart of this show, have never been in truer harmony.