With the horrific mass shooting at a historic African American church in Charleston last month, gun control was again atop the news cycle—briefly. We soon learned the attack was racially motivated, and gun control was quickly eclipsed by calls to remove the Confederate flag from statehouses throughout the south. Gun rights advocates were all too happy to see the focus shifted away from gun control—again.

In any event, our leaders were remarkably measured, if not downright cynical, in their comments on gun control immediately following the Charleston shooting. President Obama went so far to say that while the country is in dire need of new and stronger gun control measures, it was unlikely such legislation stood any chance in Washington, where Republicans dominate Congress, and the NRA controls them in turn. The president’s pessimism was not surprising; it’s difficult to imagine how the Charleston massacre could rally support around gun control, when the shooting deaths of twenty first graders at Sandy Hook elementary two years prior had failed. The president’s remarks were a sad commentary on the intractable state of our gun debate; indeed, they were a testament to the astounding power of the gun rights movement, and its ability to have its most radical demands met.

The gun rights movement has enjoyed amazing success since Sandy Hook. Not only did it block the president’s federal gun control measures, including universal background checks, and a ban on assault weapons and high capacity magazines, but it has also enjoyed numerous legislative victories at the state level over the past two years. One week after a vicious shootout between rival biker gangs in Waco, Texas last month, where nine people were killed and over a hundred guns confiscated from the combatants, the state legalized Open Carry and Campus Carry (which allows individuals with concealed carry permits to carry weapons on public university campuses). After a shooting at Florida State University last year, state lawmakers moved to allow Campus Carry—ignoring the loud and nearly unanimous objections of academic leaders. Georgia also passed its so-called “Guns everywhere bill” last year, permitting residents to carry firearms in a wide variety of public places, including bars and restaurants, government buildings, airports, and even churches pending pastors’ approval.

Every state in the nation allows concealed carry; forty-four states allow some form of open carry. Nine states permit Campus Carry, with several more deliberating the measure this year alone. And more than twenty states have legalized Stand Your Ground, the logical supplement to expansive gun rights, which allows gun owners to wield their weapons in public against perceived infractions and threats.

It seems we are at a high point of the gun rights movement. And yet, some facts tell a different story. While there are nearly as many privately owned firearms as there are citizens in the US, the number of households with a gun has actually been declining since the 1970s. As journalist and author Dan Baum points out in his book Gun Guys, the number of gun stores is also declining, as is the percentage of youth interested in hunting. Despite the gun rights movement’s prominent victories, most Americans do not share its ardor—or goals. Indeed, the majority of Americans is decidedly moderate when it comes to guns. Ninety percent support universal background checks—including seventy percent of NRA members. Other individual gun control measures also enjoy broad support. But when you ask Americans how they feel about “gun control” as such, the tide changes. A recent study by the Pew Research center revealed that, for the first time in twenty years, a majority of Americans now believe “it is more important to protect the right . . . to own guns” and a minority believe “it is more important to control gun ownership.” What’s going on?

One shortcoming of the gun control movement is that it fails to speak of guns symbolically. Gun safety proponents zero in on guns, and the damage they wreak, when advancing their cause. They claim to offer reasonable, “common sense” regulations—and are often foiled. By contrast, the NRA speaks of freedom, and independence, equality and tyranny when pressing its agenda. The NRA understands that guns mean so much more than “guns”—at least, to their many devotees.

During the Obama presidency, the symbolic power of guns has grown. Staunch support for gun rights has become a pillar of the Republican Party, though prominent Republicans championed gun control not long ago. More importantly, conservatives, indeed any who oppose the president—what he supports and what he stands for in twenty-first-century America—instinctively and impulsively support gun rights. Many political commentators have noted a staunch obstructionism on the right since Obama was elected. Current Senate leader Mitch McConnell admitted as much eight years ago, saying his allies would focus on foiling the president’s agenda. Gun control has become a casualty of this spirit of obstructionism—and of the larger culture war.

As Obama presciently observed during his first presidential election, conservative, red state Americans “cling to their guns” out of fear and anger. Baum points out that the “gun guy” demographic is largely white, male, lower to middle class, rural and suburban—a segment of the population that has lost considerable ground economically and politically during the past few decades. This population is no longer ascendant, and is resentful of its lot, and frustrated. They seek to assert their independence and autonomy, object to their condition, and claim political relevance. Guns, and expansive gun rights, are a proxy for all that.

Many on the left—and the middle—of the political spectrum wonder why so many Americans “cling to their guns.” Many wonder, with each mass shooting that shocks the national consciousness, when the country will finally be motivated to stem the flow of guns and the march of expansive gun rights. This will not happen until the political climate changes, and the culture war, or the intractability in Washington abates. Currently, gun control is a casualty of this divide—guns are the currency of those in fear of the future. When the political establishment, and the media that sustains it, is prepared to negotiate this divide, and diminish the fear and alarm on the right, only then will the nation be ready to rethink and remodel its fatal gun culture.

Firmin DeBrabander, an associate professor of philosophy at Maryland Institute College of Art, has written social and political commentary for numerous publications, including the Baltimore Sun, Common Dreams, Counterpunch, and the New York Times. He lives in Baltimore, MD. 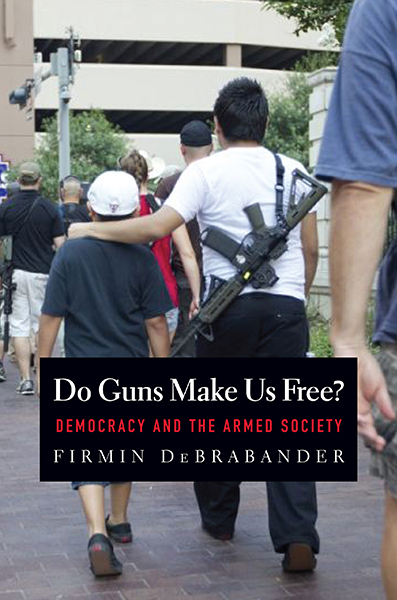