I want to highlight the dangers to Western civilization if Britain had succumbed to Nazi Germany in 1940. But to do this, first I’ll make the point, illustrated over the course of history, that the side that wins the war does not necessarily represent all that is best in civilized standards. The good guys, in the terminology used by a recent American President and the incumbent Australian Prime Minister, don’t always win.

This was the case in the Peloponnesian War (431-404 B.C.), when Athens (representing the good guys) was defeated by Sparta. This is not to say that Athenian democracy was anywhere near perfect, nor is it to deny that the Athenians to some extent courted defeat through hubris and the arrogant application of power. But they did give us the origins of philosophical thinking, the Parthenon, and a flourishing of art and science then unparalleled in the west. On the other side Sparta gave us militarism, infanticide, and institutional slavery.

A second example can be seen in the fall of the Western Roman Empire in 476 A.D. Gibbon regarded this as a disaster of the first order. (“I have described the triumph of barbarism and Christianity” was his acerbic and melancholy conclusion.) Recent scholarship exhibits considerable agreement with at least his first formulation. Bryan Ward-Perkins in his The Fall of Rome and the End of Civilization argues that its fall threw “the inhabitants of the West back to a standard of living typical of prehistoric times.” He notes also that the Romans always imagined that their world would continue unchanged—and that they were wrong.

There are many other historical examples of the good guys suffering catastrophic losses that could be included, but these two are sufficient for a comparison with the time of the Second World War. Looking at the war from the comfortable distance of 70 years, we generally assume that the defeat of Nazism was inevitable. Like the ancient Romans, we tend to believe that the West (a name I use as shorthand) will always continue along an upwards trending trajectory. But as history demonstrates, that belief can be misplaced. For example, the year 1940 demonstrates how events might have turned out otherwise, with consequences that were only too clear to Winston Churchill. In his Finest Hour speech Churchill foresees a world where Britain has suffered that terrible reversal of fortune. He says that if Britain fails “then the whole world, including the United States, will be plunged into a new dark age made more sinister and perhaps more protracted by the lights of perverted science.” As with so much he said in this year, this is not hyperbole but the unvarnished truth. As he spoke, Hitler’s scientists were developing fearsome weapons such as the V1, the V2, and jet aircraft, which were far in advance of anything possessed by the Allied Powers. Had Europe fallen then to Hitler, more would have followed, including almost certainly, atomic weapons. With these instruments at his disposal, what would have been the future of the West?

If at times I am impatient with Roosevelt and his tardy reaction to this threat (note I am not impatient with the American people, who were far ahead of him in sensing the danger posed by a Nazi victory), it is because the stakes were so high.

Robin Prior is professor of history at Flinders University, Adelaide, and author of six previous books. He lives in Adelaide, Australia. 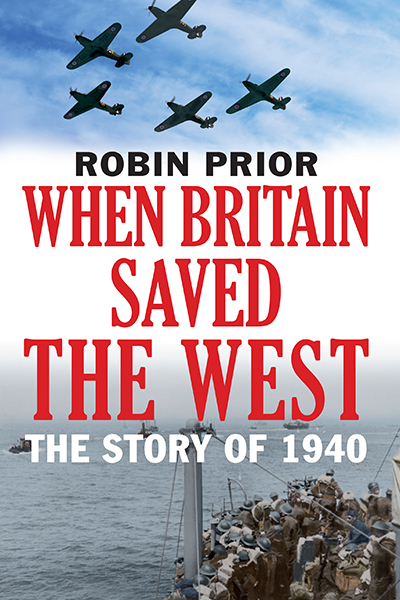