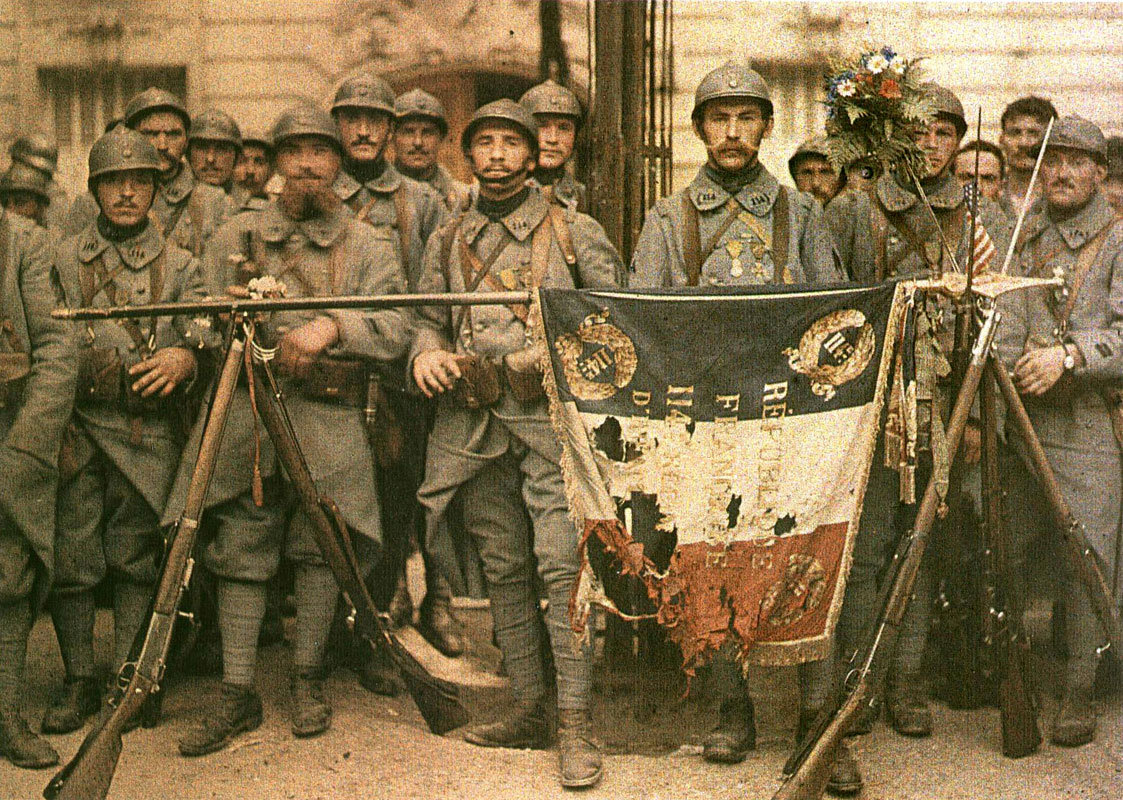 Louis Barthas kept vivid journals of his service as a French corporal in World War I. In honor of his birthday today, July 14th (which is also Bastille Day!), the following is an excerpt from the 1978 introduction to Poilu, his collected notebooks.

Louis Barthas was born on July 14, 1879, in Homps, in the département of Aude. He therefore was thirty-five years old at the time of the declaration of war in 1914; he was married, the father of two boys, Abel (eight years old) and André (six). From a modest family, he was an agricultural laborer at first, then a barrelmaker (tonnelier) and owner of several plots of vineyards. He settled in Peyriac-Minervois.

In order to write—very properly—the hundreds of pages of war memoirs, what education did he have? In fact, he left school with a certificat d’études primaires. But let us make clear that he ranked first in his district and won the Prix du conseil général. Thereafter he was an avid reader, eager to learn, curious about everything, assiduous reader of Victor Hugo, Émile Zola, Anatole France, and even Karl Marx and Jules Guesde. For Louis Barthas soon subscribed to socialism and to militant trade-unionism [syndicalisme]. In Peyriac-Minervois, he participated in the creation of the syndicat des ouvriers agricoles (agricultural workers’ union). A member of the Socialist Party, he was active in the Minervois alongside his future army captain in 1914, Léon Hudelle; Dr. Ferroul, of Narbonne; and Jean Jaurès, deputy from the Tarn.

In one of his notebooks, he writes: “I will always be faithful to my principles as a socialist, a humanitarian, even a true Christian.” Louis Barthas was a Catholic, but not an observant one. Tolerant, he became anticlerical due to the opposition of the Church to syndicalism and socialism. It was this Christian socialist, syndicalist, pacifist, and antimilitarist who remained under the colors from August 4, 1914, to February 14, 1919—that is, for four and a half years, mostly on the front lines, as a corporal in the infantry (and even some time as a simple private, after having been broken in rank for political reasons).

From the first day, he kept his notebooks, and his comrades soon knew that he was writing down “the story of [their] Calvary.” He wrote on whatever paper he had, on various pages sewn together with thread; his son has seen these first-draft notebooks, which were spattered with mud, gnawed by rats. At the same time, he sent numerous letters and postcards to his wife and his children, asking that they be preserved. The notebooks, letters, and cards then helped him, once demobilized, to properly write up the nineteen school notebooks (cahiers). He took on this task as soon as he returned home. It was his evening work, a duty to which he devoted himself: to put down what he had witnessed.

Was Louis Barthas a good witness? Around 1930, a scholar, himself a war veteran, Jean Norton Cru, brought out two books, Témoins (Witnesses) (1929) and the more accessible Du témoinage (1939). In these works, a scrupulous analysis established the fanciful character of certain successful works, and defined the qualities of a “good witness” (bon témoin). Louis Barthas possessed these qualities: he really knew the life on the front lines; his daily notes permitted him to not give himself over to his imagination; he knew how to see, showed himself to be curious about everything around him, noted things down with precision, reflected, and sought to understand.

Louis Barthas is a good witness. But do we need any more witnesses? We already know that the infantry was mainly cannon fodder, that the poilus lived in the mud, among rats and lice, that the attacks launched by Joffre in 1915 were criminal acts (throwing infantrymen in front of enemy machine guns without artillery preparation), that fraternization between Germans and Frenchmen took place along the front lines, that mutinies broke out in 1917, etc. It’s true. But with the accounts of Barthas, we are there! One remarkable account, among many others: that of fraternization between flooded trenches; it ends up in Occitan [the dialect of southwestern France].