The gradual ascent of Dwight Eisenhower’s reputation among historians has now been going on for more than forty years. Younger readers may not remember the time when Eisenhower was considered a passive incompetent, preferring to play golf or bridge than to lead his administration, and letting the country’s accumulating problems fester until they exploded in the social upheavals of the 1960s. The belief that Ike left foreign policy to his Secretary of State, John Foster Dulles, left domestic policy to his chief of staff, Sherman Adams, left the messy world of partisan politics to his rabidly anticommunist vice president, Richard Nixon, and was content to ride his wartime successes and the nation’s prosperity to two sweeping electoral victories—all that is discarded. Eisenhower is now seen as a near-great or great president.

In truth, the passive image never fit well with Ike’s career. He had graduated from West Point, had gained firsthand experience working in the United States, Latin America, Asia, Europe and Africa as he rose through the Army ranks, and during World War II had successfully managed the largest and most complex amphibious invasion in world history. He had interacted with Franklin Delano Roosevelt, Winston Churchill, and Charles de Gaulle and not only earned their trust but rewarded it with victory. He came to the presidency as a master at managing giant bureaucracies and as a man accustomed to being in command.

The re-evaluation of Eisenhower as president has not, however, been accompanied by a rethinking of much that went on in his administration. Many myths that emerged out of the belief in Eisenhower’s incompetence remain in common circulation today—not only among the general public but among professional historians. Most authors of books about postwar American politics prefer to write about Democratic administrations. Relatively scant attention is given to Republican administrations and politicians. Eisenhower left millions of documents at his presidential library, and twenty-one volumes of his papers are published and have been placed online, yet too few historians have consulted them. In my research, I was continually astonished to find myself reading important, revealing archives that previous scholars had not reviewed.

One myth that has gone largely unchallenged (with the significant exceptions of David Nichols’s book A Matter of Justice and Timothy Thurber’s Republicans and Race) concerns Eisenhower’s record on civil rights. Harry Truman is widely acknowledged as a champion of equal rights, and his successor as a bystander or worse. Yet while Truman ordered the integration of the armed forces, he did not demand that the order be enforced in areas that resisted it. Eisenhower insisted on integration throughout the military, including on bases in the South. Robert Caro, in Master of the Senate, describes how Lyndon Johnson was responsible for the passage of the 1957 Civil Rights Act. But an examination of the record shows that most of the credit belongs with the Eisenhower administration. Overall, Eisenhower and Nixon were far more proactive in civil rights than either Truman or John F. Kennedy, both of whom had to rely on southern Democrats to get elected and to pass their programs through Congress.

Regarding Senator Joseph McCarthy, the overwhelming historical consensus is that the president sat by passively while the senator self-destructed. This view is inaccurate. After McCarthy proved unwilling to cooperate with the administration and then began attacking Ike’s beloved institution, the Army, the president orchestrated the senator’s downfall.

Although Eisenhower’s stature has risen dramatically, Richard Nixon’s vice-presidential contributions have hardly moved beyond the cartoonish depictions circulated by his opponents on the campaign trail. Nixon left millions of documents on his vice presidency at his presidential library, an archive that I consider the best collection on right-of-center American politics in the second half of the twentieth century. No one besides myself has examined them systematically.

Instead, many authors have repeated the erroneous allegations of their predecessors, with the result that some falsehoods are so widely circulated that they have been accepted as historical fact. Many of these reflect the theme that Eisenhower disliked Nixon and never entrusted him with important assignments.

This alleged antipathy is supposed to have begun in September 1952, when a controversy over a fund maintained for Nixon’s Senate office threatened to cost him his place on the presidential ticket. To clear his name, Nixon had to give a nationally televised speech, which became known as the “Checkers Speech.” Eisenhower, watching the speech from a lounge in Cleveland and taking notes on a yellow legal pad, is supposed to have grown so disgusted by his running mate’s performance that at one point he angrily jabbed his pencil into the pad, tearing the page. But Eisenhower’s notes exist—they are reproduced and transcribed in The President and the Apprentice—and not only are they laudatory, they are completely undamaged.

Eisenhower could have called for Nixon’s resignation from the ticket. That he did not was no mystery when Ike was seen as a political naïf whose main role was to wave to adoring crowds and follow his handlers’ instructions. Once it is acknowledged that Eisenhower was actually in charge of his administration, Nixon’s continued presence becomes a paradox to which only an open-minded study of their interactions provides the answer: Eisenhower liked Nixon. He valued Nixon’s political instincts, his hard work, his intelligence, and yes, his character.

Eisenhower could have removed Nixon from the 1956 reelection ticket. Newspapers ran banner front-page headlines on the “Dump Nixon” effort shortly before that year’s Republican National Convention, arguing that it demonstrated the friction between Eisenhower and his vice president. But “Dump Nixon,” as far as the Republicans were concerned, existed largely in the mind of Harold Stassen, who wanted to remove Nixon from contention for the 1960 presidential nomination in order to further his own ambitions.   Eisenhower, who was wildly popular and certainly did not need Nixon’s help to get re-elected, never seriously considered removing him from the ticket. Ike forced Stassen to second the vice president’s nomination.

Nixon became the Republican lightning rod during the political campaigns of the Eisenhower years. The president maintained an image of being above partisan politics, leaving Nixon as the party’s primary national spokesman on partisan matters. He performed tirelessly and effectively in this role, earning gratitude from Republicans that would serve him well in his own presidential campaigns. His efforts also earned him the lasting animosity of Democrats, who never quite understood that Nixon’s exaggerated political rhetoric was matched by their own. What is less well known is that Eisenhower, behind the scenes, took a keen interest in Nixon’s efforts and privately coached his vice president on how to attack Democratic rivals.

Another paradox concerns foreign policy. Where did Nixon gain the experience he needed to execute such an effective foreign policy as president? Before he became vice president, his only overseas experience consisted of military service in the South Pacific during World War II and, as a congressman, one tour of Europe with the Herter Commission in 1947. From the time he left the vice presidency in 1961 to the time he entered the White House in 1969, he was a private citizen. Yet most accounts of Nixon’s foreign policy involvement during the Eisenhower years begin and end with his near-death experience in Caracas during the 1958 riots and his pointing a finger at Nikita Khrushchev at the 1959 American Exhibition in Moscow.

Early in his administration, Eisenhower’s detractors claimed that Secretary Dulles shaped United States foreign policy. Dulles and Eisenhower both denied this, but the myth persisted. After Eisenhower left office and President Kennedy launched the failed Bay of Pigs invasion, Kennedy’s advocates argued that Eisenhower planned the operation —a claim that still has supporters—and this disaster added to the myth of Eisenhower’s incompetence and disengagement. (Eisenhower denied that he had anything to do with planning the invasion, and there is no record to show that he did.) In fact, Eisenhower directed American diplomacy from the beginning of his term, in intimate collaboration with his secretary of state. Nixon became increasingly involved with this effort. He also worked closely with Dulles, and the two men became good friends.   Eisenhower again and again sent Nixon on critical foreign missions that helped to give him the experience that made him one of the best-trained men in foreign affairs to reach the presidency.

Historians are charged with sorting out myth from fact: to separate what we would prefer to have happened, or what conventional wisdom tells us, from what actually did happen. Even as his overall reputation has ascended, prejudices about the Eisenhower White House have lingered unchallenged. He was an activist president and skillful manager determined to address the issues confronting the country, and interested in having around him those people who would help advance his administration’s goals.

As for Nixon, the Watergate scandal clouds his vice presidency. Those who would paint him solely in dark colors seem unable to acknowledge that he could have assisted in McCarthy’s downfall, the advancement of civil rights, or the successful formulation of foreign policy. While Vice President Nixon had some weaknesses, his overall record was superb.

If we are to understand the Eisenhower presidency, we must first reexamine perceptions based on legend and partisan distortion. Received wisdom dies slowly and ever so grudgingly, but eventually it gives way to facts.

Irwin F. Gellman is the author of four previous books on American presidents. He is currently at work on a volume on Nixon and Kennedy. He lives in Parkesburg, PA. 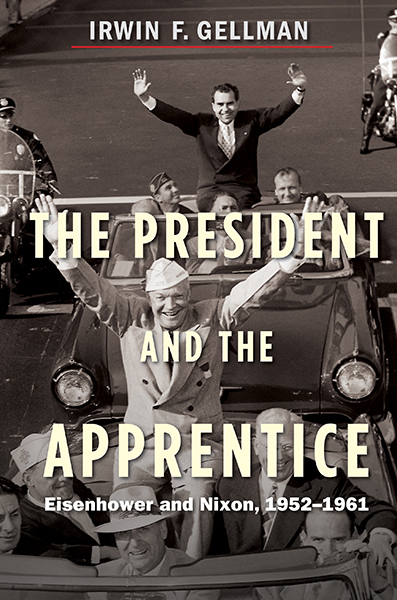 Featured Image: Photograph of General Dwight D. Eisenhower, the Republican nominee for President, at Washington National Airport with his running mate, Senator Richard M. Nixon of California, Nixon’s family, and other well-wishers by Abbie Rowe via Wikimedia Commons in the public domain.