Gustave Caillebotte has always occupied a divided place in the history of art. Although he exhibited almost exclusively at the Impressionist exhibits in the late 1870s and early 1880s, he was marginalized early on as “an Impressionist in name only.” In the century that followed, his art was all but forgotten, even as his art collection came to form the core of what is now the Musée d’Orsay. Since his revival in the 1970s, Caillebotte’s paintings have entered the canon of nineteenth-century art, occasioning extensive commentary by scholars of all stripes. Yet opinion remains split about his artistic accomplishment.

A major exhibition, Gustave Caillebotte: The Painter’s Eye, now at the National Gallery in Washington D.C., before moving to the Kimbell Art Museum in Fort Worth, might just give the public a much-needed opportunity to reassess the artist’s career. For the first time in twenty years, famous pictures such as the 1875 Floor Scrapers from the Musée d’Orsay and the 1877 Paris Street, Rainy Day from the Art Institute of Chicago can be seen next to each other, and alongside stunning early works from private collections. Later portraits, still lives, and landscapes, including the 1886 Roses, Garden at Petit Gennevilliers, also fill the galleries, and for the uninitiated, the differences between early and late Caillebotte will be confounding. In his otherwise glowing review of the exhibit, Holland Cotter no doubt speaks the consensus view: “Caillebotte’s work is uneven over all.” To say there is a drop in artistic quality and intensity in the 1880s is perhaps too reductive, but there is a notable difference in both style and subject matter between early and late Caillebotte. This division in the artist’s career has puzzled viewers from early on, and it has typically been explained as an attempt to bring his own painting in 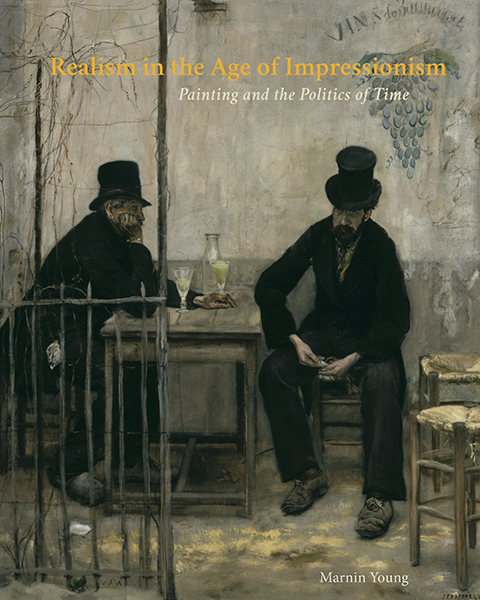 line with the Impressionist techniques he had come to champion and collect. This is no doubt true, but as I show in my book, Realism in the Age of Impressionism: Painting and the Politics of Time, there is much more at stake in this division within Caillebotte’s artistic career.

Caillebotte’s art cannot be fully comprehended unless he is placed within his generation, a generation of painters born around 1848 and still oriented to the mid-century Realism which dominated French art during their youth. In addition to academic realists like Jean Béraud and Giuseppe de Nittis, both of whom were close to Caillebotte in the early 1870s, this “later Realist” group of painters can be said to include such disparate figures as Jules Bastien-Lepage, Alfred-Philippe Roll, Jean-François Raffaëlli, and even younger artists like the Belgian James Ensor in his earliest phase. These painters consistently pursued a revival of mid-century practices of painting, notably an emphasis on durational temporalities that sat in tension with Impressionist instantaneousness.

Caillebotte’s early pictures consist of carefully-observed, meticulously-rendered paintings that invite extended viewing, even if their motifs might imply a passing moment. Shown at the Impressionist exhibit of 1876, The Floor Scrapers is in almost all respects a painting that Gustave Courbet could have done. It is fairly clearly an homage to the older Realist’s Stonebreakers, not least in the suggestion of the ongoing repetitive actions of manual labor. For reasons that are political in nature—Courbet was in political exile for his involvement in the revolutionary Paris Commune of 1871—critics largely avoided this comparison. For some, like Émile Zola, the more obvious reference was photography. In 1877, Paul Sébillot agreed, claiming that Paris Street, Rainy Day, “gives an idea of what photography will be like when the means have been found to reproduce the intensity and delicacy of color.” Mario Proth went even further to assert that Caillebotte needed little else for his works to “resemble instantaneous photographs, photochromes playing rather skillfully at painting.” In fact, such claims constitute only one part of a widespread discussion about photography, painting, and time in the 1870s. This discourse immediately affected the artistic developments and critical understandings of all the later Realist painters, but none so much as Caillebotte.

In 1878, Caillebotte was pushed to abandon the equation of his painting with photography, and in turn Realism, to embrace more fully the transient effects of light in Impressionism. More than anything, the conceptual possibility of instantaneous photography—even before it was publicly confirmed when Eadweard Muybridge’s split-second exposures appeared in late 1878—made it difficult if not impossible to maintain Realism’s temporal concern with duration and repetition. Soon enough, paintings built out of careful observation and detailed rendering began to read almost exclusively as instantly-captured photographs. Some painters committed to a slowly-crafted Realism turned increasingly to motifs that could evade this shift—Roll’s 1880 Strike of the Miners and Raffaëlli’s 1881 Absinthe Drinkers are two key examples—but others, like de Nittis and Béraud, embraced it under the sign of Naturalism.

Caillebotte’s stylistic shift did not take place in isolation. Nor was it the result simply of his personal predilection for the art of his friends. His crisis, and the peculiar strategies they produced in his art after 1878, was in fact quite typical of his entire generation. A closer examination of the artistic development of this Realist who became an Impressionist nonetheless reveals much about the emergence of temporality, both durational and instantaneous, as a central stylistic motif in the art of the late nineteenth century.