Robert A. Dahl in the Classroom via Wikimedia Commons in the public domain

Robert Dahl died on February 5, 2014 at the age of ninety-eight. He might well have been the most important political scientist of the last century, and he was certainly one of its preeminent social scientists. In many ways, Dahl created the field of modern political science, understood as the systematic use of evidence to evaluate rigorously stated theoretical claims. Generations of Dahl’s successors have developed both theories and empirical methods since he produced his innovative works in the 1950s and 1960s. Few would deny that they stood on Dahl’s shoulders.

One illuminating window into Dahl’s scholarship is to view him as having been engaged in a lifelong dialogue with James Madison. Dahl had great respect for the founding generation. Madison’s contention in Federalist Number 10 that multiple factions could make democracy viable on a large scale might be the earliest statement of the logic of crosscutting cleavages on which Dahl would build his pluralist theory of democracy.

But the founders’ institutional theories were another matter. In A Preface to Democratic Theory, published in 1956, Dahl developed a trenchant critique of the separation of powers in general, of judicial review in particular, and of the system of representation that the founders devised as part of what turned out to be a vain attempt to head off civil war over slavery.

Dahl studied democracies all over the world, but usually with the United States in mind as a comparative benchmark. Although he disagreed strongly with Madison on many points, he thought that the bulk of the founders’ mistakes derived from the challenge of creating a large-scale democracy for the first time—without our advantages of accumulated evidence and hindsight.

Dahl was gratified to discover that Madison’s post­-Federalist Papers political experience led him to abandon his antipathy for political parties and, eventually, his hostility to majority rule as well. In Dahl’s afterword to the fiftieth anniversary edition of A Preface to Democratic Theory published in 2006, he noted with appreciation that in 1833, three years before his death, Madison had declared that critics of majority rule “must either join the avowed disciples of aristocracy, oligarchy or monarchy, or look for a Utopia exhibiting a perfect homogeneousness of interests, opinions and feelings nowhere yet found in civilized communities.”

On Democracy was published in 1998. Dahl conceived of it as a guide to the democratic systems of the contemporary world and a sketch of the main challenges that they faced; a kind of fin de siècle stocktaking. The twentieth century had been one of major triumphs and shocking failures of democracy. The franchise had finally become universal. Exclusions based on race and gender were abolished in the older democracies, and architects of new democracies took universal adult suffrage for granted. But democracy suffered major setbacks in the middle third of the century with the rise and catastrophic consequences of fascism and communism.

On balance, Dahl concluded that things looked good for democracy at the turn of the century. Whether measured in absolute numbers or as a proportion of the world’s population, more people lived in democracies than ever before. And although non-democratic regimes still outnumbered democracies (a ratio that would soon reverse itself), Dahl identified an unprecedented sixty-five democracies.

To be sure, Dahl was no teleologist. He noted that despite democracy’s ancient lineage, it had vanished from the face of the earth for centuries. In principle that could happen again. But it seemed to him unlikely, given democracy’s near-universal status as the font of political legitimacy in the contemporary world—reflected in the fact that most authoritarian leaders claim popular authorization and most authoritarian systems are portrayed as democracies or as peoples’ republics of some sort. It is not surprising, therefore, that On Democracy spends little space on the disappearance of democracy. Rather, Dahl identifies the three future challenges as whether more non-democracies will democratize, whether new democracies will become consolidated, and whether the older ones will “perfect and deepen their democracy.”

Dahl wrote two books after On Democracy: How Democratic is the American Constitution?, published in 2002, and On Political Equality four years later. In the first he expanded his long-standing critique of American institutions, arguing that they should be reformed in more democratic directions. In particular, he stressed that the Supreme Court’s role should be limited to protecting “the fundamental rights that are necessary to the existence of a democratic political system.” The more the Court strays from this democracy-reinforcing mandate, he argued, the more it becomes an unelected legislature that enacts laws and policies “in the guise of interpreting the Constitution—or, even more questionable, divining the obscure and often unknowable intentions of the Framers.”

On Political Equality offered a more somber assessment of the advanced democracies, and especially the United States, in light of the dramatic increases in inequality that had been in train for the better part of three decades by the time he wrote. In place of asking questions about “deepening” democracy by extending it to other spheres of life, notably the economy (which he had first proposed in A Preface to Economic Democracy in 1985), Dahl was now worried that inequality might contribute to democratic backsliding.

Just as Madison had come to fear that the monied interests Alexander Hamilton championed in the early 1790s would destroy America’s nascent democratic order, Dahl felt pressed to ask whether inequality might compromise democracy fundamentally. These concerns were well founded. Ironically, in view of Dahl’s long-standing concerns about the Supreme Court, we have seen that, rather than protect the fundamental rights needed for the operation of democratic politics, the Court has aided and abetted democracy’s subversion by monied interests.

Adapted from the preface to On Democracy: Second Edition by Robert A. Dahl, with a new preface and two chapters by Ian Shapiro. Copyright 2015 by Ian Shapiro. 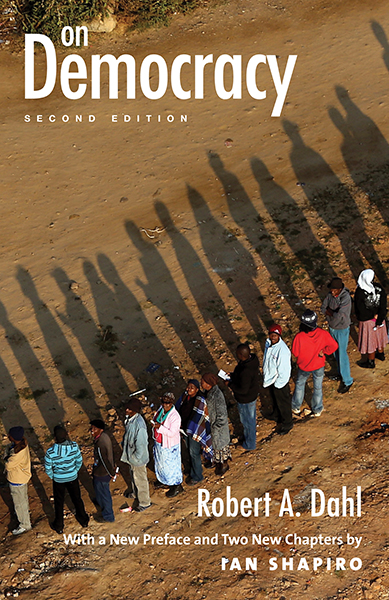