In 1936, Edwin Hubble compiled a book based on his lectures on nebulae and astronomical observation. Hubble’s landmark contributions to astronomy include his conclusion that there are galaxies beyond the Milky Way and his demonstration that the universe is expanding. The following is an excerpt from his introduction, on the process of scientific research.

Science is the one human activity that is truly progressive. The body of positive knowledge is transmitted from generation to generation, and each contributes to the growing structure. Newton said, “If I have seen farther it was by standing on the shoulders of giants.” Today, the least of the men of science commands a wider prospect. Even the giants are dwarfed by the great edifice in which their achievements are incorporated. What a Newton might see today, we do not know. And tomorrow, or a thousand years hence, even our dreams may be forgotten.

This remarkable attribute of science is bought at a price—the strict limitation of the subject matter. “Science,” as Campbell remarks, “deals with judgments concerning which it is possible to obtain universal agreement.” These data are not individual events, but the invariable associations of events or properties which are known as laws of science. Agreement is secured by means of observation and experiment. The tests represent external authorities which all men must acknowledge, by their actions if not by their words, in order to survive.

Science, since it deals only with such judgments, is necessarily barred from the world of values. There no external authority is known. Each man appeals to his private god and recognizes no superior court of appeal. Wisdom is a personal achievement and is difficult to transmit. Sarton writes:

The special methods of science are efficient and powerful when they are used within their proper field—the region closed and bounded by the necessity for agreement on the subject matter. The methods are so successful, indeed, that attempts are constantly made to apply them in other fields—to the study of things as they should be rather than things as they are. The results are seldom convincing. The calculus of values, if it is ever formulated, will probably have little in common with the calculus of science. Nevertheless the atmosphere of scientific research—the disinterested curiosity, controlled imagination, and passion for impersonal tests—is by no means unique. It may, and often does, produce a definite influence in those fields from which scientific technique is barred. That influence, the man of science likes to believe, is generally beneficial. The special methods of science will be discussed hereafter, but they are characterized by the remark that research attempts to discover laws and to explain the laws by theories, the ultimate goal being the understanding of the physical structure and operation of the world in which we live.

Actually, investigations are carried out in various ways, two of which may be mentioned as typical examples. One emphasizes the observational approach, the other, the theoretical point of view. The observer commonly starts by accumulating an isolated group of data, together with their estimated uncertainties. The material is studied, usually by graphical methods, and relations are found between various features.

The particular case of the red-shifts, or rather a simplified version of that investigation, has been discussed at some length because it offers a fair example of the observational approach. An isolated group of data is studied and the results are interpreted against the background of general knowledge. Then follows the process of extrapolation, and tests, and appropriate revision. The observations and the laws which express their relations are permanent contributions to the body of knowledge; the interpretations and the theories change with the spreading background. The research sweeps outward and develops an observable region around a given center—a realm of positive knowledge. Beyond the horizon, is the realm of speculation. The observer, if he ventures therein, can only throw his empirical relation into the blue, and search for inconsistencies with extrapolations from other centers.

The theoretical investigator, employing another method of approach, studies the isolated, empirical laws established by observers. He searches among them for some common element, some generalization by which he may collect various observed relations into a single statement. In short, he strives to invent a theory to explain the laws. The approach to the theory may be by logic or by intuition—it is immaterial which method is used. The important feature is the ability to explain the relations already observed, and to predict new relations.

A fundamental theory and the various relations that can be readily deduced from it, form a consistent pattern which may apply to certain aspects of the universe, or even to the universe as a whole. The author projects his pattern on the world around him in order to see how closely the two coincide. The known empirical laws naturally fall into place, if the author is competent, and new laws may be predicted.

Excerpted from The Realm of the Nebulae by Edwin Hubble, with new forewords by Robert P. Kirshner and Sean M. Carroll. Copyright 2013.

Edwin Hubble spent most of his illustrious career at the Mount Wilson Observatory, in Pasadena, California. 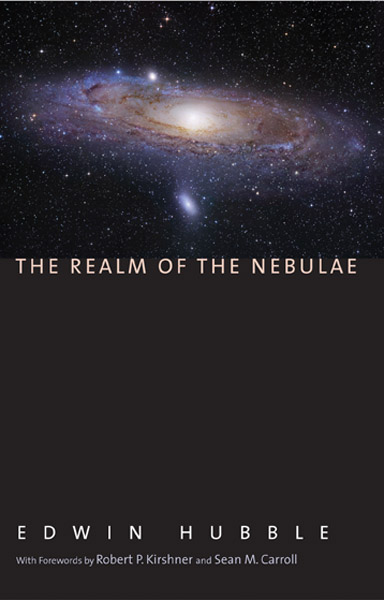