August 2015 marks the fortieth anniversary of the creation of monoclonal antibodies (Mabs). Invisible to the naked eye, Mabs are laboratory-produced antibodies derived from the millions of antibodies the body makes every day to fight foreign invaders. Since their birth, Mabs have radically transformed understandings about the pathways of disease, paved the way to faster, cheaper, and more accurate diagnostic testing on a vast scale, and have opened up new forms of treatment for over fifty major diseases.

Today six out of ten blockbuster drugs worldwide are Mabs. These are drugs that bring in over $1 billion in revenue each year. Mabs currently make up a third of all new introduced drugs. At least four Mab drugs are expected to gain regulatory approval per year in the next few years. Approximately 70 Mab products are predicted to have reached the worldwide market by 2020, with combined worldwide sales of nearly US$125 billion.

Where Mabs have had some of their strongest impact has been in the cancer field. One of the key advantages of Mabs is that they specifically target cancer cells while avoiding healthy cells. This means that they cause fewer debilitating side effects than more conventional chemotherapy or radiotherapy. In addition to this, Mabs provide an important tool to harness the body’s own immune system to fight cancer, an approach known as immunotherapy. Overall, Mabs are helping to shift cancer from being a terminal disease to a chronic condition. Some idea of how far Mabs are transforming cancer can be seen from the announcement, made at the American Society for Clinical Oncology’s annual meeting in June 2015, that a combination of two Mab drugs managed to shrink tumors in fifty-eight percent of patients with terminal melanoma (skin) cancer, one the deadliest forms of cancer.

Mabs have not only brought major changes to the treatment and outlook of cancer, but also to a range of chronic inflammatory and autoimmune disorders. Importantly, they have moved treatment away from merely relieving symptoms to targeting and disrupting their cause. Where they have had some of their most success has been in the treatment of rheumatoid arthritis (a disease of the joints), Crohn’s disease (a gut wall disorder), ulcerative colitis (large intestine disorder), psoriasis (a non-contagious skin disease), and ankylosing spondylitis (a spine disorder).

Aside from cancer and autoimmune disorders, Mabs are being used to treat many other types of disease, including allergic conditions like asthma, age-related macular degeneration (an eye disorder), multiple sclerosis (a neurological disease), and osteoporosis (brittle bones). They are also under investigation for the treatment of central nervous disorders such as Alzheimer’s disease (a degenerative brain disease), metabolic diseases like diabetes, and the prevention of migraines. More recently, they were explored as a means to combat Ebola, the virus disease that ravaged West Africa in 2014.

Therapeutics is just one of the many areas where Mabs have had a profound impact on medicine. They have also brought major changes to the diagnostics field. Here they have opened up the means to detect numerous diseases previously impossible to identify until they reached an advanced stage. Mabs have also been at the forefront of public health efforts, helping to screen blood for infectious diseases such as hepatitis B and acquired immune deficiency syndrome (AIDS). Governments also rely on them to detect the spread of diseases released by biological weapons such as anthrax and smallpox. They are also intrinsic components in over-the-counter diagnostic tests for ovulation, pregnancy, menopause, and many other conditions, and on the front-line in spotting a heart attack. In addition to their use for diagnosis, Mabs are vital to the process of typing blood for transfusion and of typing tissue for organ transplants.

Yet, despite the importance of Mabs in everyday healthcare, their existence is relatively unknown among the general public and the story of their development little told. Their journey into the world all began when César Milstein, an Argentinian émigré, arrived at the Laboratory of Molecular Biology in Cambridge, the same laboratory where Watson and Crick discovered the structure of DNA. It was to be here that Milstein, together with Georges Köhler, a German post-doctoral researcher, pioneered the seminal technique for the production of Mabs in 1975 and showed their clinical application for the first time. Their breakthrough was rooted in the search for a research tool to uncover the mechanism behind the diversity of antibodies. This had been a quest of scientists since the late nineteenth century.

One of the noticeable features in the story of Mabs is how few at the time grasped the significance of Milstein and Köhler’s achievement. It was not only missed by the editors of Nature, who cut short Milstein and Köhler’s article outlining the new technique, but also by staff at the British National Research Development Corporation, who decided not to patent it because they could not see it having any commercial application.

Despite this inauspicious beginning, within a short time many scientists began exploring the potential of the technology. This interest was in part galvanized by Milstein, who rapidly began distributing his cells and welcoming researchers from all corners of the earth to learn the technique. Within a short space of time, his cells had traveled to many different laboratories around the world and laid the basis for what is today a multimillion dollar international industry.

One of the lesser-known paths that Milstein’s cells took was to Cuba. This laid the foundation for the building of the country’s Center of Molecular Immunology. Today this Center is one of the leading developers of cancer immunotherapy. One of its most advanced Mabs is against the epidermal growth factor receptor (EGFR), a molecule found on the surface of many types of cancer cells. The compound has already received marketing approval in twenty-three countries, mainly developing ones, and elsewhere it is in advanced clinical trials. This includes trials in the USA. It is used as a treatment for malignant brain tumors, head and neck cancer, and some other solid tumors, and has fewer and milder side effects than other anti-EGRF antibodies in worldwide clinical use.

Lara Marks is the managing editor of whatisbiotechnology.org and author of The Lock and Key of Medicine: Monoclonal Antibodies and the Transformation of Healthcare. She is also the author of Sexual Chemistry: A History of the Contraceptive Pill. She lives in Kent, UK, and has research affiliations with King’s College London and Cambridge University. 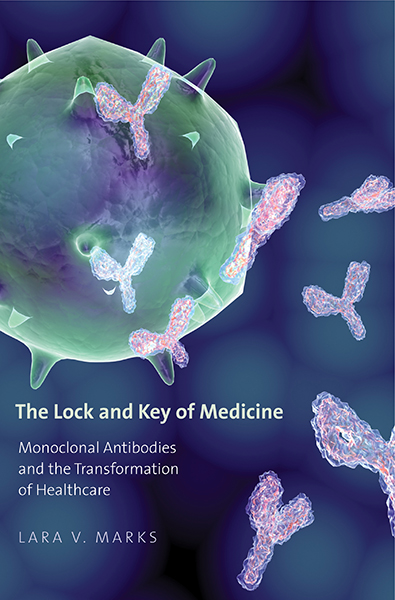 Featured Image: B0007277 Monoclonal antibodies by Wellcome images via Flickr under a Creative Commons license