Dieter Helm’s The Carbon Crunch takes a look at the world’s failure to adequately address climate change and proposes pragmatic, much-needed solutions. The following excerpt is from the preface to the revised and updated edition.

The underlying position continues to deteriorate. In 2012, another 2 parts per million (ppm) of carbon dioxide (CO2) were added to the atmosphere, followed by another 2.8 ppm in 2013 and roughly the same again in 2014. Roll forward to 2030 and the total will be close to 450 ppm, up from the current 400, and close to twice the pre-industrial levels—a Paris agreement notwithstanding. Coal power stations have continued to be built on an enormous scale in China and India. Indeed Europe—and notably Germany—has been back in the new coal power stations business again, and mining yet more lignite too. Though some action has been taken to reduce the overhang of emissions credits, the European Union’s Emissions Trading Scheme (EU ETS) remains pathetically weak, with a carbon price too low to make much difference.

The international negotiations in the run-up to the Paris conference in 2015 have kept lots of bureaucrats and campaigners busy, but still offer little hope of significant progress. China will go on increasing its emissions until 2030, and India is likely to peak even later. In the meantime, consumers fret about their energy bills, and are beginning to mount the inevitable backlash against the renewables policies that they were told would not cost them much. Politicians are as a result scrambling to cut subsidies for current renewables, reinforced by fossil fuel prices which stubbornly refuse to rise as the politicians so confidently predicted, and instead follow the inevitable economic path dictated by supply and demand.

The case for a big emphasis on R&D is simple: existing renewables cannot make much of a dent in emissions. They are mostly low-density and intermittent, requiring lots of land, shallow seas and water supplies. We need to develop more efficient—next-generation—renewable technologies. My critics have failed to explain how yet more wind turbines, solar panels and biomass plants can solve climate change (with nuclear in global retreat). They can’t, and they won’t.

The reason why the R&D route has not been given the priority it needs can be elucidated by following the money. Climate change policies are a magnet for rent-seeking lobbyists and vested interests—especially those associated with current renewables and nuclear. I make the observation that there are limited monies to spend on climate change. Policies will not work if consumers cannot afford to pay (either through their bills or their taxes). This is self-evident. But then the consequence: the money has to come from spending going somewhere else. I argue that some proportion of the enormous spending on current renewables should be diverted to future renewables. It does mean cutting subsidies to wind farms and current solar in order to increase support for R&D. This suggestion has got the lobbyists receiving the current subsidies up in arms.

Yet facts will out. The reality of rising emissions cannot be avoided. The numbers pile up. At some stage there will have to be a reassessment. New initiatives and policies will be needed. They are unlikely to come from Europe. Its bid for world leadership failed at Copenhagen, and the future of the climate lies mainly with China, India and the US. For the US at least, there are grounds for some optimism. It has ended up, more by accident than design, with a more coherent approach to climate change than the Europeans, who regularly castigate the Americans. The US is getting out of coal and into gas. It is contemplating significant support for R&D. It might even be starting to think about a carbon tax.

The gap between what needs to be done and what is being done remains very large . . . but the first step to a better way forward is to shine a torch on what has been going on, demonstrate why it is unlikely to work, and set out some alternatives. Whether we take the necessary steps, however, remains to be seen.

Excerpted from The Carbon Crunch: Revised and Updated by Dieter Helm. Copyright 2012.

Dieter Helm is professor of energy policy, University of Oxford; fellow in economics at New College, Oxford; and professorial research fellow at the Smith School of Enterprise and the Environment, Oxford. He is chair of the world’s first Natural Capital Committee. 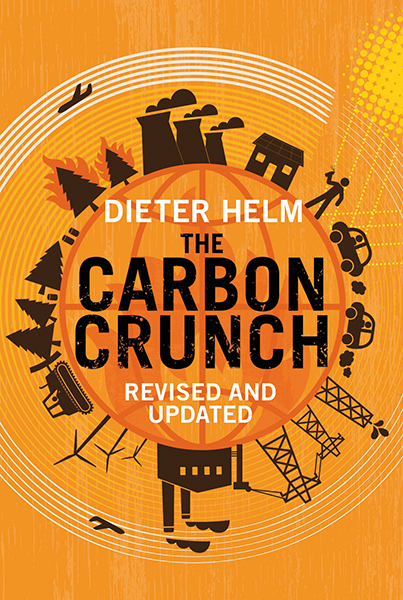