The story of the Toulouse mill companies begins with geography—in particular the swift, steady flow of the Garonne River, which falls twelve meters in its course through the city. Harnessing this wonderful motive force required significant capital investment and also the ability to accept significant risk. The dams and mills built to capture the flow of the Garonne were subject to periodic, destructive floods. The first documented mills, dating to the twelfth century, began as boats anchored off shore in the Garonne stream. These floating mills were financed by pooling capital through a particular medieval partnership structure termed pariage; this arrangement, among other things, provided for the perpetuation of the partnership beyond the lifespan of its founders and the free sale and transfer of the shares. Dozens of small mill companies financed by partnership shares, called uchaux, operated in Toulouse nearly through the fourteenth century, collecting revenues from grain milling as well as from fishing rights, and probably competing for business and favorable locations in the Garonne.

The process by which the mills consolidated themselves into corporate entities . . . began with sharing of expenses and risks. A mutual insurance arrangement against the risk of destruction by flood existed from 1194 among the independent mills that became the Honor dels molis del Castel Narbonens. This early pooling of risk constituted an important intermediate step toward consolidation. The Honor dels molis del Castel Narbonens firm was explicitly constituted in 1418, and the consolidation of the firms around the Bazacle occurred even earlier. The document of incorporation for the Honor dels molis del Bazacle survives in the Toulouse archives, a twelve-foot-long manuscript dating from 1372 written in a mixture of Latin and Occitan. It records what can arguably be identified as the moment of creation of the oldest known corporation. It contains the legal self-identification of the firm, company by-laws, valuation of the properties contributed into the firm, and the establishment of shares. Remarkably, the firm created in that year existed continuously until 1946. It was nationalized when the French public national electricity company, EDF, was created (the Bazacle mills switched to electricity production at the end of the nineteenth century). EDF still maintains a milldam and water turbines on its original location in the Garonne. Thus, not only is the Honor dels molis del Bazacle the earliest known corporate entity, it survives in nationalized form to the present day. In a sense, the Bazacle mills are now back on the stock exchange: part of the capital of EDF has been listed on the Paris Bourse since October 2005.

We observe that at least four features of the Toulouse local system favored the emergence of the mill companies. First, primogeniture was not the dominant form of inheritance (Dognon, 1896). As a result, inherited assets were held in joint ownership (pariage)—sometimes by many owners (Gallet, 1935). Second, the law facilitated the seizure of a debtor’s property in order to repay his or her debt (Castaing-Sicard, 1959). Third, the Capitouls organized an efficient way for third parties to auction properties of a debtor (Castaing-Sicard, 1959). And fourth, the exchange of properties was considered to be an irrevocable sale (Castaing-Sicard, 1959). These laws facilitated the growth and survival of the firms at key moments in their histories. The exchange of properties between pariers was used when the original independent mills were merged in the fourteenth century to form the two large mill companies. Following the capital calls on shareholders after the destruction of the mills by flood, the uchaux of pariers who were not able or willing to cover their share of the mills’ expenses (the talho) were seized and auctioned, providing capital to the firm rather than weighing it down in a lengthy legal dispute.

The remarkable institutional development of the Toulouse companies raises important questions about the corporate form. Was it invented independently several times in history? Does the corporation arise naturally as a solution to the problems of capital formation, allocation, and control? If this is the case, the Toulouse mill companies give us a chance to understand the conditions sufficient to allow corporations to appear and flourish. Conversely, if the modern corporation is the result of a single innovation, then the Toulouse mill companies suggest a much longer and richer process for its development, and challenge us to find the lineage of institutional development that led from these early firms to the modern business enterprise. They raise the question of what kept the “genetic code” of the corporation alive through the centuries, and how was it ultimately adapted to a broader range of enterprise.

Germain Sicard is a jurist and legal historian who served as Officer of General Affairs, Center for Historical Research, School of Practical Studies in France. 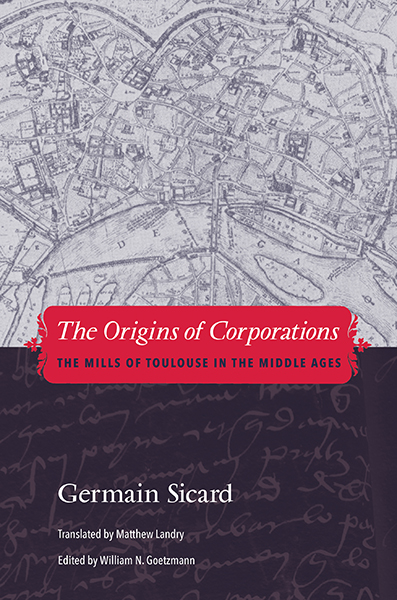