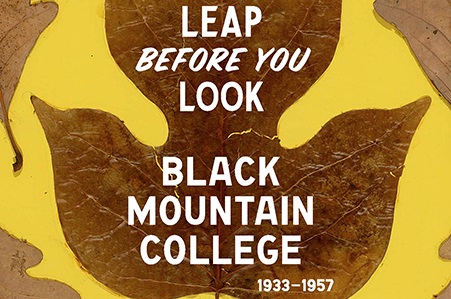 For your reading pleasure (and it is a pleasure): a sneak preview of an exciting, forthcoming book by Helen Molesworth, chief curator at the Museum of Contemporary Art, Los Angeles.  The book, Leap Before You Look, is a dynamic new look at the legendary Black Mountain College, a major incubator of the arts in midcentury America.

There is no such thing as a Black Mountain aesthetic, no dominant trend that unifies the artistic production of this small community. The work is too heterogeneous for that, and its practitioners were too idiosyncratic and individualistic to produce anything as old-fashioned as a style or, more aptly, a school. This state of affairs is a frustrating one for art historians, whose disciplinary task is to assemble and order, so better to explain how and why art objects come into being, how they operate, and what they mean. In the game of narrating the art of the mid–twentieth century one idea garnered a lot of traction: that of critic Clement Greenberg, who fortuitously visited Black Mountain in the summer of 1950, with his then lover, the painter Helen Frankenthaler. Two years earlier, he had written the still-important article “The Crisis of the Easel Picture,” in which he summed up the effect of the emergent ethos of Abstract Expressionism: “Just as Schoenberg makes every element, every voice and note in the composition of equal importance—different but equivalent—so these painters render every element, every part of the canvas equivalent; and they likewise weave the work of art into a tight mesh whose principle of formal unity is contained and recapitulated in each thread, so that we find the essence of the whole work in any one of its parts.” Even though Greenberg is specifically referring to the eruption of Abstract Expressionist painting in New York, his description applies equally well to the kind of thinking that pervaded the experiments at Black Mountain. Indeed, later in the essay, when he writes, “it corresponds perhaps to the feeling that all hierarchical distinctions have been exhausted, that no area or order of experience is either intrinsically or relatively superior to any other,” he sounds more like John Cage or Josef Albers than the grandfather of painterly formalism. But Greenberg was unable to sustain this openness and, in reviewing Willem de Kooning’s first one-person show in New York for the Nation that same year, he wrote: “de Kooning’s insistence on a smooth, thin surface is concomitant of his desire for purity, for an art that makes demands only on the optical imagination.”

Perhaps, in the end, Greenberg’s argument held so much sway because art that relies heavily on the optical can be better reproduced in photographic images. But the majority of art at Black Mountain might be called “extraoptical.” And if any description can encompass the whole of the Black Mountain aesthetic, it might be the haptic, as opposed to the purely optical. While the dictionary may define haptic as “relating to the sense of touch, in particular relating to the perception and manipulation of objects using the senses of touch and proprioception,” the word, when used in reference to works of art, denotes those works that engage visuality through an appeal to tactility. Haptic objects intertwine visuality and tactility so thoroughly that they are inextricable from each other.

Such a recasting, away from the prioritization of visuality, allows us to think about the production of woodworking, architecture, collage, and pottery nonhierarchically. Thinking through the matrix of the haptic might offer a way around now-hackneyed classifications of art and craft to permit a full engagement with the stated aims of Black Mountain, which was to enable “learning through doing.” There is a tacit assumption that “learning through doing” means using one’s hands and one’s brain, a disruption of the Cartesian model of subjectivity that privileges the mind over the body. At Black Mountain, there was a desire to teach students to become more aware of the world around by instilling in them respect for the acts of both perception and process, all in the service of honing their critical skills. Even though Albers’s stated aim was “to open eyes,” it’s hard to imagine that the teacher of the matière studies was interested solely in the “optical imagination”; and certainly Anni Albers’s commitments to exploring materials and producing both functional and nonfunctional weavings mitigate Greenberg’s claim that the fundamental role or purpose of art was in service to visuality alone.

The social fact of the Great Depression augmented Josef and Anni Albers’s commitments to the go-between of art and craft and to materials. In a culture of scarcity, Black Mountain students were encouraged to use the materials at hand in their work: this meant leaves were incorporated into collages and bark into matière studies, and students gathered stones from adjacent fields and forests to construct the buildings they designed. This catholic approach to materials resulted in scores of deeply tactile works, a quality extended through works across disciplines with no apparent coordination. Photographs of a pot by Karen Karnes or Marguerite Wildenhain are not merely flattened images of a three-dimensional object; we perceive the tactility of these objects—their sensuous curves (Karnes) and their regimented sculptural bas-relief (Wildenhain). On the one hand, it seems clear that pottery and weaving engenders less optically inflected material objects; on the other hand, it seems just as clear that photography produces some of the most flat and optical artworks. But, in a beautiful coincidence, photography as practiced at Black Mountain also consistently explored tactility. This was as true of Josef Breitenbach’s 1940s explorations of colored printing and photograms, which led to highly haptic abstract and representational images, as it was of Arthur Siegel, Harry Callahan, and Aaron Siskind’s strategies, which all accentuated the texture of whatever they were photographing. Similarly Hazel Larsen Archer’s extraordinary images of Quiet House focus on the textures of the building’s materials and heighten them with subtle framings of light and shadow. Student photos taken in Larsen Archer’s class—for example, Jacqueline Gourevitch’s pictures of woven chair seats and Robert Rauschenberg’s double exposure of filigreed foliage and his own image—also concentrate on the texture of their subjects.

And it wasn’t only visual artists who were working within the visual-tactile divide. Bauhaus theater teacher and designer Xanti Schawinsky called his theater productions “Spectodramas,” describing them thus: “‘Spectodrama’ comprises the fields of optics, form and color, acoustics, sound, language, music, time, space . . . architecture, technology . . . and illusion.” W. Pete and Elizabeth Jennerjahn also picked up on this interest in multisensorial experience in their Light Sound Movement workshop, which might be seen as an early iteration of Cage’s experiments with fully integrated yet wholly autonomous forms of performance in Theater Piece No. 1. While it is unusual to think of the haptic within the realm of music, it is hard not to consider the haptic qualities of Cage’s prepared piano; for Cage deployed the tactility of his instrument to render it “extra-aural,” showing that the haptic as a strategy was available to musicians as well. Indeed Cage’s extension of the haptic into the realm of music shows us how the haptic works to reorganize the senses and expand the body’s capacity for proprioception—the unconscious mechanism for perceiving one’s body in relation to movement and position.

What emerges here is neither a master narrative of the triumph of the haptic over the optic nor a consolidation of a house style. Rather, the concern with the haptic, shared across mediums, registers that one effect of interdisciplinary practice might be an unhooking of a one-to-one equation between sense and medium (looking and painting, hearing and music, for example): hence Anni Albers makes pictorial weavings, Cage prepares a piano, Josef Albers engages in acts of optical illusion attentive to material properties, and Aaron Siskind makes photographic images textural. All these works of art test the viewer’s perception, and many of them move into the realm of proprioception. When the senses become unhooked from a medium, the mind and the body find new ways of communicating sensory information. This detachment is not easily reproduced in slides and hence is not easily transmitted in an art-history classroom. Such maneuvers were deployed again and again at Black Mountain, and perhaps explain Merce Cunningham’s great innovation: the disconnection of the constituent parts of a dance (music, choreography, lighting, scenography), allowing them to function independently of one another in a way that literally pulls the viewer’s senses out of alignment with one another and reorganizes them.

The effects, or potential effects, of this new sensory capacity are subtle and verges on the synesthetic. M. C. Richards, who arrived at Black Mountain as a faculty member in literature and left as a student of pottery, wrote in her deeply influential book Centering: “Sometimes the skin seems to be the best listener, as it prickles and thrills, say to a sound or a silence; or the fantasy, the imagination: how it bursts into inner pictures as it listens.” She also recounts the words and actions of her first pottery instructor at Black Mountain, Robert Turner, who established the pot shop: “He was centering the clay, and then he was opening it and pulling up the walls of the cylinder. He was not looking at the clay. He had his ear to it. He was listening. ‘It is breathing,’ he said; and then he filled it with air.”