In the twenty-first century, the streets of L’viv in Western Ukraine beam with life. The central squares and coffee shops, packed with people into the wee hours of the night, look similar to squares in Poland’s Krakow, which is some six hours away by train, or Hungary’s Budapest and Austria’s Vienna, each an hour away by plane. The distance between L’viv and Budapest is similar to that between Lviv and Kyiv, the capital of Ukraine. Kyiv is, however, nothing like L’viv: coffee shop culture is almost alien there and the pace of life is different. Kyiv is a city of business; L’viv is a place of conversation.

L’viv’s architectural designs look Polish and Austrian because the city once belonged to both of those polities: it was part of the Polish-Lithuanian Commonwealth before 1772 and part of the Austrian Empire between 1772 and 1918, when it was the capital of Galicia, the largest province in the Austrian Empire, on the border with Russia. In this period before 1918, L’viv was governed by the Habsburg dynasty from Vienna and belonged to Germanic Central Europe, in the space between Italy’s Trieste and today’s Ukraine. Galicia contained parts of today’s Western Ukraine and southeastern Poland, including Kraków, another major city and cultural center. L’viv was then known as Lemberg in German and Lwów in Polish. German and French languages were part of the city’s culture, with thousands of men and women from all over Europe coming in and residing in Galicia before 1848. State bureaucrats, doctors, and teachers, they came from Vienna, Prague, Budapest, Trieste, and beyond, all of them speaking German in public and a variety of other languages, such as Czech, Italian, and French, at home. The early years of Austrian rule in Galicia between 1772 and 1848 marked the most cosmopolitan period in the history of the region now known as Western Ukraine.

The empire collapsed in 1918 and years of insecurity followed. In 1921, L’viv and most of former Galicia joined Poland. L’viv was occupied by the Soviet armies as part of the Soviet-German treaty in 1939, belonged to the Soviet Union until 1991, and has been part of Ukraine since then. The years of Soviet rule left their imprint on the region and its people. Outside of L’viv’s city center, in the country-side, the space looks more Soviet than Austrian, with living standards and social patterns that bear little similarity to places across the border.

The vibrant social life in L’viv is remarkable because its political climate in 2015 is so different from everywhere else in Europe. Mingling among the crowds in the city are men, and some women, in military uniform. Some are home on rotation and some are only preparing to be dispatched to the front, because the country is in a state of unannounced war. This war might seem elusive. The soldiers do not always fit in, but they cannot be ignored. Their presence is only one reminder of a conflict in Eastern Ukraine that is remote geographically but close politically. Hundreds or thousands of men and women from L’viv alone are deployed, and thousands more are anxiously expecting their relatives’ return home.

The conflict in the east is also a product of history. Eastern Ukraine, including Kyiv, belonged to the Russian Empire before 1918 and became part of the Soviet Union in 1922. Galicia was never part of the Russian Empire, and its history within the Soviet Union was shorter than that of its eastern counterpart. The seventeen years between 1922 and 1939 were crucial. In Eastern Ukraine, the Stalinist policies of artificial hunger and political purges between 1932 and 1938 cost the lives of several millions of Ukrainians, a demographic gap that could not be repaired by natural reproduction alone. The arrival of ethnic Russians and subsequent Russification created a new reality: the territories that had once been most Ukrainian of all were drawn into Soviet Russian culture.

Galicia never experienced the famine and the Stalinist purges of the 1930s.

However, L’viv saw an ethnic and demographic overhaul on a similar scale during the twentieth century. The city’s population was predominantly Polish before 1918, and a significant percentage of the area’s overall population was Jewish. Native Ukrainians resided mostly in the countryside. The war and Stalin’s post-1945 policies changed everything, and in the second half of the twentieth century, the city became predominantly Ukrainian. Western Ukraine has since been a corner-stone of patriotism and anti-Soviet and then anti-Russian resistance.

The radicalism and violence of the Russian Empire was alien to Habsburg rulers. Austrians never enforced assimilation and religion conversion as Russia did.

The earlier period of Austrian rule was not only the most cosmopolitan in all of Ukraine’s history, but also an era and space of unprecedented cultural and religious diversity, and above all peace. The Galicians were overwhelmingly loyal to the Habsburgs: no anti-Habsburg revolt took place in the empire before the explosion of World War I in 1914. The memories of Austria run strong in today’s L’viv—pro-Habsburg sentiments are even stronger here than they are in Vienna. The Austrian neighborhood carries associations of peace and stability. The Russian neighborhood carries associations of the opposite.

Iryna Vushko is assistant professor of history at Hunter College, City University of New York. She lives in New York. 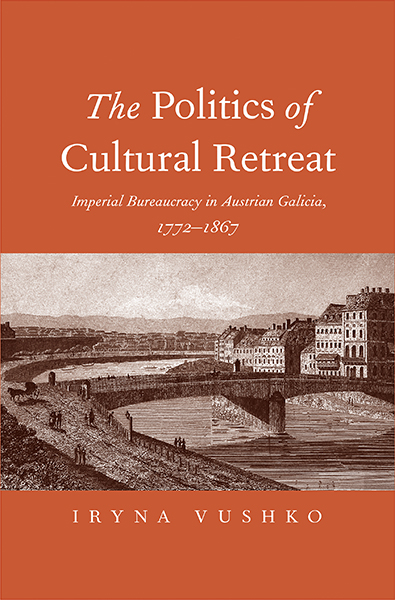