Nearly twenty years ago, while exploring links between natural soundscapes and music, my dear late father-in-law introduced me to the writings of Paul Shepard. The book, The Others: How Animals Made Us Human, contained a chapter titled “The Gift of Music.” One particular line in that section stood out: “Like much else in the human repertoire, music may have been already there when we arrived and its performance was everywhere audible and visible.” Shepard, a fine naturalist and professor of ecology, was not a musician. But he instinctively understood that the voices creatures produce not only validate life, but their acoustic output was also seminal to the cultures we humans shaped.

In my subject of Soundscape Ecology I record and study the sounds of organisms and the entire habitats in which they live. The beginnings of my odyssey into this field were shaky and intangible. At first, it was hazardous fun with no particular meaning or palpable direction, yet I deeply suspected that the messages within natural soundscapes were those of fundamental attachments—ones we needed to pay serious attention to. In a world otherwise informed by what we see, soundscapes began to reveal some magnificent surprises.

My initial resistance to this endeavor was likely the result of fear of and aversion to the animal world, feelings that my parents had instilled from early childhood. To these city folk, far removed from what they called “nature,” what was wild was at best a vague abstraction. At its worst, perilous. Then, at thirty years old, and quite by accident, I found myself recording outside in a nearby park not far from my San Francisco home. I was quite unprepared for the impact that moment would have on my life; in an instant, everything changed.

As someone who has ADHD, my first impression was that the stereo sound of the redwood forest habitat when transformed through my headphones not only brought details of the woodland sharply into balance, but also was profoundly consolatory at the same time. The combination of the acoustic space interleaved with the burble of a nearby stream, the calls and pulsing wing-beats of a pair of ravens as they soared over the canopy above me, and the hushed ambiance of ocean breezes wafting through the upper stories of treetops left me with the sense that I had found a numinous, tranquil corner in an otherwise tumultuous world. Gradually, I not only overcame my fear of being in the wild, far away and solitary, but realized that by enveloping myself in natural soundscapes my ADHD, too, became more controllable.

As a trained professional musician I had learned to hear, but not to listen. I, like a growing number of my colleagues, learned that I had to get out into the natural world, far away from human noise and distractions, to do that. As I spent more time in the field, I began to understand that the biophonies—the collective sounds produced by non-human vocal organisms in wild habitats—were immense narratives containing a great deal of useful data. I quickly realized just how complex these holistic manifestations were. For example, although they may be comprised of the same vocalizing creatures given the times of day and season, the combinations of sound are always evolving—a natural way of persistently testing for optimum transmission and reception. Even when the context and content of each performance remains constant, successive renditions are always different.

Also, I couldn’t help but notice the intricate ways in which these expressions are structured. As I recorded more frequently in rainforests close to the equator, where the density and diversity of vocal species are at their peak, I found that they contain discrete melodies, rhythms, harmonies, textures, and form. And when the biophonies are articulated as graphic illustrations, called spectrograms, they closely resemble contemporary musical scores where the highest sounding organisms are represented at the top of the page and the lowest sounding creatures at the bottom. In each biome, insects, reptiles, amphibians, birds, and mammals partition their voices, establishing distinctive acoustic niches based on time or frequency in which to vocalize. While the organizational models differ, the paradigm generally holds even in temperate, sub-arctic, and arctic regions of the planet. It is an evolutionary solution that helps prevent one creature’s voice from being masked by others. The arrangement into frequency and temporal niches closely resembles the manner in which instruments in an orchestra are scored, and in fact it is precisely from these phenomena that we humans learned our music; we mimicked what we heard in the African forests and plains where we initially found purchase.

Nevertheless, not only do these soundscapes inform culture, but they also address issues of habitat sustainability and health. The health of a habitat is unmistakably expressed in a ten-second graphic: where elements of the structure are clearly delineated and defined as spectrograms, the ecosystem is likely thriving and viable. Where the different elements appear to be randomly placed—chaotic with no discernible patterns—then the biome is probably under stress or compromised.

And finally, the most remarkable aspect of Soundscape Ecology is the amazing number of fields impacted by these phenomena that haven’t yet been fully explored. Aside from music, resource management, and medicine, they include subjects as far-ranging as philosophy, literature, religion, linguistics, architecture, anthropology, paleontology, natural history, physics (acoustics), environmental studies, sociology, theater, zoology, politics, and many, many others.

I was drawn to the sounds of the natural world primarily because they made me feel good. When an activity gives me as much joy and energy as this, curiosity takes over and I’m driven to know more. I grew up in a world that typically assesses everything from what we see. But I’ve learned that a much fuller understanding can be realized from what we hear. Natural soundscapes are the signature voices of the natural world. As we hear them we are endowed with a more complete story of life and the world we live in. In a matter of seconds, a soundscape reveals much more information from many perspectives, from quantifiable data to cultural inspiration. While a picture may be worth a thousand words, a soundscape is worth a thousand pictures. Our ears know that the whisper of every leaf and creature cries out for us to pay careful attention lest we still this divine expression at our own peril.

This audio clip is comprised of 4 fifteen second examples—1 minute total. It powerfully illustrates how that whole issue of climate change and the drought has progressed in one location over the past 11 years. The first segment was recorded in 2004. The second in 2009 (five years later). Again, in 2014, and the last in 2015. The recordings were made in exactly the same spot, mid April, and with carefully calibrated and repeatable settings, same protocol, same equipment. The lower half of the spectrogram shows the signature of a nearby stream which was flowing pretty normally in 2004 and 2009. The upper half is filled with several different species of birds (note how the species present in that habitat have found frequency bandwidth above that of the stream signatures). The 2004 was similar to the density and diversity of the previous 10 years at the same spot. In the 2009 segment, however, the bird vocalization density has dropped off a bit probably due to the spring season occurring 2 weeks earlier on average, now. But the stream is still flowing. In the 2014 segment, however, everything has changed. Three years into the most serious drought in 1200 years, the stream was no longer flowing and the bird density and diversity has dropped off to very low levels. This year shows something even more interesting; the avian diversity has shifted with new species occupying acoustic niches that the stream signatures once occupied, and with several of the other species gone, altogether. This confirms an earlier prediction posited in the niche hypothesis, the operation of which is predicated on vocal organisms finding unoccupied acoustic bandwidth within which to generate sound.

Bernie Krause is a soundscape ecologist, musician, and writer. He and the English composer Richard Blackford collaborated on The Great Animal Orchestra: Symphony for Orchestra and Wild Soundscapes, which premiered in the UK in 2014 with the BBC National Orchestra of Wales. He lives in Glen Ellen, CA. 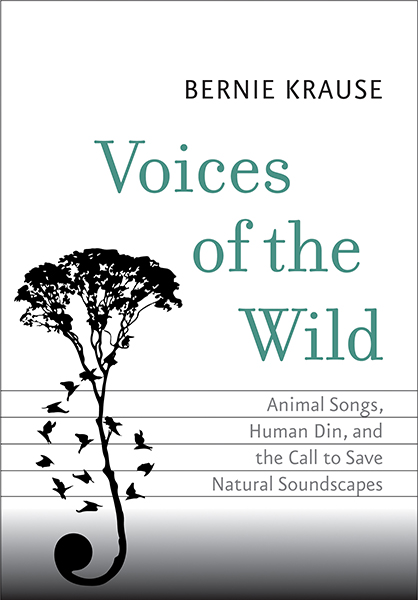