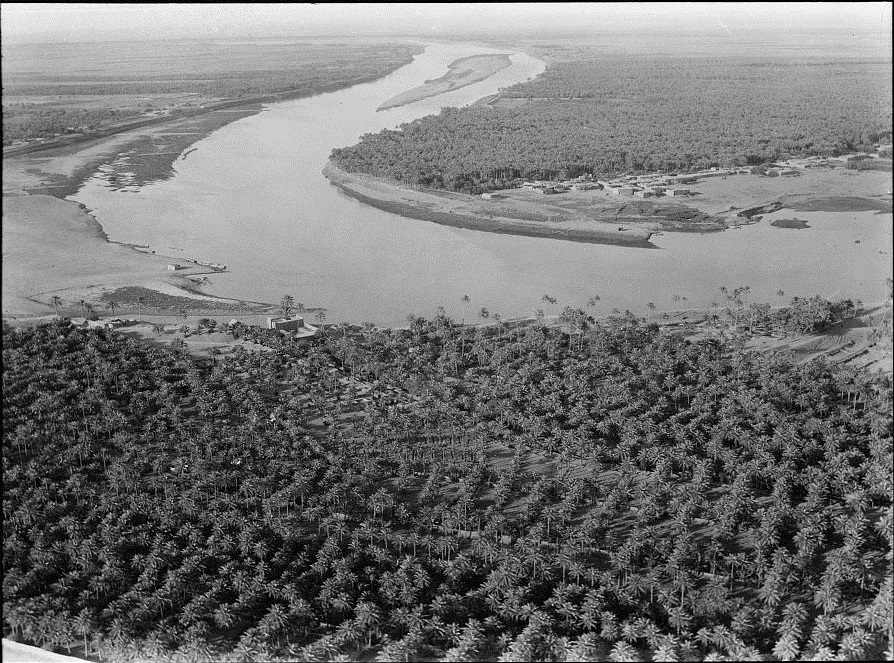 Air route to Baghdad via Amman and the desert. Tigris River. Groves of countless palm trees fringing the river's banks, courtesy of the Library of Congress

Although this summer’s story is new, the pattern is familiar: consumers, in their demand for commodities, can unwittingly fuel coercive labor conditions on the other side of the globe. It is a pattern as familiar now as a century ago, when global demand for two different commodities—one a luxury good, the other a cash crop—helped to sustain slavery in the Arabian (Persian) Gulf. Western consumers demanded Arabian pearls and dates, products that depended on slave labor. Ironically, some of the same countries that called most vocally for an end to slavery happily consumed commodities produced by slaves.

The Arabian Peninsula has the unfortunate distinction of being among the last regions in the world to abolish slavery. In some Gulf countries formal abolition was not declared until the 1960s and 70s. It is widely known that a large-scale slave trade to eastern Arabia from East Africa surged in the second half of the nineteenth century and persisted into the early twentieth century, forcibly moving tens of thousands of African captives to the countries of the Gulf. By the turn of the twentieth century, African slaves, liberated slaves, and their descendants accounted for nearly a fifth of the population of coastal eastern Arabia between Muscat and Kuwait.

But an often-overlooked dimension of this story is the fact that many of eastern Arabia’s slaves labored to produce export commodities that were in high demand in Western countries. The Arabian (Persian) Gulf was the world’s leading producer of pearls and dates in the late nineteenth century and early twentieth century. But labor shortages drove demand for slaves who could labor alongside local workers to expand production. By some estimates, between a quarter and half of Gulf pearl divers were African slaves or their descendants. Likewise, in some of the greatest date producing centers of eastern Arabia thousands of enslaved Africans worked to irrigate, pollinate, and harvest date crops. Dates and pearls were the Gulf’s leading exports and were therefore vital to the region’s economy, but both industries relied heavily on enslaved African labor.

Both pearls and dates found high demand in the United States and Europe. The United States began importing dates from Muscat (Oman) in the early nineteenth century. American ships from Salem, Boston, and New York would sail annually to Muscat to procure dates and Mokha (Yemen) to get coffee, often also stopping at Zanzibar to load ivory and spices. By the mid-nineteenth century, dates had become an American tradition at Thanksgiving and Christmas and were among the most popular treats at American grocers. Soon, “golden” dates from Basra and Baghdad surpassed Muscat dates in popularity and fueled a further boom in American demand. Annual imports of dates to the United States grew from an average of 10 to 20 million pounds between 1893 and 1903 to nearly 79 million pounds in 1925, with the majority coming from Iraq.

Around the same time, pearl fashion experienced a revival in the United States and Europe. Royalty, aristocrats, and nouveaux riches sought to distinguish themselves by wearing pearl necklaces.  Queen Victoria in England and Empress Eugénie in France were joined by actresses like Sarah Bernhardt and professional beauties like Lillie Langtry as trendsetters for women’s fashion, and all were regularly pictured wearing a pearl necklace. Jewelers on New York’s Fifth Avenue sold pearls to the Vanderbilts, Morgans, Carnegies, and other multimillionaires while Paris made new millionaires of its own out of master jewel dealers like “pearl king” Leonard Rosenthal. Prior to the marketing of Mikimoto’s cultured pearls (c.1913), these necklaces were made of natural pearls, and the Gulf produced more pearls by value than all other parts of the world combined.  At the peak of the industry (c.1915) an estimated 64,000 men were engaged in the Gulf’s annual pearl dive. Many of these divers were enslaved Africans and were highly prized before the date and pearl industries collapsed simultaneously in the 1930s.

The date and pearl industries never accounted for all of the demand for slave labor in the Gulf, but demand from these industries was significant, and their success was contingent on slave labor.  Most early twentieth-century consumers did not think much about the conditions of laborers on the other side of the globe who produced the commodities they consumed. Ian Urbina’s investigation last month reveals how, even in the hyper-connected twenty first century, consumers can still unwittingly support coercive labor conditions in far off places through their patterns of consumption. Last century’s struggle with the ramifications of interconnected global markets may still have something to teach us today.

Matthew S. Hopper is associate professor in the history department at California Polytechnic State University. He is the author of Slaves of One Master. 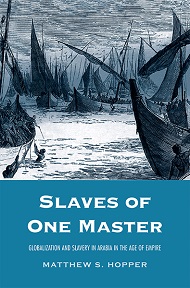