Art conservation offers a fascinating overlap between the worlds of art and science; conservators examine works of art using tools and methods such as microscopy, X-radiography, X-ray fluorescence, and infrared reflectography, and their insight informs decisions about how to preserve, clean, store, transport, and display the works.  Here, Ian McClure, the Susan Morse Hilles Chief Conservator at the Yale University Art Gallery, shares some thoughts about the recent conservation efforts surrounding a painting titled The Education of the Virgin.

Many old master paintings are unsigned and bear no date, complicating the issue of attribution. On occasion, a suggested attribution becomes universally accepted when a painting’s provenance is traced back through successive owners to a point where a close connection to the artist is made. Clues might also survive in the form of inscriptions, owners’ seals, auction stamps, and old inventory numbers from past collections. Contemporary documents, letters, or travel journals might make references to works. But what happens when none of these clues can be found? Curators at the Yale University Art Gallery faced exactly this sort of dilemma surrounding The Education of the Virgin, a painting in the Gallery’s collection. Research, examination, and analysis during conservation treatment and the painting’s subsequent display in two major exhibitions in Seville and Paris have strengthened the attribution to Diego Velázquez.

Velázquez (1599–1660) spent the first part of his career in Seville, Spain, as an apprentice to the painter and theorist Francisco Pacheco, who also became his father-in-law. While Velázquez did not remain in Seville for long—he left for Madrid in 1623 to become a painter at the royal court—it was a time of prodigious development of the young artist’s talent. About twenty paintings survive from this Sevillian period. At the later end is The Waterseller of Seville (1618–22, Apsley House, London), painted for the artist’s patron Juan Fonseca, who oversaw his move to Madrid and secured his position in the royal court. The painting is a tour-de-force for a young artist, with skilled rendering of surface textures—glass, earthenware, wool—and of old and young faces; however, the exact meaning of the painting remains elusive. Yale’s Education of the Virgin, on the other hand, must be placed right at the beginning of the Sevillian period, perhaps Velázquez’s first commission, executed shortly after ending his apprenticeship, when he was about seventeen or eighteen years old. While parts of the painting, such as the still-life elements and the cat and dog, are beautifully painted, the figures are awkwardly placed in relation to each other and Saint Joachim is shoehorned into the left side of the composition.

From the very beginning of Velázquez’s career, he was celebrated for painting bodegones (still lifes). His rendering of the surfaces of earthenware jugs and bowls and other kitchen utensils in Old Lady Frying Eggs (1618, National Gallery of Scotland, Edinburgh) is extraordinary, but the placing of figures and the rendering of space is awkward. Only later, when he lived in Madrid and was able to see great paintings by Titian in the royal collections, did his rendering of space and figure placement reach the heights of Las Hilanderas (1657, Museo del Prado, Madrid) and Las Meninas (1656, Museo del Prado, Madrid).

John Marciari, in his essay for the book The Young Velázquez: “The Education of the Virgin” Restored, explains how he came to the realization that The Education of the Virgin might be a very early work by Velázquez through study of specific features of the painting, as well as knowledge of contemporary works by other artists and the close relation to the 1612 painting of the same subject by Juan de Roelas (Museo de Bellas Artes de Sevilla). Marciari’s attribution has been questioned, however. Doubters wonder if the painting is good enough to be by Velázquez, and whether the subject matter is one that Velázquez would have painted. The painting has been damaged by harsh cleaning, probably in the mid-nineteenth century when the painting was relined—most likely in England, judging from the design of the stretcher that supports the canvas. The areas of abrasion and loss made it difficult to see past the damage and appreciate the quality of what survives. Rich impasto, visible in other works by Velázquez such as The Adoration of the Magi (1619, Museo del Prado, Madrid), has been crushed, markedly reducing the impact of the brushwork. Photographs that Marciari sent to colleagues, seeking their opinions, tended to emphasize the damage. Only when standing in front of the painting could its strong presence be perceived.

An X-ray of the painting revealed that the artist made a number of changes to the composition, suggesting that he experienced difficulties arranging the subject, as might be expected of a young artist struggling with a complex image. Significantly, the objects on the table, almonds and sweetmeats, are virtually the same as those that appear in the Roelas painting. The X-ray image, however, revealed that the artist first painted something else, possibly a crumpled cloth, although it is difficult to interpret. Perhaps the client wanted the painting to be an exact and “naturalistic” response to the Roelas work and instructed the painter to be more faithful. As a young artist, newly independent, Velázquez would probably have been in no position to argue.

Marciari’s interest in The Education of the Virgin prompted additional technical examination—the X-ray was followed by an infrared image. These initial examinations confirmed that the painting was unlikely to be a copy or a pastiche, in which few changes during the painting process would be expected. Further research, including careful examination of the painting’s surface with a microscope and an analysis of minute paint fragments taken from areas of existing damage, confirmed that the painting could be from Seville in the early seventeenth century. Some aspects of the technique exhibited in the painting have been closely associated with other early works by Velázquez: the use of fine lines to mark parts of the composition, and the use of mixtures of blue and yellow in lieu of green paint. While this might be considered conclusive evidence for the painting’s authorship, it must be remembered that other works by Velázquez from his Seville period have yet to be examined, and works by his contemporaries have been subject to comparatively little technical examination.

The technical examination of Yale’s painting can only show there is nothing to prevent the painting from being by Velázquez. It cannot, however, prove that the painting is by him. Until some documentary evidence emerges linking the work directly to the artist, the attribution of this undeniably great painting will always be a matter of discussion, although weighted in favor of the present attribution. 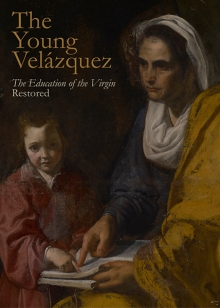