Throughout the week, we’re celebrating the tenth anniversary of the Little History series. We’re kicking things off with the latest book, A Little History of the United States, which comes out tomorrow. The author, James West Davidson, sat down with us to preview his take on American history.

Yale University Press: Who are the readers of this book and how do you hope to inspire them?

James West Davidson: This is a book for adults masquerading as one for young people. That’s said tongue-in-cheek, but still . . . When I was an eighth grader, the last thing I wanted to endure was high-minded civics lectures. So my first rule here is, treat younger readers as adults. Keep the story engaging and fast-paced, but also honest and about the big picture. Because there are also vast numbers of adults out there who had the American history beaten out of them in dull social studies classes. Those adults deserve better. And too few historians write for them.

YUP: Which key events in American history shaped the nation most powerfully?

JWD: I’d turn the question around. How do a thousand smaller pieces of history come together to shape key events? Look at the Civil War. If the purpose of a democratic republic is to resolve conflicts peacefully, then the Civil War is the republic’s biggest failure. How did that happen? That’s a two-hundred-year tale at least, which takes a lot of the first half of the book to explain. It’s perhaps the strangest story in our history, of how the ideas of equality and liberty were growing and spreading at the very same time that inequality and slavery were becoming more deeply entrenched in American society.

YUP: Of the countless individuals in American history, do you have a favorite?

JWD: Many favorites, not one. But here’s a cliché: Washington. You know—the bland, blank face on the dollar bill? I found myself liking him more and more as I got to know him. In the depths of the Revolution, begging his bedraggled soldiers “in the most affectionate manner” to reenlist. Grinning, shouting and waving a handkerchief at the prospect of trapping the British at Yorktown. So embarrassed by the honors heaped upon him on the way to his first inauguration, he rose early and snuck out of town before his escort could arrive. Somber toward the end of his life at the thought that “nothing but the rooting out of slavery can perpetuate the existence of our union” [130]. And on that, he was right.

YUP: Do you deal with any American villains?

JWD: To use the label risks blinding yourself to the all too human complexity of the past. American history is full of characters who are ruthless, egotistical, or unscrupulous, as well as those who are loving, resolute, funny, eccentric and even downright strange. Who would ever name his son Legal Tender? Jacob Coxey did; and yet Coxey spoke eloquently for ordinary Americans when he led the first nationwide march on Washington during the hard times of 1894. American history is filled with the good, the bad and the ugly, but those traits seldom manifest in primary colors. Their shades are usually intermixed.

YUP: In our own contentious times, are there lessons from American history that might lead us toward the rediscovery of common goals and interests?

JWD: I think so. How do we come together? How do we live up to the nation’s motto, E pluribus unum? Columbus spoke of a golden age when everyone would live in peace. The Puritans thought their colony should stand like a “city upon a hill,” an example the world would follow. Noble dreams, but at the Constitutional Convention, James Madison recognized that human nature would always thwart such hopes. People inevitably come together bringing diverse heritages and conflicting interests. The American republic is exceptional not because we all think alike but because we have a political system that unites us by resolving differences. Calls for purity are misguided—whether that purity is supposedly racial, religious or cultural. Better to appreciate, with the poet Walt Whitman, that “Here is not merely a nation, but a teeming nation of nations.”

James West Davidson, a widely respected historian, has written on American history and the detective work that goes into it, as well as books about the outdoors. His textbooks for the middle grades, high school and college have been read by millions of students. He is also coauthor of Great Heart, cited by the National Geographic Society as one of the 100 greatest adventure books of all time. He lives in Rhinebeck, NY. 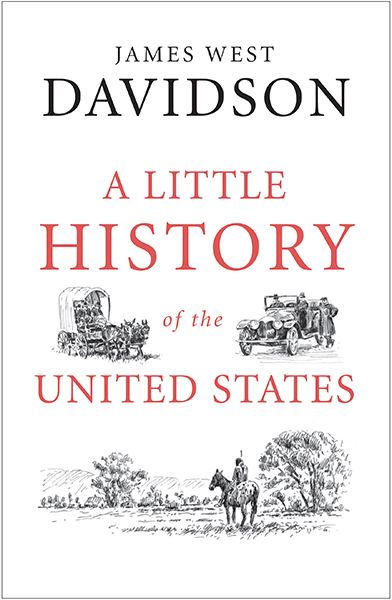 Featured Image: The Birth of Old Glory by Edward Percy Moran via Wikimedia Commons in the public domain.