Absurdist literature is notoriously difficult to read. Take, for example, Kafka’s short story, “The Metamorphosis,” in which the main character turns into a giant cockroach. Critics have produced countless different theories to explain the significance of Gregor Samsa’s transformation—and this diversity of interpretive meanings, John Sutherland proposes in A Little History of Literature, is the paradoxical result of a type of literature that takes the meaninglessness of life as its premise. In the following excerpt, Sutherland introduces Kafka’s literary mission to assert the pointlessness of literature, and discusses his influence on another writer who grappled constantly with the problems of existentialism and absurdism, Albert Camus. Check out the rest of our Little Histories here.

If you made a list of the most gripping opening lines in literature, the following would surely make it into the top ten:

As Gregor Samsa awoke one morning from uneasy dreams he found himself transformed in his bed into a gigantic insect.

It is from a short story, “The Metamorphosis,” by Franz Kafka (1883–1924). It’s probable that Kafka did not much care whether we read this sentence or anything that he wrote. He instructed his friend and executor Max Brod to burn his literary remains “preferably unread” after his death—he died prematurely, aged forty, from tuberculosis. Brod, thankfully, defied the instruction. Kafka speaks to us despite Kafka.

The human condition, for Kafka, is well beyond tragic or depressed. It is “absurd.” He believed that the whole human race was the product of one of “God’s bad days.” There is no “meaning” to make sense of our lives. Paradoxically that meaninglessness allows us to read into Kafka’s novels such as The Trial (which is about a legal “process” which doesn’t process anything), or his stories like “The Metamorphosis,” whatever meanings we please. For example, critics have viewed Gregor Samsa’s transformation into a cockroach as an allegory of anti-Semitism, a grim forecast of the criminal extermination of a supposedly “verminous” race. (Kafka was Jewish, and just a little older than Adolf Hitler.) Writers often foresee such things coming before other people do. “The Metamorphosis,” published in 1915, has also been seen as foreshadowing the collapse of the Austro-Hungarian Empire in 1918, after the First World War. Kafka and his fellow citizens in Bohemia, centered in Prague, had lived under that vast empire. They woke up suddenly to find their identities had vanished. Others have read the story in terms of Kafka’s problematic relationship with his father, a coarse-grained businessman. Whenever Franz nervously gave his father one of his works, it would be returned unread. His father despised his son.

Albert Camus’s opening proposition in his best-known essay, “The Myth of Sisyphus,” is that “There is but one truly serious philosophical problem and that is suicide.” It echoes Kafka’s bleak aphorism: “A first sign of the beginning of understanding is the wish to die.” Why not, when life is pointless? Camus’s essay pictures the human condition in the mythical figure Sisyphus, doomed for eternity to roll a rock up a hill, only for it to fall down again. Pointless. Only two responses are feasible in the face of man’s Sisyphean fate: suicide or rebellion. Camus appended a long note—”Hope and the Absurd in the Works of Franz Kafka”—to his Sisyphus essay, commemorating the writer to whose influence he was indebted.

Kafka’s influence is evident in Camus’s fictional masterpiece The Outsider, written and published under Nazi occupation censorship. The action is set in Algiers, nominally part of Metropolitan France. The narrative opens bleakly: “Mother died today. Or maybe yesterday: I can’t be sure.” Nor does the French Algerian hero, Meursault, care. He cares about nothing. He has, he confides, “lost the habit of noting his feelings.” For no particular reason, he shoots an Arab. His only explanation, not that he troubles to come up with explanations, even to save his life, is that it was very hot that day. He goes to the guillotine, not even caring about that. He hopes the crowd watching the execution will jeer.

It was Camus’s comrade in philosophy, Jean-Paul Sartre, who perceived, most clearly, what drastic things Kafka had done to fiction’s rule book. Generically, as Sartre wrote in a digression in his novel Nausea (1938), the novel presumes to makes sense, fully aware that life doesn’t make sense. This “bad faith” is its “secret power.” Novels, said Sartre, are “machines that secrete spurious meaning into the world.” They are necessary, but intrinsically dishonest. What else do we have in life other than the “spurious meanings” we invent?

—Excerpt from A Little History of Literature, John Sutherland

John Sutherland, Lord Northcliffe Professor Emeritus of Modern English Literature, University College London, has taught students at every level and is the author or editor of more than 20 books. He lives in London. 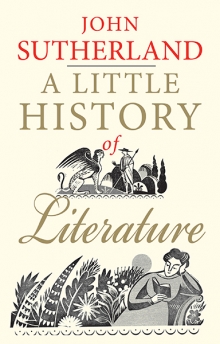