In the House of Representatives, minority parties are neglected parties. People tend to assume they are powerless, doing little more than making symbolic gestures and whining about how badly the majority party governs, and are therefore unimportant.

But in fact legislators from the House minority party have repeatedly influenced politics and policy. The closure of hundreds of military bases in the 1980s, 1990s, and 2000s came about after a member of the minority party, Rep. Dick Armey (R-TX), pushed for the creation of the Base Realignment and Closure process.  Medicare-subsidized health care was established at Department of Defense facilities in part because of the tenacious efforts of Mississippi Rep. Gene Taylor, a minority party Democrat. When President Barack Obama began describing his administration’s energy policy as “all of the above,” he was lifting directly from the rhetorical playbook of the House Republican minority, who had used the same phrase to describe their own energy agenda.

House minority leader Nancy Pelosi and her fellow Democrats currently have perhaps the most political leverage of any minority party in the House in years, if not decades. There are four main reasons why – reasons which reveal the key conditions under which the minority can exercise maximum influence in the House of Representatives.

First, Congress faces several impending deadlines to enact major, “must-pass” bills. The first, and most urgent, comes on September 30, when the fiscal year ends and appropriations for the federal government must be enacted; otherwise, all of its non-essential operations will cease. But there are other deadlines looming too:  transportation authorization legislation is needed by the end of October, lest hundreds of federally-funded transportation projects come to halt or never break ground; and the debt limit must be raised by early November—never a popular vote in Congress—before a default on the U.S. Treasury.  The point is that, rather than the majority party setting the legislative agenda, the agenda is largely being imposed on the party, which limits its flexibility to decide what its members may vote on.

Second, the majority party is divided, at least on government appropriations. The 40-plus members of the conservative Freedom Caucus and a number of other conservative Republicans have declared that they will not vote for any spending bill that has funding for Planned Parenthood. That is more than enough to deny Speaker John Boehner the majority he would need to pass a continuing resolution to fund the government without votes from minority party Democrats.

Third, the minority party is more unified than the majority. Most importantly, it seems to be united behind their party leaders’ strategy of refusing to support appropriations bills unless Republicans agree to negotiate an increase in non-military as well as military spending, even if it means the government runs out of money at the end of this month. That means Boehner cannot simply borrow some Democratic votes to pass a continuing resolution to fund the government; he instead must negotiate with Pelosi, and that may mean making some significant concessions to the minority party.

Finally, Democrats have a “lame duck” ally in the White House while Republicans have a majority in the Senate. The former means that the president has little to lose by opposing legislation that he (and the minority party) dislikes, and if just 146 House Democrats vote to uphold the veto, it can’t be overridden.  (This was one of the reasons House Republicans redid their strategy for dealing with the Iran nuclear agreement, going with an elaborate “triple-vote” tactic that, while largely symbolic, they hoped would embarrass Democrats into voting against the deal.) The latter means that it is more likely to be Senate Republicans, not Democrats, who get blamed for bad outcomes like a government shutdown. So Pelosi feels no pressure to protect the party’s majority in the Senate (as she did two years ago, during the last shutdown) and has more leeway in pushing for tough demands in negotiations with the G.O.P.

Even with all four of these conditions in place, there is no guarantee that House Democrats will triumph over the majority party in future policy battles. Some conservative Republicans are so unhappy with Boehner that they’d be willing to see him removed, as Rep. Mark Meadows of South Carolina indicated by his recent  resolution to declare the Speaker’s chair vacant. So Boehner has an incentive to follow the legislative demands of his party’s conservative wing, not Democrats. Furthermore, if must-pass legislation isn’t enacted—if, say, the government is forced to shut down for a lengthy period of time—House Democrats may feel pressure from constituents and White House to surrender to Republicans and pass needed legislation regardless of its content.  In fact, at least one long-time budget expert doesn’t think congressional Democrats will matter in negotiations over government funding at all.

Nonetheless, at the moment House Democrats do have far more potential leverage over the majority party than usual. The next few weeks and months will reveal whether they are willing and able to use it.

Matthew N. Green is an associate professor of politics at the Catholic University of America in Washington, D.C. 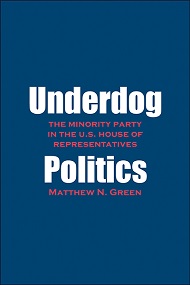