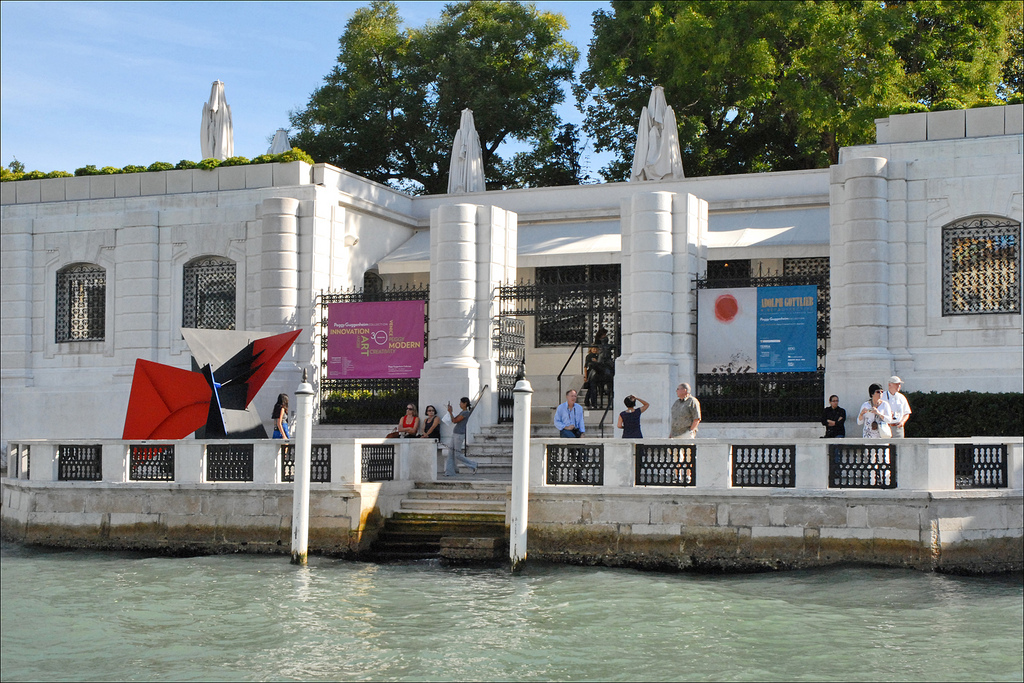 Image above is a photograph by Jean-Pierre Dalbera of the Peggy Guggenheim Museum in Venice, Italy; used with permission.

An eccentric heiress with an all-consuming passion for avant-garde art and artists, Peggy Guggenheim (1898-1979) just happened to change the course of 20th-century art during her tumultuous lifetime. She befriended, sometimes bedded, and often financially supported some of the most important artists and writers of her day. She established two premier galleries for contemporary art in the late 1930s and 1940s, first in London, and later in New York.

Along the way, she assembled one of the finest collections of 20th century art to be found anywhere, rivaling that of her uncle, Solomon R. Guggenheim, whose collection is housed in his namesake museum in New York. Today, The Peggy Guggenheim Collection is permanently on view in her former Venice residence, the Palazzo Venier dei Leoni on the Grand Canal. Filled with masterpieces by Picasso, Braque, Mondrian, Duchamp, Ernst, Dalí, Jackson Pollock, Grace Hartigan, Francis Bacon, and many others, the museum is one of Venice’s major attractions. While she had a discerning eye for prime examples by the pantheon of modernist greats, Guggenheim did not shy away from acquiring works by rather offbeat figures, such as the Italian sculptors Arnaldo Pomodoro and Marino Marini, and British painters Alan Davie and Graham Sutherland, which also grace her 18th-century villa.

On a visit to Venice this summer, I made the pilgrimage to the museum, which featured “Jackson Pollock’s Mural: Energy Made Visible,” a special show on view through November 16. Curated by David Anfam, the traveling exhibition centers on the recently restored Mural (1943), which Guggenheim commissioned Pollock to paint for her Manhattan townhouse. At nearly 9 by 20 feet, it is the largest painting Pollock ever made. With its sensuously undulating lines, rhythmic gestures, and vibrant color, this landmark composition was light-years ahead of its time, and heralds the advent of Abstract Expressionism.

Guggenheim supported Pollock with a monthly stipend, and presented his first solo exhibition at her New York gallery, Art of This Century, in 1943. The Venice show thereby underscores her formidable influence on what became known as the New York School. Much of the art production of the avant-garde in the subsequent two decades owes a great deal to Guggenheim’s efforts and advocacy.

Guggenheim was an enigmatic personality, a proto-feminist, who had a terror of living alone, and too often allowed the men in her life to make important decisions for her. She made attempts to explain her actions and commandeer her own legend by publishing her memoirs in a number of versions over the years, beginning with Out of This Century, in 1946, and later expanded and rereleased as Out of This Century: Confessions of an Art Addict. Each new edition of her juicy, scandal-filled life story caused a stir.

Peggy’s stodgy and privileged upbringing came screeching to a halt when her father, Benjamin Guggenheim, lost his life in the sinking of the Titanic. When she turned 21, she came into a sizable inheritance, mostly from her mother’s side of the family, approximately $35 million in today’s currency. She headed for Europe and settled in Paris, where she quickly became a fixture on the art and poetry scenes in the 1920s and ’30s, attracting a wide range of friends, lovers, and hangers-on among its denizens. While most of them helped themselves to her cash, she took advantage of their talents to further her own intellectual pursuits. James Joyce, Samuel Beckett, André Breton and Djuna Barnes were among her many dependents and confidants.

While her life seemed enviable, she was fraught with demons. She had a great eye for art, but woefully poor judgment regarding men. Her violent marriages to the writer and sculptor Laurence Vail, and later Max Ernst, seemed to be mere interludes in a procession of countless failed love affairs. Coming of age as a Jewish woman during the rise of fascism, and battling low self-esteem, as well enduring physical abuse by alcoholic partners, Guggenheim faced more than her share of challenges.

As World War II approached, she helped many artists and intellectuals flee Europe for America. She also took advantage of the entropic situation to acquire some top-notch works of contemporary art that might be had for a song, and might otherwise have gone up in flames with other works that the Nazis labeled “degenerate art.” During this period, Guggenheim purchased key examples by Picasso, Braque, Kandinsky, Brancusi, Léger, and many others, often in consultation with her friend and advisor Marcel Duchamp. Amidst this chaotic environment, she did her best to raise two children, Sindbad and Pegeen, fathered by Vail, one of her typically abusive husbands.

As extraordinary as her life and contributions to 20th- century art may have been, Guggenheim is often under-recognized or entirely overlooked in the era’s official canon. The situation is slowly changing, however. A well-received feature-length documentary, Peggy Guggenheim: Art Addict, directed by Lisa Immordino-Vreeland, has been making the rounds of film festivals since April. Also last spring, Peggy Guggenheim’s heirs revived litigation against the Solomon R. Guggenheim Foundation, which oversees the Peggy Guggenheim Collection. The litigation aims to preserve her legacy, and the integrity of her vision, countering the foundation’s plans to display the holdings of other collectors on the premises.
In addition to these developments, Peggy Guggenheim: The Shock of the Modern, a new biography by acclaimed novelist Francine Prose, launches this month. Part of Yale University Press’s Jewish Lives series, the book is a spirited account of Guggenheim’s life and times. Recently, I met with Prose to discuss the new book, and her thoughts about Peggy Guggenheim’s larger-than-life persona.

David Ebony: Everyone knows her name, but I think that in some ways Peggy Guggenheim is one of the unsung heroic figures of 20th century art. What attracted you to her story? What inspired you to write about her life and work?

Francine Prose: The idea came out of meetings with Ileene Smith, editor of Yale University Press’s Jewish Lives series. Peggy Guggenheim was among the names that came up. One of the things that appealed to me about her as a subject was that I had just published a novel, Lovers at the Chameleon Club, Paris 1932 [Harper 2014], which has a character loosely based on Peggy—a wealthy art collector in Paris in the 1930s. I wasn’t ready to leave that world yet, the world of the novel. Also, I had recently visited the Peggy Guggenheim Collection in Venice, and thought about her life and work, and how most of her biographers had not done justice to her achievements.

Ebony: She tried to make a case for herself in her own words, in her memoirs.

Prose: Isn’t it a great book?! She expected it to become a classic. I am surprised it’s not generally regarded as one. The way she wrote about her life, the tone of it, kind of wild-child, is so offbeat and interesting. Its style reminds me of certain novels by Jane Bowles; it’s interesting that they were close friends. Guggenheim took her writing seriously, but she got little or no credit as a writer in her lifetime.

Ebony: Peggy was close to many prominent writers of her day, maybe even more than visual artists. She supported Djuna Barnes for a time.

Prose: She was close to James Joyce, and also had an intimate relationship with Samuel Beckett, of course.

Ebony: She had a seemingly endless stream of difficult relationships with men, sometimes almost sadomasochistic. What was the problem?

Prose: One of the things I’ve been thinking about is that there was so much alcohol consumed by these people. It was a kind of alcohol culture of the time. If any one of those people were alive now, and behaved like that, there would be some kind of intervention. Her marriages to Laurence Vail and Max Ernst were filled with alcohol-fueled violence. There is some evidence that Peggy provoked these men into violent behavior. But it is a fact that heavy drinking nearly always brings out the worst in someone’s personality. Later in life, she had a very sweet relationship with the poet Gregory Corso.

Ebony: Was the relationship physical?

Prose: That’s not clear. Probably not. She was quite a bit older than Corso, in her 50s, although she did remain sexually active in her later years.

Ebony: In your book, you offer a very compelling analysis of Peggy’s relationship with her daughter Pegeen Vail. Can you talk a bit about that strange dynamic?

Prose: Pegeen felt that she never really got her mother’s attention. And there was often competition between them for attention from the men in the household over the years. This was certainly the case with Max Ernst. Ernst did a painting in which Pegeen is depicted as an angelic figure, and Peggy a monster. Pegeen became a painter, and quite a good one. There’s a room devoted to her in Venice. The circumstances of Pegeen’s untimely death [in 1967, age 41] are unclear. In doing research for the book, I heard so many contradictory and extreme explanations. Someone told me, “Well, you know she was murdered.” But that’s not certain. It is well known that she had a problem with drugs, and also drank a lot.

Ebony: What would you say is Peggy Guggenheim’s legacy?

Prose: If you go to the Peggy Guggenheim Collection in Venice, there it is. She had foresight, a lot of nerve, and a great deal of courage. She was an extraordinary woman. She was a victim in some way—perhaps victim is not quite the right word; but in her lifetime she had to deal with a lot of sexism, and anti-Semitism. I don’t think she’s exactly underappreciated now, but those issues still surround her and her legacy to some degree.

Francine Prose is a best-selling author and National Book Award finalist based in New York. Among her books are the novels Blue Angel; A Changed Man; and Primitive People; and non-fiction works Caravaggio: Painter of Miracles; and Reading Like a Writer. 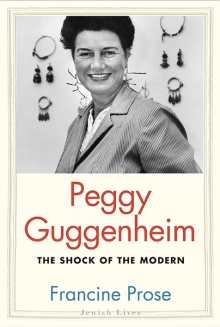