Since 2013 claims have been circulating that ivory is a major source of funding for Al Shabaab in Somalia, and it has even been called the “white gold of jihad.” This is a powerful message—and one that is promoted by some wildlife conservation organisations, representatives in the US Government, and even by UN Secretary General Ban Ki Moon. The claim that has received greatest attention is that ivory may provide up to 40% of Al Shabaab’s funding, which originates in a 2012 report based on undercover research by Nik Kalron of Maisha Consulting and Andrea Crosta of Elephant Action League.  But there are very good reasons to be skeptical of this claim—it has achieved the status of truth merely by repetition rather than by provision of evidence. A recent report by UNEP and INTERPOL states that claim is not credible, and a recent report by the UK’s Royal United Services Institute (RUSI) also offers a comprehensive critique.

So why was it so readily believed and promoted? The answer lies in the intersection between strategic interests and competition between NGOs for funding.

The idea has been presented as a direct threat to US security, and therefore worthy of attention and investment. The link between ivory and terrorism has been explicitly promoted in US Government circles, notably in the cross party International Conservation Caucus. The claim has been further promoted and embedded by some conservation NGOs: “Terror and Ivory” is a central feature of the 96 Elephants campaign by Wildlife Conservation Society; and it has been actively promoted by the Conservation International via the film Direct Connection which repeatedly states that wildlife trafficking is a direct threat to US economic and strategic interests. This approach has been endorsed by celebrities, and is the subject of a short animated film Last Days of Ivory by Oscar-winning film director Kathryn Bigelow. The Clinton Foundation is also in on the action—teaming up with Wildlife Conservation Society, African Wildlife Foundation, Conservation International, International Fund for Animal Welfare, and World Wildlife Fund-US,  with a pledge to raise $80 million to tackle wildlife trafficking as a threat to US security.

The EAL report on ivory and Al Shabaab was ignored when it was initially posted on their website in 2012, but gained greater international attention following the Westgate Mall killings in Nairobi in September 2013. After the attacks some conservation NGOs started to spread the message that ivory was funding terrorist networks. This was because conservation NGOs exist in a highly competitive environment, and talking up the link to terrorism seemed like a potentially lucrative strategy. But the potential link between terrorism and ivory also suited the strategic interests of governments trying to cope with increases in poaching and violent attacks by militias. This was especially the case for Kenya. It also suited US strategic interests in the region, and presenting US support as wildlife conservation rather than as part of a wider war on terror had the capacity to make it more palatable to domestic interests.

The focus on the link between ivory and terrorism has distracted from understanding the drivers of rises in poaching across Sub-Saharan Africa, and it did not help develop effective policies to tackle poaching or Al Shabaab. The ivory-terrorism link provided a rationale for those arguing for a more militarized approach to anti-poaching, including the use of shoot to kill strategies.  Forceful approaches in conservation can (and do) implicate conservation NGOs in human rights abuses against local communities who may or may not be involved in illegal activity, and so it can alienate the very communities that live with wildlife. As a result less attention was paid to longer term approaches that might be more effective: demand reduction strategies in key ivory markets, rural development programs that tackle poverty and lack of opportunities, and provision of alternative livelihoods. The ivory-terrorism link is a powerful, but inaccurate, message which distracts from focusing on the important challenges in wildlife conservation and in global security.

Rosaleen Duffy is professor of political ecology of development at the University of London. 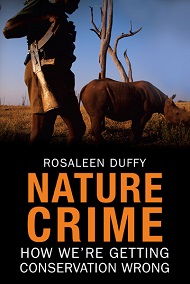