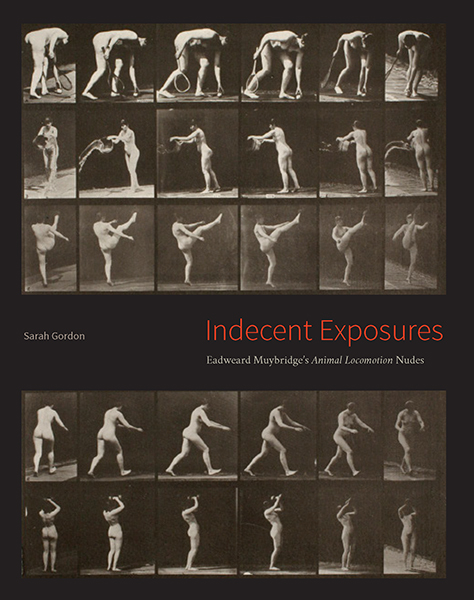 In 1878, photographer Eadweard Muybridge stunned audiences in the United States and abroad when he quickened the shutter of his camera to freeze the motion of a trotting horse. Nine years later, Muybridge’s photographic motion studies culminated in the publication of Animal Locomotion: An Electro-Photographic Investigation of Consecutive Phases of Animal Movements, 1872-1885. In eleven volumes, produced under the auspices of the University of Pennsylvania, the publication included 781 plates of serial photographs of humans and animals in motion. Most notably, 340 plates featured nude men and women performing both typical and unusual daily activities. Nude men swung bats, stood on their hands, and played leapfrog; nude women swept the floor, bent over trestles, and poured water on one another.

These strange and daring pictures revealed aspects of the nude body undetectable to the human eye, only exposed by the instantaneous photograph. Despite their apparent lack of propriety, the pictures reached a wide audience and garnered much praise. While Muybridge’s fast shutters and serial technique have endured as the most salient feature of his work, it was the nudes themselves that both endangered the publication and launched it to the heights of success. The Animal Locomotion nudes played a central role in some of the most crucial artistic and scientific advancements of their time, offering innovative perspectives to artists while also advancing specialized scientific and medical research and representing cutting edge evolutionary theory.

“It is astonishing how ignorant artists are on the subject [of human and animal movement],” declared Muybridge in 1885. He intended his photographs to act as a corrective to the deficiencies of artists since ancient times. Accordingly, some of the Animal Locomotion postures resemble John of Bologna’s Mercury, Polykleitos’ Spear Bearer and Myron’s Discobolus. In other instances, Muybridge’s subjects perform the Venus Pudica pose and re-enact ancient Roman or Greek vase paintings. In addition to offering new views on ancient artistic tropes, Muybridge chose models whose physiques and activities would be attractive to contemporary artists painting and sculpting in the Realist style then reaching its apex.

Beyond revealing past artistic errors and serving as ersatz models, Muybridge’s technically innovative photographs tested the hotly debated border between what the artist sees and what he or she depicts. Some artists and critics recoiled against Muybridge’s photographs, arguing that artists should represent only what is available to the human eye and mind. Others, like Philadelphia painter Thomas Eakins, eagerly took full advantage of the scientific and mechanical modes of investigation at their disposal, including the newly quickened camera shutter. Muybridge’s photographs thus intensified the decades-old debate regarding photography’s relationship to art and deepened the divide between modern artists relying on empiricism and subjective experience and those striving for objectivity by exploring innovative technologies.

Muybridge’s Animal Locomotion photographs also entered directly into the arena of scientific investigation. Several professors of science sat on the Muybridge Commission, the oversight committee at the University of Pennsylvania. These faculty members included human and veterinary anatomists, a physicist, a physiologist, and two engineers. Their goals for the project diverged from Muybridge’s, as these scientists and medical doctors aimed to increase their understanding of muscle movement in humans and animals in order to advance their own research. Their concerns lay in neurological disorders, comparative anatomy, and the increased efficiency of human and animal bodies. Their presence on the committee accounts for the pictures of abnormal locomotion—the movement of individuals suffering from illness or injury—that appear at the end of the volumes. For them, as opposed to some of their artistic colleagues, the purported objectivity of Muybridge’s camera was something to fully embrace.

Additionally, Muybridge’s Animal Locomotion nudes drew on and contributed to contemporary discussions of evolutionary theory. Published in the wake of Darwin’s Descent of Man, the arrangement of photographs within the volumes demonstrated the Muybridge Commission members’ support for Darwinism. The volumes begin with nude, athletic males and then proceed to nude females before introducing abnormal human locomotion and, finally, domestic and wild animals. The continuity of the species follows Darwinian logic. Also, the arrangement of human subjects within the volumes and evidence of the treatment of models in the studio indicate a hierarchy based on gender and physical ability. This distinction picks up on secondary strains of Darwinism that view female and pathological bodies as less evolved than and posing a threat to healthy males. The pictures thus represent both the optimism and anxiety of cutting-edge evolutionary theory.

Muybridge’s Animal Locomotion nudes appeared not just at the intersection of art and science, but at the juncture of several crucial advancements of the modern era, including modern art, medical science, and evolutionary theory. Beyond the innovative camera technology used to produce them, Muybridge’s nudes themselves proved tremendously influential, initiating the unflinching photographic investigation of the human body that continues today.

Sarah Gordon is a lecturer, curator, and art consultant based in Washington, D.C.