Did candles on the Christmas tree start the blaze that destroyed the Castle Warthausen in Upper Swabia in 1621? Probably not, for many indications suggest that decorating trees with candles did not become widespread until the following century. Did Martin Luther, enchanted by the stars in the sky on Christmas Eve, light the first candle on a tree? That too is probably but a legend. Elizabeth Charlotte, Princess Palatinate, wrote in 1708 of ‘‘little candles’’ affixed to a boxwood branch: ‘‘It looks adorable.’’ Royal decrees later banned the use of candles in order to reduce the risk of fires. Goethe saw a Christmas tree with candles in 1765 in Leipzig and is said to have introduced the fashion to the Weimar court a decade later. In 1821, on the occasion of the Christmas celebration of Karl August, Grand Duke of Saxe-Weimar-Eisenach, Goethe wrote:

From head to toe in sweets,

Swaying in the light.

Such a festival to us is given;

The beauty of the gifts adored,

With wonder gaze we up and down,

Here and there and once again.

In a way the lights on the tree are an apt symbol of the birth of Christ, who was himself described as the ‘‘light in the darkness.’’ Before the introduction of electricity, light was treasured. A tree decked with candles created a completely new atmosphere; its radiance was much greater in the darkness of the past, before neon lights and lighting of all sorts on the street and in our homes dimmed its comparative luster. The characteristic scent of beeswax candles also contributed to the atmosphere, but they were very expensive. More common were mass produced tallow candles and oil lamps. One could fill one half of a nutshell with a little oil, dip a wick into it, and fasten it to the branch with string or wooden clips. Small glass lamps were also filled with oil; a small pin connected to the lamp could then be affixed to the branch of the tree. These lamps, however, produced a lot of soot. Once beeswax candles were replaced by stearin, made since 1818 of plant and animal fats, and paraffin, processed from crude oil after 1830, candles became affordable to the broader population.

Fastening the candles to the tree required great skill and care. Before the invention of special candleholders with clips, made of bronzed and painted tin, the tree trimmer had to make do with pins. After cutting off the head of the pin with a pair of pliers, one heated the dull end and inserted it into the bottom of the candle. Then the candle could be pinned onto a branch. But this sounds easier than it actually was, and it was not uncommon for a tree to go up in flames if a single candle snapped off its branch. The metal candleholder clips—described in a brochure as ‘‘candleholders to clip on or balance on the branches, white, gold, and various colors, starting at just ten cents’’—were often made to resemble butterflies, angels, and birds. These candleholders didn’t eliminate the risks, but they did attach the candles to the tree more securely and safely. A small hanging counterweight, in the form of a tree or an icicle, ensured that the holder remained balanced on the branch. Other candleholders were screwed directly into the trunk. One variation involved lights that could be hung like a small lantern, with red or green translucent windows. The lighting of the candles became a little performance in itself. Traditionally, an even number of candles was always lit, starting at the top. This was done with a tube-like wax candle, up to three feet long, that could be extended to help both light the candles and extinguish them (this time from the bottom up). We have no reliable fire statistics from the time, but from time to time a Christmas tree fire made news when a person was injured or a house burned down.

The search for safer tree illumination was ongoing. In the United States in the 1870s one inventor created a gaslit cast-iron Christmas tree with simulated branches that featured little openings where the gas could be ignited. ‘‘The Improved German Christmas Tree,’’ as it was called, was exported to Germany as well. It was distinguished not only by its little blue flames but also by its clearly audible hissing: ‘‘The gas flows through the hollow branches and, where a candle once stood, there now flickers a gas lamp from the narrow slit.’’ One can only assume that this mechanical wonder led to its share of accidents. At any rate, this temporary solution failed to establish itself.

Around 1885 gas lamps were replaced by the electric lights we know today. Some claim that Berlin was home to the first electrically illuminated tree. The wires—wrapped in green—that connected the lights were hidden in the tree as well as possible in order to maintain the illusion that they were ‘‘real’’ candles. And the little lights took the forms of glass fruits, Santa Clauses, suns, and moons, all lit from inside. East Asian companies initially thrived in this market.

But did the electric lights create the same atmosphere as the real candles? Some traditionalists remained skeptics, but many used the new lights lest they be seen as ‘‘old fashioned.’’ In the end there was one overwhelming argument: the risk was gone.

Bernd Brunner is a freelance writer who often explores the intersection of cultural history and the history of science in his writings. He divides his time between Istanbul, Turkey, and Berlin, Germany. 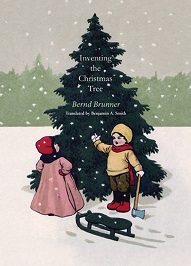 From Inventing the Christmas Tree by Bernd Brunner, translated by Benjamin A. Smith, published by Yale University Press in 2012. Reprinted with permission.