Though it might sound very unappetizing, many animals eat their own feces (or poop). For example, rabbits do it to help them to break down grasses, which are difficut to digest. Unlike cows and their relatives that chew a regurgitated “cud” of grass, rabbits have to take a longer path. They undergo primary digestion, then re-ingest their feces into a specialized stomach compartment where microbes can really extract the nutrients out of the tough fibers. Rabbits and many other animals also imbibe their mother’s fecal pellets, and this behavior has been described as adaptive for the babies, because it is the way they obtain their core gut microbiome. If baby animals are prevented from eating their mothers’ poo, their digestive tract microbiomes are disrupted, which most assuredly has an effect on their ability to digest food.

People have also sometimes taken to this behavior as well. For millennia, the Chinese used dried human feces to treat abdominal diseases, believing that it had medicinal properties. In the recent years this form of traditional medicine resurfaced as a “poo tea” craze, where a slurry of warm pig and goat poop is ingested as a folk remedy for ailments ranging from skin problems to cancer.  If goat or sheep poop is beneficial, then wouldn’t an exotic animal be even more powerful? This was the logic of a wildlife biologist who began selling panda poo tea, which fetches prices of more than $30,000 per pound. He reasoned that since pandas are poor digesters of bamboo and have left many nutrients including large amounts of fiber behind, it should be healthy.  (Psyllium fiber supplements suddenly sound more benign . . . and certainly cheaper!)

There is another strange case of humans ingesting the feces of other animals for their health though.  When the Nazi army invaded North Africa in 1941, the German tank drivers thought it was good luck to run over piles of camel dung. The Allies started to make fake camel dung piles and connect them to explosives that would detonate when run over by any luck-seeking tank driver. The deceit was so well planned that the Allies even put tire track marks in their fake dung piles to trick the tank drivers into plowing over them.

But, camel dung in its true form would hold a life-saving secret. Soldiers were suffering greatly from dysentery and the Nazi medical corps was brought in to attempt to alleviate the outbreaks. Early on, the local nomads were thought to hold a key to the solution, because they rarely suffered from dysentery. In fact, when an outbreak of dysentery occurred, or even when slight diarrhea was experienced, the nomads would diligently follow their camels around. When a camel defecated, the nomad would quickly scoop up the dung and ingest some while it was still steaming.  After close scrutiny of the dung, the corps discovered that the dung was loaded with the bacterium Bacillus subtilis.  This species is in the same genus as a terribly pathogenic species, Bacillus anthracis, which causes anthrax, an often lethal respiratory disease. Bacillus subtilis, however, has since become one of those bacterial species considered “good” for humans.

What is it about B. subtilis that would make Arab nomads ingest camel dung? This species is a voracious eater of other microbes, including the ones that were causing dysentery. By ingesting the camel dung, the nomads were essentially altering their gut ecology to get rid of the pathogen causing the dysentery. But the B. subtilis was present only in warm dung; it would die out when the dung cooled. Not wanting the troops to ingest camel dung, the German high command and medical corps, instead, cultured large amounts of B. subtilis in vats and fed the broth from the cultures to the troops, stopping the outbreaks of dysentery. The Nazi medical corps even developed a way to dry out the B. subtilis and put it into powdered form for their troops. Since the Nazi experience with camel dung, B. subtilis has been used in much the same way as an antidysenteric agent.

In recent years, a new incentive and method of ingesting feces has resurfaced and has been heralded as a medical breakthrough—fecal microbiota transplants. If you are diagnosed with a gut infection caused by Clostridium difficile colitis or more commonly known as C diff, your doctor will more than likely immediately treat you with antibiotics.  This is because C diff will cause extreme diarrhea, fever, and abdominal cramping that could lead to death.  The problem is that many C diff infections treated with antibiotics are not eliminated because the C diff rapidly recover because of antibiotic resistance.  In 2013 researchers tried a radical approach to treating individuals with C diff infections.  By transplanting fecal matter from healthy individuals into the guts of individuals with C diff infections researchers were able to eliminate the C diff infection about 80% of the time.  You might be asking how the poop was delivered to the gut.  There are two routes to the gut and both routes have been used.  More recently though the oral route has been the preferred route.  Eating poop it turns out, can be a healthy activity.  We should note however that, so far, C diff is the only infection that fecal transfer efficiently treats. 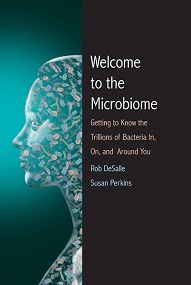