A century and a half ago John Stuart Mill said of English philosopher and political radical Jeremy Bentham, in effect, that he approached the world as a stranger. And, if the world did not fit his theory, utilitarianism, he dismissed what the world did as nonsense. Mill then said that what Bentham did not realize was that often that nonsense reflected the unanalyzed experience of the human race. Sometimes, Mill implied, the theory was right. But sometimes it is the world that is more sophisticated than the theory.

Law and Economics, today, reflects a similar division. There are many Benthamites—Economic Analysts of Law—around. These scholars look at the legal world from the standpoint of existing economic theory. And if the world does not do what that theory seems to suggest it ought to do, they dismiss the world as irrational. But there are followers of Mill among Law and Economics scholars as well. These also start out by looking at the world from the standpoint of economic theory. If the theory and practice don’t mesh, however, they don’t simply dismiss the world. They instead examine whether it might be the theory that is inadequate. And, having done so, they try to make the theory more nuanced, while still theoretically sound. They then see if the amplified theory can explain why the legal world is what it is. And, if it proves out, they go on to use this more complex theory in analyzing areas of law often far removed from that which first led them to modify the theory.

The Benthamites have been immensely effective in the last fifty or so years in bringing about changes in many areas of law. But sometimes these reforms have not been beneficial, because they have been grounded in the assumption that the theory was necessarily correct and the world was inadequate, when the opposite was in fact the case. Making law the handmaiden of economic theory in this way, rather than using the analytical strengths of economics in conjunction with the empirical data about human wants and needs that the law furnishes, impoverishes both fields. It can also lead to bad policy results.

One can see this by looking at any number of real world arrangements that are not adequately explained by economic theory. Among these is the widespread existence of altruistic behavior—by individuals, in firms, and in government. Economic theory has long failed to explain adequately why there is so much beneficence around and why so many non-profit institutions exist. Self-interest, it is said, would be more effective in getting things done. Why then does so much altruism perdure? There is a good, simple, and important theoretical answer to this! Similarly, lawyer-economists often criticize our unwillingness to let certain goods, like education, health care, body parts (kidneys and blood) be allocated in the market. Why don’t we just let such so-called merit goods be the subject of individual purchases and sales? Prohibiting such transactions is often decried as unjustifiably paternalistic. But is it? I think not. If relatively few changes were made in economic theory changes that are quite consistent with the field—such real world behavior, like altruism and the treatment of merit goods, can be easily explained and justified. Moreover, that deeper and more nuanced economic theory can then be used to structure that behavior better and make the rules that accompany it more effective. Not only that, but that better theory will prove helpful in many, many other areas as well.

The future of Law and Economics lies in this sort of mutual relationship. It lies not in making law subservient to economics, but in using the analytical strength of economic theory in conjunction with the empirical insights into people s wishes that the legal system gives. So combined, both theory and practice will become better able to serve our wants and needs.

Guido Calabresi is a senior judge on the United States Court of Appeals for the Second Circuit and Sterling Professor Emeritus at Yale Law School. He is the author of The Future of Law and Economics. 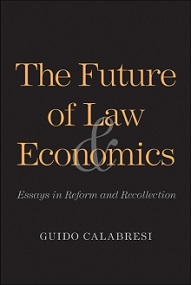