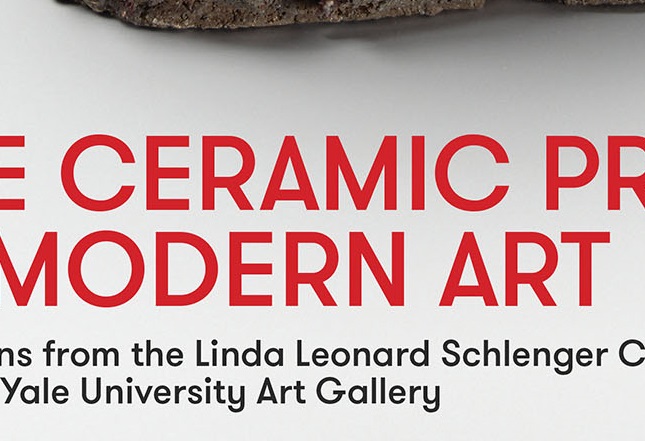 Long on the fringes of mainstream narratives of modern art, ceramics are typically considered a field of practice entirely distinct from painting, works on paper, and more conventional forms of sculpture. The Yale University Art Gallery’s recent publication The Ceramic Presence in Modern Art: Selections from the Linda Leonard Schlenger Collection and the Yale University Art Gallery seeks to correct this misperception, presenting ceramics from the later 20th century alongside contemporaneous works in other media and cultivating an awareness of the connections across disciplines. In the catalogue, these connections coalesce into three areas: the theoretical, the formal, and the biographical. As an introduction to the project, we can explore the biographical connections between some of the artists featured in the catalogue, and the rich creative exchange among them that brought ceramics into the broader ecology of contemporary art.

In the 1960s and 1970s, artists living in the San Francisco Bay Area created a vibrant network in which ceramics played an important role. A central figure in this movement was Robert Arneson. Arneson was a native of the North Bay, blue-collar town of Benicia and grew up with a keen interest in cartooning. He worked as a grade-school art teacher after attending the California College of Arts and Crafts in Oakland and soon began studying for an M.F.A. at Mills College, also in Oakland, where he focused on ceramics. Arneson pursued what was, at the time, a conventional approach to studio pottery: making tasteful, skillfully executed vases, bowls, and other domestic forms on a wheel while combining European and East Asian aesthetic traditions with elements of midcentury modernism.

By the early 1960s, though, everything began to change. Peter Voulkos, the influential bad boy of American ceramics, had moved to the Bay Area in 1959 to teach at the University of California, Berkeley. Along with his students at the Otis Art Institute in Los Angeles (now Otis College of Art and Design), Voulkos had in the previous five years embarked on a new approach to ceramics—often working on a very large scale, literally and figuratively tearing apart the conventions of pottery and reimagining them as expressionistic sculpture. Arneson took up the cue offered by Voulkos and began making sculpture in ceramic, sometimes with the vessel as a reference point, as in a series of trophies from 1963–65. Given his early interest in cartooning, Arneson incorporated figurative imagery, including body parts with a surreal edge as well as explicit sexual and scatological elements.

In 1962 Arneson began teaching at the newly formed art department at the University of California, Davis, close to Sacramento but still within the artistic orbit of the Bay Area. Other well-known visual artists to teach at UC Davis included William T. Wiley, Manuel Neri, Wayne Thiebaud, and Roy De Forest. The university’s art department soon became widely influential, not just because of the quality of the faculty but also because students worked across disciplines. Rather than specializing in one medium, graduate students were encouraged to explore a range of possibilities.

Bruce Nauman, a student at UC Davis from 1964 until 1966, is a prominent example of an artist who benefited from this cross-disciplinary approach. Nauman came to the school interested primarily in painting, but he soon began to work sculpturally. His principal adviser was Wiley, a painter who worked mostly in a figurative idiom. Nauman also received important instruction from Arneson, though, and created several early works in clay that still survive. He soon began working with a wider range of materials, including fiberglass and concrete, often with his body as a reference point. Similarly, the body was at the center of Arneson’s work, as self-portraiture became his principal format of expression by the early 1970s.

Humor was also a critical aspect of Arneson’s art, whether in the surrealistic elements of his early works or the punning imagery and titles of many of his self-portrait sculptures. Wiley also engaged with humor, as seen in Conduct Unbecoming an Orifice, Sir, a collaborative work by Wiley, Robert Allan, and Robert Hudson. The graffiti-like scrawls, sexualized humor, and visual inversions in the work are all emblematic of an irreverent strain of Bay Area art spanning a variety of media.

The threads of humor, body-oriented sculpture, and the intermingling of ceramics with other media in the Bay Area connect around the “slant step,” an enigmatic object that inspired an array of artworks. Nauman and Wiley spotted the small step-stool-like wooden object with a single slanting, rather than flat, step in a thrift store in 1965 and brought it back to UC Davis. Dubbed the “slant step,” it soon migrated throughout the art studios, developing a cultish following among the students and faculty. It also inspired a 1966 exhibition in San Francisco, which included interpretations of the object in plaster, by Wiley, and ceramic, by Jim Melchert, a sculpture professor at UC Berkeley.

While the Bay Area was not the only site of fruitful interchange among artists working in clay and in other media, in the 1960s and 1970s it was one of the most intense. Arneson, Wiley, Hudson, Melchert, and others pursued art in a range of media, considering clay as one option available among many. In recent years, as more and more artists work across disciplines, this type of approach has come to take on greater prominence in discourse about artistic processes. In The Ceramic Presence in Modern Art, readers are prompted to consider objects individually as well as in groups or pairs, where juxtapositions can illuminate surprising relationships. The catalogue also includes installation photographs from the related exhibition at the Gallery—which was presented in fall 2015—that allow readers to gain a sense of how the artworks appeared on view together. In addition to discovering unexpected connections among artists and artworks, I hope that readers will gain a greater understanding of the role of ceramics in modern art.

Sequoia Miller is a studio potter and doctoral student in the History of Art Department at Yale University. He is the author of The Ceramic Presence in Modern Art.