In the early years of the Cold War—driven by fears of border-infiltrating subversives and diseased immigrants—the U.S. government and media began obsessing about the nation’s “wetback problem.” Reports estimated that thousands of undocumented Mexicans had crossed into and were working in the United States. In response, on June 13, 1954, the INS launched its infamous paramilitary “Operation Wetback.” Over the next three years, Border Patrol officers raided public spaces, workplaces, and private homes in the U.S. Southwest and deported hundreds of thousands of undocumented migrants by bus, train, plane, and boat.

An intense fear of la migra in the 1950s developed among undocumented Mexican immigrants and U.S.-born Mexican Americans alike—not only because immigration officials sometimes mistook the latter for the former, but because in some cases, romantic connections and love had bloomed across borders of nationality. Circuits of migration and social interaction often brought Mexican immigrant men into contact with Mexican American women in the workplace, in dance halls, or at church. And even though many of these women had grown up being discouraged or prohibited from dating Mexican immigrant men—due to friends’ or parents’ ideas that these men were financially unstable or womanizers who simply wanted a green card—many Mexican American women dated, had sex with, loved, and married partners who were either guestworkers or undocumented.

In fact, this controversial kind of romance happened so often that it was the subject of popular Spanish-language songs and movies of the time. Films like Pito Pérez se va de Bracero (Pito Pérez Becomes a Bracero, 1947), Espalda Mojada (Wetback, 1952) and El Fronterizo (The Border Man, 1952) all featured migrant protagonists tempted by U.S.-born women they met in dancehalls, bars, and brothels. Eulalio Gonzáles’s song “Natalio Reyes Colás” (“Nat King Cole”) used wry humor to describe how a Mexican migrant named Natalio quickly Americanized his name (and himself) after meeting an alluring Mexican American woman who—unlike the wife he left behind in Mexico—cooked him “ham and eggs” and “hamburger with catsup” instead of his usual tortillas with chile.

During the time of Operation Wetback, however, a relationship with an undocumented immigrant was anything but humorous, and could have serious consequences for one’s heart and family. One’s romantic partner could be apprehended while at work or on the street, never to be seen again. Numerous immigrant fathers or fathers-to-be were separated from their wives and children. Some Mexican American women were abandoned by their lovers who fled across state lines (sometimes into the arms of another lover they maintained there) in their efforts to elude immigration authorities. Layered beneath and between INS deportation files and reports is evidence of much heartbreak, of immigrant-citizen love that was consistently tinged with fear of discovery, loss, and disappearance.

Catalina Alvarez, a Mexican American woman who worked as a supervisor for many years in California strawberry fields, recalled her own romances with Mexican immigrants and the hostile legal and social environment in which those relationships developed. “The 1950s were a time when . . . very few people were like me and knew [these men] were human.” In an era when cross-national relationships were fraught with complications and risks, Alvarez and many other Mexican American women became important and different kinds of border crossers, forming intimacies with a group of men that were deemed dangerous and undesirable in American society. In the time of Operation Wetback, their love stories were the most likely to have sad endings, and their hearts the most likely to be painfully stretched over the space of two nations.

Lori Flores is assistant professor of history at the State University of New York at Stony Brook. She is the author of Grounds for Dreaming. 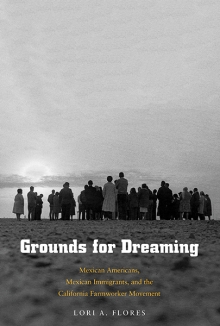