The twentieth century saw the development of two great theories in physics. The first, the general theory of relativity, explains the behavior of things on the large scale, up to and including the entire Universe. The second, quantum theory, explains the behavior of things on the small scale, down to and beyond the realm of subatomic particles such as electrons. In the middle ground, for things about the same size as us, or the Earth, you can get away without using either of these theories, because Newton’s laws of physics apply accurately enough for everyday purposes, even though they are not precisely accurate. This is why “Newtonian” physics seems to be “common sense” to us, while concepts such as relativistic time dilation and quantum uncertainty do not. It is probably also because this middle ground of physics is relatively well-behaved that creatures like us have evolved to be the way we are. But there is actually no overlap between the two great theories. Although between them they can explain everything, this seems untidy; physicists yearn for a single “theory of everything”, or ToE, that will combine everything, both quantum physics and relativity theory in one set of equations that will explain everything in the Universe, and the Universe itself.

Because physicists have not (yet) come up with a ToE, some people have questioned whether there might be a flaw in the whole enterprise of theoretical physics. Is it possible that we have been barking up the wrong tree (or trees)? But these critics have missed a crucial piece of evidence that our theory of the very small—quantum theory—agrees precisely with our theory of the very large—cosmology, aka the general theory of relativity. This is in spite of the fact that the two theories were developed entirely independently and have never been “unified” in a single package. Although nobody has been able to unify these two great theories in one package, quantum gravity, the fact that they separately give the “right” answers to the same critical question tells us that there is something fundamentally correct about the whole of physics, and, indeed the whole scientific enterprise. It proves that the whole scientific enterprise works.

What is that profound question? How do we know they agree? Because the age of the Universe calculated by cosmologists, 13.8 billion years, is just a tiny bit greater than the ages of the stars it contains calculated by astrophysicists. This is such a profound insight that it ought to be shouted from the rooftops; instead, it is taken for granted. If it doesn’t sound impressive, imagine how scientists would feel if it was the other way round—if stars were measured as being older than the Universe! It would tell them that at least one of their two most cherished theories, quantum physics and the general theory of relativity, must be wrong.

Why? Because our understanding of how stars work is based entirely on quantum physics. It is quantum physics that explains how hydrogen is converted into helium in the heart of a star like the Sun, keeping the star hot, and which tells us how long a star can keep “burning” like this. More subtle applications of quantum physics, akin to the way materials on Earth can be dated from their content of radioactive carbon-14, tell us how old the oldest stars are. Relativity theory, combined with measurements of the rate at which the Universe is expanding (the famous cosmological redshift) tells us, entirely independently, how old the Universe is — how much time has elapsed since he Big Bang. The close agreement between these calculations of the ages of stars and of the age of the Universe is remarkable precisely because the calculated ages of stars depend upon our understanding of quantum physics, which applies to the smallest things in the Universe, while our calculations of the age of the Universe depend on the general theory of relativity, applied to the largest possible scale. And it is even more remarkable that the two numbers come out the right way round.

This is arguably the most important fact in physics—indeed, in science—so it is worth emphasizing. Our measurements of the ages of the oldest stars show that they are just a little bit younger than the Universe. And this tells us that the whole scientific enterprise is on a secure footing —with or without a Theory of Everything.

John Gribbin is a visiting fellow in astronomy at the University of Sussex in the United Kingdom and the author of many best-selling science books. 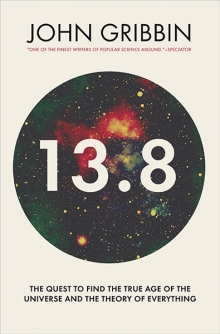