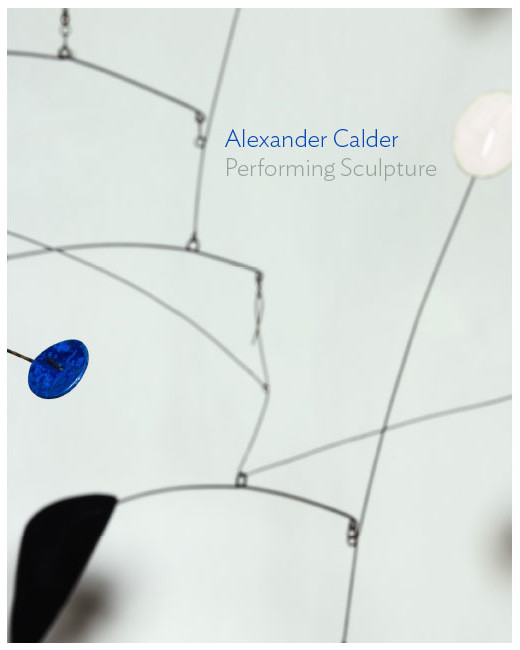 In a 1964 photograph of Alexander Calder’s retrospective at the Guggenheim, children are touching the sculptures. They are blowing on them, pressing against them, kneeling on them. A 1959 photograph of an exhibition at the Stedelijk Museum in Amsterdam shows men and women reaching up to push a low hanging mobile. Mid-century, these were not strange occurrences. Calder’s sculptures, which are now hung out of arm’s reach and guarded by signs urging viewers not to touch, tap, or blow, were once interactive.

When he created them, Calder intended his mobiles to be handled. Although he urged caution, noting, “gentle is the world,” in 1943 he described the best way to set his sculptures into motion. He wrote, “In their handling, ie. setting them in motion by a touch of the hand, consideration should be had for the direction in which the object is designed to move, and for the inertia of the mass involved…A slow gentle impulse, as though one were moving a barge is almost infallible.”

Alexander Calder: Performing Sculpture, currently on view at the Tate Modern, is a monumental exhibition, less a retrospective than an exploration of the ways in which Calder’s art interacts with its viewers. Spanning 40 years, Performing Sculpture makes it clear that, although Calder’s mediums changed, his central preoccupations did not — throughout his career he remained interested in performance and performativity, dance, and the differences between automated and free movement.

Born in 1898, the son of a sculptor and performance artist, Calder was creative from the beginning (although he trained as an engineer he returned to art in his twenties, enrolling at the Art Student’s League in New York, and later moving to Paris to pursued art making full time). His earliest documented sculptures, made in 1909 at age 11, are animals made of bent sheet brass, a dog and a duck. The duck, which rocks when tapped, is also his earliest interactive, kinetic work. Although not on display at the Tate, some of his earliest professional works are, many of which — Dog (1926) and Elephant (1927), both associated with his wood and wire Cirque de Calder — bear striking similarities to his teenage experiments.

The exhibition’s first major room is dedicated to Calder’s circus. Cirque de Calder encompasses both Calder’s performance of his circus, and the sculptures within it. Around the edges are drawings and sculptures related to the circus — static wire acrobats and strong men, tightrope walkers and contortionists. His circus, fully figurative, looks ahead to his dancing mobiles. But it was not merely a stage in his development; Calder would perform his circus throughout his life — a video recording of him on the wall is from 1961, by which point he was already enormously famous (he had already been commissioned for several public sculptures, and was the subject of a retrospective in the MOMA). Regarding his fascination with the circus, Calder wrote, “It wasn’t the daringness of the performers, nor the tricks and gimmicks, it was the fantastic balance in motion that the performers exhibited,” movement that he would try to capture again and again throughout his career.

Even as Calder returned continually to his circus, he began to explore abstraction, describing a 1930 visit to abstract painter Piet Mondrian’s studio as the shock that converted him, “like the baby being slapped to make its lungs start working.” From then on, he worked primarily with shapes, instead of representative form — circles, squares, triangles — and bold colors — red, yellow, black, white. He began, too, experimenting with works that could move with minimal human interaction. Small Feathers (1931), named after his dog, vibrates a tail of black and red weights if the white sphere counterweight is pushed. Untitled C (1934) has a mobile of metal hoops and a sphere hanging within a larger metal ring. Like performers within the ring of a circus, a small push sets the central players spinning, sometimes colliding with each other or the frame. Here, Calder began to translate his flat circus performances into the air.

Calder experimented with the best way to construct works that would dance like actors on a stage. In one room of the exhibition, several wall-mounted pieces represent theatrical artworks, where mobile-like elements extend from static backgrounds. Snake and Cross (1936) is contained within a white wooden frame, all three of the objects, snake, cross, and border, suspended a foot from the wall itself, halfway between a painting and a sculpture. These pieces, perhaps more than any others Calder made, reflect his lifelong involvement in theater, where he would design sets for ballets and performances. In fact, Calder referred to these pieces as “ballet-objects,” the open frames and panels directly calling out to the framing of a proscenium arch.

Another, adjacent room shows Calder’s experiments with motorized sculptures, where a series elements would rotate separately, creating a complete cycle of many minutes or hours. Calder described motorized works as being able to “control the thing like the choreography in a ballet,” but he ultimately abandoned these, believing that the mechanization of his artwork destroyed the spontaneity of their dances. Motors made them too performative.

Thus, Calder sought out a more organic actor. Moving through the exhibition you can feel Calder searching for the perfect sculptural performer — a natural dancer; a piece that moves, but doesn’t have to be manipulated. He found his ballerina with the hanging mobile. In 1951, Calder wrote, “The underlying sense of form in my work has been the system of the Universe.” For him, “the idea of detached bodies floating in space…some at rest, while others move in peculiar manners” was “the ideal source of form.” Finally, he was creating works that performed like swirling solar systems – governed by an internal logic, based on physical rules, but with an infinite possibility of motion permitted by dozens of separate orbits. What is more organic than the universe itself?

The final rooms of Performing Sculpture are like a miniature exhibition in themselves, a survey of Calder’s experiments with the mobile form. Many of them are named explicitly after nature, like Vertical Foliage (1941), or Snow Flurry I (1948), which is positioned against a translucent curtain providing a glimpse of the sky and city beyond. Similarly, Gamma (1947), branches like the veins of a leaf, or the limbs of a phylogenetic tree. Each sculpture is a natural phenomenon, and a dancer, all at once. Each is sensitive to the viewers in the room. Some of the sculptures, like Gamma, are exhibitionists. They are at their most expressive in front of large museum crowds. Other, like Red Sticks (1942), are shy. The mobile, which originally hung in Calder’s own bedroom, is almost still at peak visiting hours, spinning only for the smallest audiences.

Visual organic motion mastered, the exhibition moves into Calder’s experiments with sound. Three mobiles contain gongs and mallets, which will randomly connect, creating quiet dings. Quiet in an empty room, the sculptures require an audience, and the air currents of circling crowds, to perform. Jazz musician and avant-garde composer Earle Brown spoke of the similarities between his works and those of Calder; as a musician he felt he could “understand the idea of spontaneity and flexibility and mobility in some of that…the idea of the floating relationship of elements, never the same twice.” This can be seen especially clearly in his “Calder Piece,” a composition meant to be played upon Chef d’orchestre (conceptualized in 1963 and finished in 1966), a standing mobile which doubles as a percussive instrument. This piece, a jazz object that exists at once as a piece of sculpture and music, is what Calder spent his life seeking out: an actor capable of organic, unrepeatable performances, who dances both with and for its audience.

A modern viewer’s experience of Calder is necessarily different from a contemporary viewer’s. As his fame grew so did the necessity of preserving his artworks for future generations, and so museumgoers of the present can no longer touch objects that were made to touched. Still, although the pieces can no longer dance in response to a gentle tap, they are still performing, and because of protections, they will be performing for years and years. In 1977, the year after Calder’s death, critic and theorist Rosalind Krauss suggested that the theatrically of sculpture “implicates the viewer, asking him or her to take an increasingly active position.” As she suggests, no matter the restrictions and protections upon the artwork, the viewing experience is a private performance, each sculpture dancing for each viewer, intimate and untouchable.

Alexander Calder: Performing Sculpture is on display at the Tate Modern through April 3, 2016. The accompanying book, which shares the name of the exhibition, is available from Yale University Press.

And finally, a special thank you to Assistant Curator Vassilis Oikonomopoulos for his fascinating and thorough tour of the exhibition.