Forty years ago, intellectual historian Joseph Levenson famously commented: “What the West has probably done to China is to change the latter’s language—what China has done to the West is to enlarge the latter’s vocabulary.” Levenson was referring to a process that began in the decades immediately before and after 1900, through which Western disciplinary models superseded traditional schemes of knowledge classification in China. Borrowing Levenson’s metaphor, it is well known that Chinese intellectuals introduced a new “language” or ‘grammar’—academic philosophy—into China soon after the turn of the twentieth century, subsequently leading to the institutional incorporation of the discipline “Chinese philosophy” (Zhongguo zhexue) alongside Western philosophy.

Western philosophy provided key conceptual paradigms, vocabulary and technical terms, bibliographic categories, and even histories and periodization schemes essential to the demarcation, definition and narration of the discipline of Chinese philosophy. This was not, however, a simple case of the blanket inscription of Western philosophy upon a Chinese tabula rasa. Nor was the process by which Western models of knowledge categorization were introduced into China a passive one in which the “foreign” was imposed on the “native.” Rather, it was an ongoing process of negotiation and appropriation initiated and conducted by Chinese protagonists, in which traditional categories of Chinese knowledge were “translated” into the new academic category of zhexue.

Over the last two decades or so there has been a growing movement in Taiwan and Hong Kong to “Sinicize” or “indigenize” the social sciences, in particular social psychology, anthropology and sociology. The movement promotes a return to the cultural roots of “being Chinese” and the development of “Sinicized” social and behavioural science approaches to research. This has been in response to the perceived threat that the universalist claims of theory pose to the particularity of local cultural identity.

This trend has also found its way into Chinese philosophy. A growing number of Chinese academics have argued that “Western philosophy” has yet to acknowledge “the legitimacy” of Chinese philosophy and to engage it as an equal partner in dialogue. They have further insisted that the articulation and development of China’s philosophical heritage must draw exclusively on the endogenous paradigms and norms of China’s indigenous philosophical heritage—a heritage reduced to one dominant form, “Confucianism.” Buddhism is excluded on the grounds that it is a foreign import—despite having first been introduced into China two thousand years ago and subsequently becoming an integral part of the Chinese cultural landscape. This trend has, in turn, been further bolstered by a growing Confucian-centered Chinese cultural nationalism: a movement based on the ideological conviction that Confucianism is a cultural formation integral to the identity consciousness of the Chinese (Zhonghua) nation.

Over this period, the stocks in Confucian philosophy, especially so-called New Confucianism, have continued to grow. New Confucianism is a modern neo-conservative philosophical movement, with religious overtones. It has proven to be the most successful form of philosophical appropriation, reinvention and creative transformation of “Confucianism” in China, Hong Kong and Taiwan. Since the 1970s, it has grown to become the dominant philosophical current in Chinese philosophy of the late twentieth and early twenty-first centuries. Successfully transcending the geographical and political boundaries of China, Taiwan, and Hong Kong, since the mid-1980s, New Confucianism has played a leading role in bridging the cultural and ideological divide separating mainland and overseas Chinese scholars by providing a shared intellectual discourse.

For the Confucian cultural nationalists, New Confucianism is particularly important because from early on, New Confucian leaders chose to privilege Confucianism, championing it as the principal exemplar of indigenous Chinese thought and so best suited to nation- and state-building, even creating an elaborate genealogy to assert their authority as legitimate transmitters and representatives of orthodox Confucian values. This is despite the fact that these New Confucian thinkers were indebted to Buddhist constructs. Although these New Confucian thinkers were clearly cognizant of their engagement with a broad range of Buddhist themes, which were integrated into conceptual hierarchies designed to privilege Confucian values, those conceptual constructs are actually sophisticated syncretic hybrids of Buddhist and Confucian thought, in which the “grammar” of the hybridity sublates the “vocabulary” of its constituent Confucian and Buddhist elements

Because of the nationalistic privileging of Confucianism within the Chinese academy, the intellectual constitution of the main exemplar of modern Chinese philosophy continues to be misrepresented, both in China and beyond. The debt that New Confucianism owes to Buddhism is philosophically and historically significant. The philosophical significance of this debt is that it provided New Confucian thinkers with the conceptual tools to develop the most creative ontologies and epistemologies in modern Chinese philosophy. The historical significance is that it challenges the nativist paradigm endemic in the Chinese academy.

Although a small number of scholars have identified a range of Buddhist concepts and themes in the writings of representative New Confucian thinkers, the international scholarly community carries on with what it knows to be a simplification: New Confucian thought is essentially just a continuation of traditional Confucian thought with a few incidental borrowings. To some extent this situation is understandable, for even the New Confucians identified themselves with Confucianism rather than Buddhism.

From the beginning, New Confucians did not just borrow Buddhist concepts but, as part of their system building, they also appropriated those concepts to construct an ambitious synthesis of ideas. Having access to rigorous studies and translations of key Neo-Confucian philosophers such as Xiong Shili (1885-1968), Liang Shuming (1893-1988), Tang Junyi (1909-1978) and Mou Zongsan (1909-1995) will help debunk the myth that modern Chinese philosophy owes its identity most especially as a continuation of Confucianism, to the exclusion of the fundamentally “foreign” influence of Buddhism. Revealing the extent to which the complex and diverse intellectual make-up of modern Chinese philosophy has been ignored, distorted or misunderstood will in turn warrant a critical re-assessment of hand-me-down assumptions about just what it is that purportedly makes Chinese philosophy unique and “exceptional”, that is, the claim that it is a hermetically sealed tradition that can be understood and adjudicated only by reference to its own endogenous norms and premises. 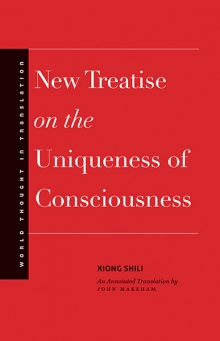