In the presidential campaign of 2012 there was hardly a mention of income inequality. This time is different. Even the Republican candidates say that it is a problem. The current candidates should address income inequality and not just mouth stale bromides. They should frame the issue around three points, namely (1) why it happened (2), why it matters, and (3) how to fix it. Here is the beginning of a stump speech I would recommend.

“We all know now that almost all the gains from economic growth have gone to the top 1% in recent decades. Economists believe that is due to globalization and technological change. They are wrong. All the other rich nations face the same forces of globalization and technological change that we do, yet they have not had such extreme increases of income inequality. It is due mostly to politics. Congress has hamstrung labor and consumers while favoring corporations. Unions have diminished clout because membership has shrunk. Consumers have been denied the right to bring class action suits against predatory corporations. They are forced into arbitration where the deck is stacked in favor of corporations. Washington lobbyists representing corporations have greatly increased in number as well as in expenditures, dwarfing union and public interest lobbyists. The tax code has been rewritten to favor the wealthy by eliminating or reducing the estate tax, taxing capital gains at a lower rate and giving the ‘carried interest’ gift to hedge and equity funds. That is why income inequality rose so much since 1980.

“But does it matter? Rising income inequality was a major factor bringing on the expansion of household debt that became unsustainable once the housing price bubble burst. The debt buildup was not frivolous. Decades of slow growth and rising income inequality produced stagnant incomes for most households. At the same time, the exploding demand among top earners pushed up the prices for housing, health care and education. The desire to maintain living standards as prices for those items soared made the easy availability of credit almost irresistible. Surely then, rising income inequality matters. It matters for understanding why households took on unsustainable debt. It matters for understanding why the economic recovery has been so slow because of the huge overhang in household debt. It matters for understanding how to prevent a repeat of the Great Recession.

Matthew P. Drennan is a visiting professor of urban planning at UCLA and an emeritus professor in the Department of City and Regional Planning at Cornell University. 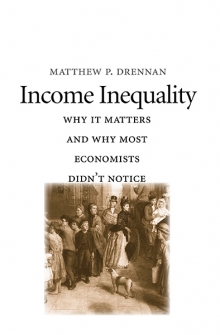