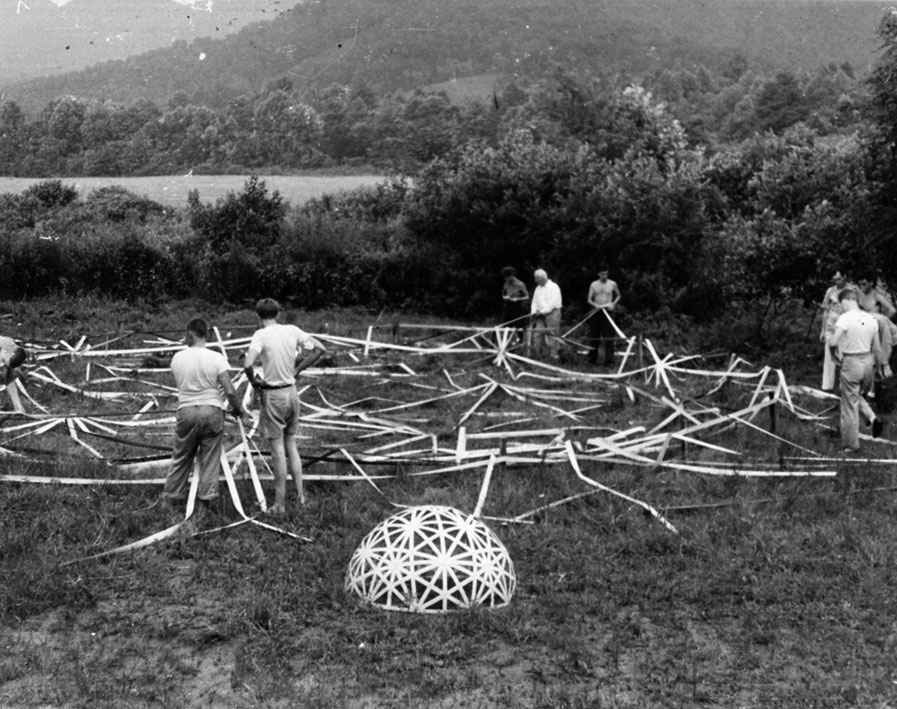 Image above is a photograph of a class at BMC taught by Buckminster Fuller; used with permission.

In the mid 1930s, the years leading up to World War II, America’s great socialist moment was underway. New Deal programs like the Works Progress Administration employed thousands in arts, architecture, theater, literature and the media, who transformed the country’s cultural landscape forever. This dynamic spirit carried over to the field of higher education, which initiated some radical new approaches to teaching, learning, and applications of the creative process in the real world. Philosophers like John Dewey proposed new ideas for education whereby students would shape their own curriculum, and participate in the operation of the school.

It is no wonder that the school soon attracted a student body that would count among its classmates some of the most prominent avant-garde figures of the 1950s and ’60s. The climate of experimentation and free spirit at Black Mountain nurtured an incredible roster of artists, writers, musicians, and performers. Among the alumni were now-well-known figures such as Robert Rauschenberg, John Chamberlain, Kenneth Noland, Dorothea Rockburne, Ray Johnson, Cy Twombly, Elaine de Kooning, James Bishop, and Robert Creeley, to name just a few.
Black Mountain College is now the subject of a major traveling museum exhibition, “Leap Before You Look: Black Mountain College: 1933-1957.” Organized by the Institute of Contemporary Art/Boston (ICA), and curated by its former chief curator, and now chief curator at Los Angeles’s Museum of Contemporary Art Helen Molesworth, and ICA associate curator Ruth Erickson, the exhibition contains some 250 objects by nearly 100 artists. The show, which debuted at the ICA last fall, is currently on view at the Hammer Museum, UCLA, through May 14, before traveling to the Wexner Center for the Arts, Columbus, Ohio, Accompanied by a hefty catalogue with essays by the curators, plus extensive documentary material, “Leap Before You Look” is a thorough examination of this important moment in 20th century art, whose influence continues to be felt today.

I recently spoke with co-curator Ruth Erickson about the exhibition soon after she returned from Los Angeles to attend the show’s opening there.

David Ebony: How does the Hammer’s installation of “Leap Before You Look” differ from Boston ICA’s?

Ruth Erickson: The ICA has concrete floors, 16-foot high ceilings; it’s a kind of typical kunsthalle contemporary art space. The Hammer’s galleries have lower ceilings, hardwood floors and moldings, which actually seems well suited to the time period of many of the works on view. So the biggest difference is in the architecture of the museum spaces; but the show looks great in L.A.

Ebony: What was the most radical thing about Black Mountain College?

Erickson: The Black Mountain College model was radical because it placed arts at the center of the liberal arts curriculum. This led to a lot of experimentation across media and subjects: dancing, painting, sculpture, as well as biology and mathematics. To make the point, in one area of the exhibition, we brought in one of the restored looms that Anni Albers had North Carolina craftsman build for her, and we installed it next to a grand piano. We realized that there are lots of structural similarities between the two. They both have pedals and strings, etc. But symbolically they could not be more different. One is a lowly craft tool, presumably, and the other is a great symbol of Western culture. At Black Mountain College there was parity between the two.

Ebony: What was the school’s academic standing or credentials? Students did not receive credits.

Erickson: The college was never accredited. No one could receive a BA or a MFA. The students were a dedicated group who would take the risk of attending without credits, but the college was actually very well respected as a place where you would get a good, well-rounded education. Many Black Mountain College students subsequently got accepted to very prestigious graduate schools, including Harvard and Yale.

An important thing to remember about Black Mountain College was that the students helped shape their own educations. It was a student-driven institution, motivated by the sheer desire to learn. It was the kind of learning that John Dewey had hoped formal education could or should be.

Ebony: It seems to have also been a major social experiment. I’m thinking of Helen’s [Molesworth] piece in the book, called “Gossip,” about all the social interconnections, and love affairs that the college milieu fostered. There seems to have been a wide variety of open relationships on campus.

Erickson: I think any time there are young people living together there’s a tumultuous emotional landscape that happens. The social interactions may have been unconventional at Black Mountain because of the interconnectedness of educational pursuits—work, and labor activities, a chance to interact with a wide range of individuals. Artists would comingle in unusual ways. Rauschenberg collected trash, for instance, and Stan VanDerBeek would fix things on campus.

The students were very close-knit because the campus was rather isolated in a remote rural community. In researching this project, I talked to a number of former students whose fondest memories were of the conversations with classmates and faculty. Breakfast conversations would stretch to noon because the exchange of ideas was so rich. This kind of interaction was key to the education there.

Ebony: In the book, you write about Ray Johnson, whose early work is included in the show. You say that Johnson “never strayed far from his Black Mountain roots.” I met Ray soon after I moved to New York City, and he always spoke highly of the artists he met there—and practically revered some of them, including John Cage, Merce Cunningham, Rauschenberg, Cy Twombly, and others who remained close to him.

Erickson: And, of course, that is where he met Richard Lippold, who taught sculpture at the college; the pair moved to New York together, and sustained a lifelong relationship.

Ebony: How did the school’s founder, John Rice, put together such an amazing faculty, and attract so many talented students?

Erickson: After Rice was forced to resign from Rollins College in Florida, in 1933, a number of Rollins faculty, staff, and students left with him. They eventually became the nucleus of Black Mountain College founded later that year. Rice was inspired by John Dewey’s idealistic principals of education, and Dewey himself visited the campus on a number of occasions. The school followed Dewey’s tenets, his ideas of “art as experience,” for instance, and that the students should be involved in the actual operation of the school, a process aimed to teach students to be responsible citizens in a truly democratic society.

Rice, though, didn’t know any artists himself. He met with Philip Johnson, who was the architecture curator at the Museum of Modern Art at the time. It was a period when the Nazis had just come to power in Germany, and artists and intellectuals there began looking for ways to emigrate. Johnson suggested that Josef Albers was the best one to lead the faculty. It was fortuitous. Josef and Anni Albers were able to leave Berlin to teach at Black Mountain College. It was Albers who invited such an interesting and diverse range of teachers, including Jacob Lawrence, Merce Cunningham, de Kooning, and the others. Albers was astute and had strong opinions about everything, but he was open-minded and saw the value of people working in many different idioms. It was really Albers who assembled this amazing galaxy of talent.

Ebony: Black Mountain College closed in the mid 1950s, and rather abruptly. How and why did that happen?

Erickson: There were many factors. The last summer art program was in 1953, and by that time so much had changed. One important factor was the new director Charles Olson. He was a respected poet, but not a strong administrator; he was not good at fund-raising. The college had been on the brink of closing a number of times, but in the past, a benefactor would step forward with a grant at the last minute to keep things running. Another factor was that the G.I. Bill had changed. Allowing grants to go directly to the veterans rather than the schools they attended had a negative impact on the institutions.

And the spirit of the times had changed; the 1960s were looming. Inventive and radical artists and thinkers were becoming more attracted to New York City than to rural North Carolina. It’s a complex question. I think the school’s ending was also in its DNA from the beginning. It seems that an institution that seeks to resist almost all bureaucratic structures perhaps can’t operate forever. It had to end.

Ebony: How did you come upon this as a subject for a major museum show? How did you know there would be a large audience for it?

Erickson: There was real desire and interest in this show from many parties from the very beginning. It addresses many questions that are in the forefront now regarding higher education and the huge challenges facing education in America today in general. Most educational institutions are under great financial stress, students are burned by debt and unemployment, and some schools are having an identity crisis.

Of course, beside the thematic interest, the art itself is amazing. When we started work on “Leap Before You Look” we had no idea of the incredible array of artists who went there or taught there beyond the best-known ones. There were many new discoveries for us, such as the painter Pat Passlof, and the student work of Ruth Asawa. And some surprises, such as the involvement of artists such as Ben Shahn and Jack Tworkov.

Ebony: Could something like Black Mountain College exist today?

Erickson: Funny that I was talking with a group of artists in Los Angeles when this question came up. You might compare Black Mountain College to liberal arts schools like Bard, and Bennington, and maybe Skowhegan. Warren Wilson College in North Carolina has a similar experimental approach, and in Berea College in Kentucky, students are involved with the day-to-day operation of the school. Tuition there is almost free. Black Mountain College’s tuition was actually quite high for the time, although there were many scholarships and grants available for dedicated students. Technology has changed so much, and today we absorb and process information in a way that is so different from the time of Black Mountain College. Ultimately, the answer to your question would have to be, no. 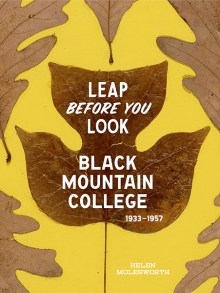