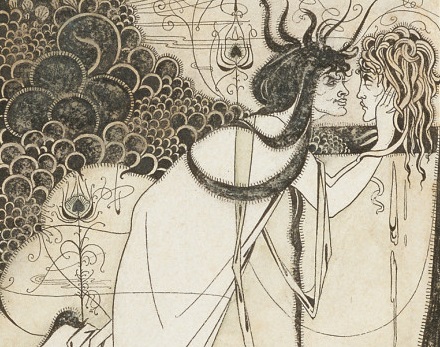 The association of Aubrey Beardsley (1872-1898) and Oscar Wilde (1864-1900) on the English edition and drawings for Wilde’s play Salome was arguably the most significant art and literary collaboration of the last third of the nineteenth century. Written in French Salome had originally been published without illustrations in France and England on February 22nd, 1893. A year later, almost to the day, Elkin Mathews and John Lane at the Bodley Head in London (and Copeland and Day in Boston) published the play in translation and with thirteen of Beardsley’s drawings, on February 24th, 1894.

The literary artist and the artistic playwright seem to have had a collegial, yet competitive affiliation. Wilde made snide comments about Beardsley’s sexuality, such as “Don’t sit on the same chair as Aubrey, it’s not compromising,” and Beardsley moved from the Hotel Sandwich in Dieppe because “Some rather unpleasant people come here.” Nonetheless, for all his patronizing comments, Wilde enthused about Beardsley’s talent in a copy of the French edition to the artist:

March ’93. For Aubrey: for the only artist who, beside myself, knows what the dance of the seven veils is, and can see that invisible dance. Oscar (now in Special Collections, Sterling Library, University of London).

We know that Beardsley made an illustration in December 1892 of Salome holding the head of John the Baptist, perhaps to obtain the commission to make the drawings for the translation. Indeed, Oscar chose Beardsley to illustrate Salome. But we are certain of very little concerning when Beardsley and Wilde first met, the way they worked together, or whether they related cordially in the late 1890s when both were ill and dying.

On 13 July 1892, Beardsley noted that he and Wilde first met in July 1891 at tea at the home of Edward Burne-Jones. Significant acquaintance, however, may not have begun until Beardsley met Wilde’s friend, Robert Ross, on February 14th, 1892, and Ross most likely then (re?)introduced him to Wilde. Later versions tell different stories and different dates of Wilde and Beardsley’s introduction, but by April 1893 at the latest, Wilde had seen, in the first number of the Studio, Beardsley’s drawing J’ai Baisé Ta Bouche, Iokanaan, the artist’s response to the French text. And a month earlier, in March 1893, the playwright and the artist were on a first name basis, as can be seen in Wilde’s inscription in Salomé. Wilde chose Beardsley to illustrate the English edition, and the publisher John Lane confirmed Wilde’s choice on June 8th, 1893, writing to the playwright that he had “this day seen Beardsley and arranged for 10 plates and a cover for 50 guineas!”

Beardsley began the drawings for Salome in late spring 1893, confiding in June to Robert Ross in the first extant reference to them, “If you happen to be near Elkin Mathews today they have a drawing (Salomé) to show you.” In August, he was pleased with his progress, “Salome goes famously,” he wrote to Ross, “I have done two more since I saw you; one of them, the Studio picture redrawn and immensely improved.” By September 27th, 1893, Beardsley had made all the originally contracted drawings for Salome. However, objections to some of them (a period the artist characterized as having “a warm time of it between Lane and Oscar and Co.”) and his creation of additional drawings as substitutes for the three that were withdrawn from publication indicate that his work may not have been completed until November. (The final number of drawings is twenty, including two front cover designs, Beardsley’s signature device for the back cover, an early version of The Woman in the Moon and the replacement drawings, eighteen of which were first published together in 1957.)

Having read Heinrich Heine, J.—K. Huysmans, Jules Laforgue, and the New Testament, Beardsley was visually influenced by the Greek vase collection at the British Museum, Gustave Moreau, Whistler’s Peacock Room, Japanese art, and the manner in which he envisioned Wilde’s play—particularly Wilde’s assertion in “The Truth of Masks” (1885): “A truth in art is that whose contradictory is also true.” Like Wilde, Beardsley attacked gender distinctions, undermining the law of power through male descent and patriarchal order. In addition to the startling composition of the drawings, many of which provide no ground lines, his creativity for this text shows him uniting drawings in other ways, such as symbols. For example, roses, a symbol of passion, bloom on the title page and encroach into the area then reserved for the letterpress. The rose is emblematic of Salome’s sexual awakening and her sensual dance for Herod as well as her stepfather’s lust and the attraction between the Syrian captain and the page. Thus, the stylized roses on the cover and in all but four drawings announce Wilde’s play as a theater of sexual intrigue. The blooms on the title page, which have no border, also epitomize Salome’s rupture of the boundary between proper and improper female behavior when she bargains with Herod for the head of John the Baptist. Beardsley’s conclusion about the drawings was, “My drawings for Salomé have aroused great excitement and plenty of abuse.”

Although there is some evidence that Wilde saw the drawings at the home of Charles Ricketts and Charles Shannon, the playwright certainly saw them in November 1893, when “Bosie” Douglas summoned John Lane to “bring the Aubrey Beardsley drawings round here [the Hotel Albemarle].” There is no evidence that Wilde attempted to censor any of the drawings before publication although, according to the critic Theodore Wratislaw, Wilde wanted Salome to “have a different face in every picture,” which, Wratislaw declared, would have been “effective.” Wilde, however, may have complained about them to Ricketts, who had, before Salome, illustrated or designed all of Wilde’s books: “My Herod is like the Herod of Gustave Moreau – wrapped in his jewels and sorrows. My Salomé is a mystic, the sister of Salammbo, a Sainte Thérèse who worships the moon; dear Aubrey’s designs are like the scribbles a precocious schoolboy makes on the margins of his copybooks.” Ricketts declared in 1932 that Wilde “detest[ed] the drawings.” Although Ricketts suggests that Wilde disliked their content, in 1940 the painter John Rothenstein reports that Wilde disliked their style – Japanese as opposed to his Byzantine play.

One other consideration must be raised. At least two drawings, The Woman in the Moon and Enter Herodias, include caricatures of Wilde, causing scholars to regard these, along with comments made by Wilde and Beardsley about each other, as evidence of “bad blood” between them. Beardsley disliked Wilde’s patronising attitude, but the caricatures are not vicious; in fact, each face wears a sad, indeed suffering, expression. Furthermore, in none of Beardsley’s images of Wilde lurks a depiction close to Max Beerbohm’s cruel and malicious George IV.

Mabel Beardsley maintains that the caricatures of Oscar were “too delicate for him to resent, and in any case he was compelled to admire the beauty of the drawings.” Her contention is supported by the one extant letter from Wilde to Beardsley, dated by Rupert Hart-Davis between October 1893 and March 1894. Its substance is Wilde’s invitation to dine with him and Robert Ross: “My dear Aubrey, I am charmed to find you are in town. Will you join Bobbie and me at dinner tonight at Kettner’s (Church Street, Soho) at 7:30. We are not going to dress. Ever yours Oscar.” Despite the patronising sound of “charmed,” the tone is not one of dislike; indeed, Oscar uses Beardsley’s first name, a sign of intimacy in an age when men addressed each other routinely by surname, and he seems genuinely interested in having Aubrey’s company. If the letter was written between October and mid-November, Wilde may not have seen all the drawings, but he no doubt had seen those that had been completed. Moreover, a letter (recipient unknown) by Beardsley written when Wilde was indicted for “gross indecency” dropped the poise and wit to sympathize:

Poor dear old Oscar, how horrible it all is. I am really upset about it – more than I think perhaps (quoted in Millard Catalogue 7, Summer 1922, item 613).

This letter, Beardsley’s visits with Wilde after the playwright was released from jail, and Wilde’s tribute to the dying artist suggest empathy between creative men whose prickly egos were easily wounded.

Linda Gertner Zatlin is professor of English at Morehouse College, Atlanta, and author of Aubrey Beardsley: A Catalogue Raisonné