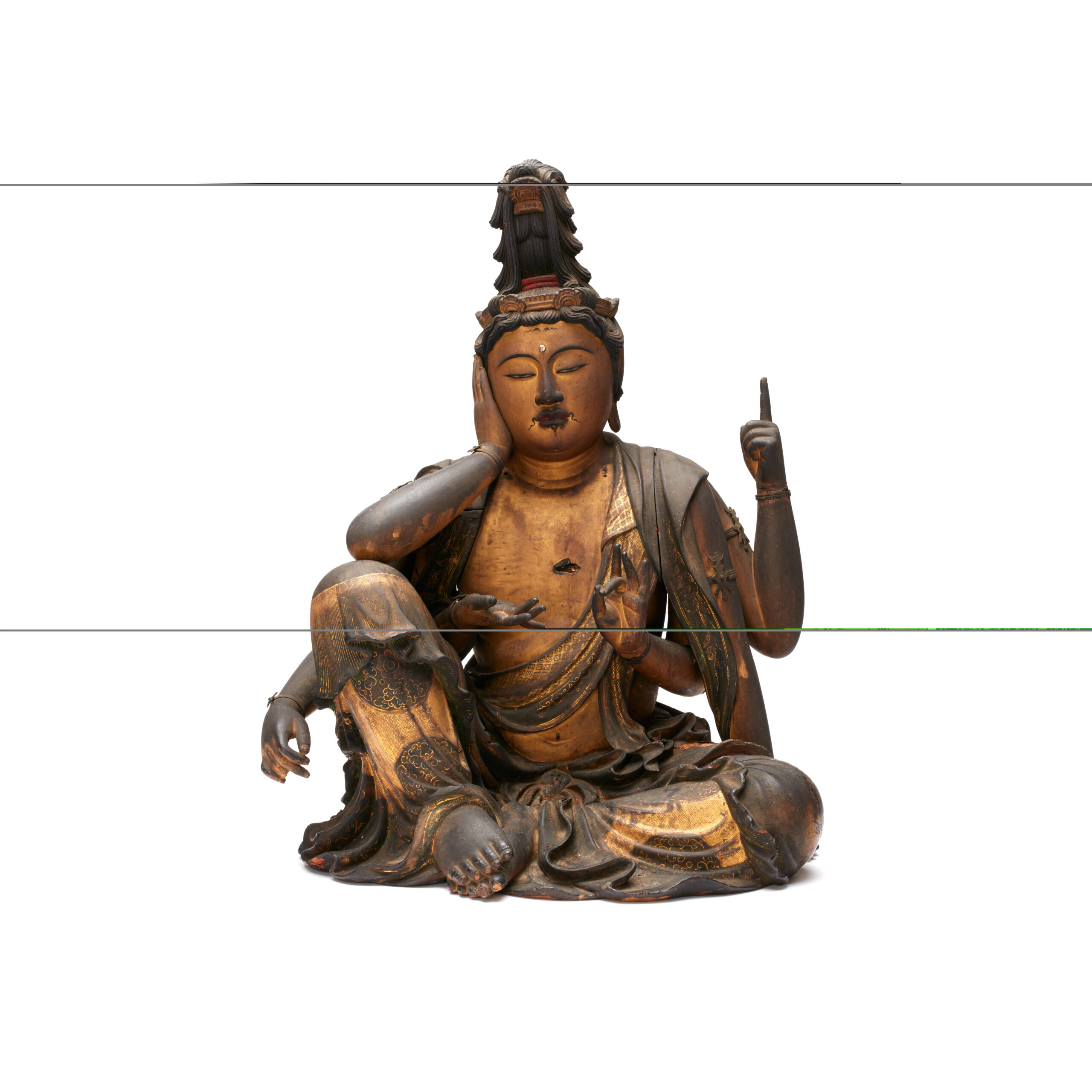 The beautiful statue of Nyoirin Kannon above represents an esoteric form of the bodhisattva of compassion, Kannon (known as Avalokiteśvara in Sanskrit and Guanyin in Chinese). Its six arms convey the bodhisattva’s power to save beings caught in the six paths of reincarnation. But even with this suprahuman feature, the figure is welcoming and approachable because of its serene expression and relaxed pose. Nyoirin rests his cheek gently on one of his hands, while his other arms would originally have held the customary attributes of this deity: a dharmacakra (“wheel of the law”) balancing on the upward pointing finger and a wish-granting jewel on the palm held before his torso. These two attributes, now missing from this statue, give the bodhisattva his name: “Kannon of the wish-granting jewel and wheel.”

The art of the Kamakura period (1185–1333), to which this sculpture dates, has long fascinated me because of its technical brilliance and attractive naturalism, but also for its essential role in Buddhist ritual and devotional practices. Nyoirin’s wish-granting jewel was linked with the imperial regalia, and the bodhisattva was worshipped in the inner quarters of the imperial palace for protection of the sovereign and the state. On the other end of the social spectrum, destitute commoners flocked to temples enshrining powerful local manifestations of this deity to ask for help with a whole range of concerns. Nyoirin Kannon was believed to aid in— among other things—healing physical afflictions, gaining material fortunes, conquering enemies, and conceiving children and safely giving birth. The bodhisattva likewise became identified with many native Japanese gods (kami), including the sun goddess, Amaterasu. As the varied forms of devotion to Nyoirin demonstrate, Kamakura-period religion was pluralistic in character, encompassing traditional esoteric rites sponsored by the aristocracy and elite warriors, new movements with popular appeal, monastic revivals of ancient doctrines, worship of the native gods, and fertile combinations of all of these.

Artistic developments in the Kamakura period were simi 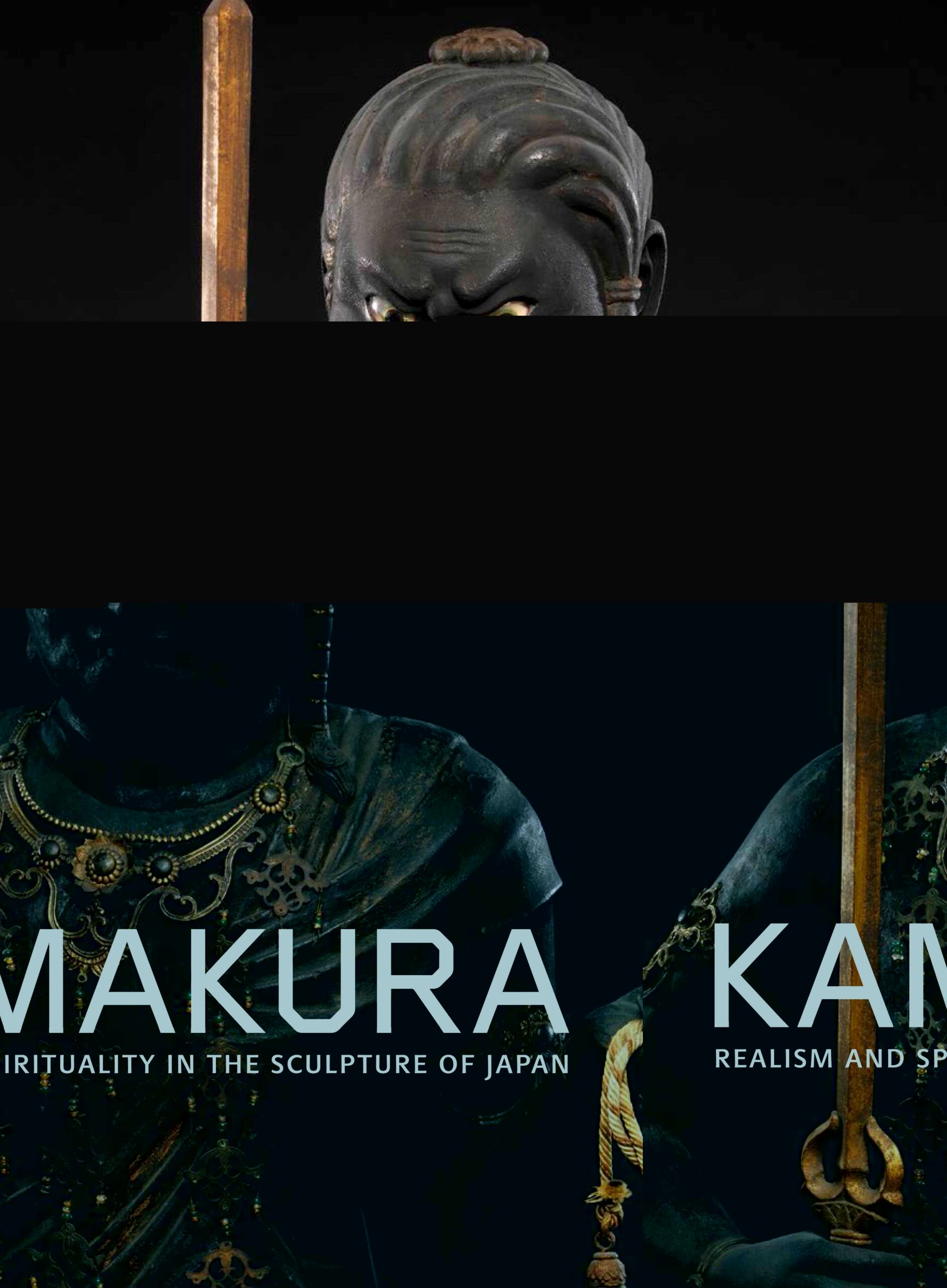 larly innovative. The tall, elaborate hairstyle and fluttering hemlines of Nyoirin’s draperies derive from Chinese styles imported to Japan during this time of frequent contact with the Asian mainland. In the ancient capital in Nara (the imperial court moved the capital north to Kyoto in the late eighth century), the Kei school of sculptors rose to prominence while helping to restore works lost to fire and warfare; in the new book I edited, Kamakura: Realism and Spirituality in the Sculpture of Japan, Samuel Morse’s essay discusses the development of the Kei school’s more naturalistic styles. Fortunately for historians, sculptors began signing their works with greater frequency, so we know much more about the individuals and workshops that created these works than in previous eras. This radiant statue of the historical Buddha Shaka, for example, is inscribed on a peg under the left foot: “the highly skilled craftsman hōgen Kaikei.” 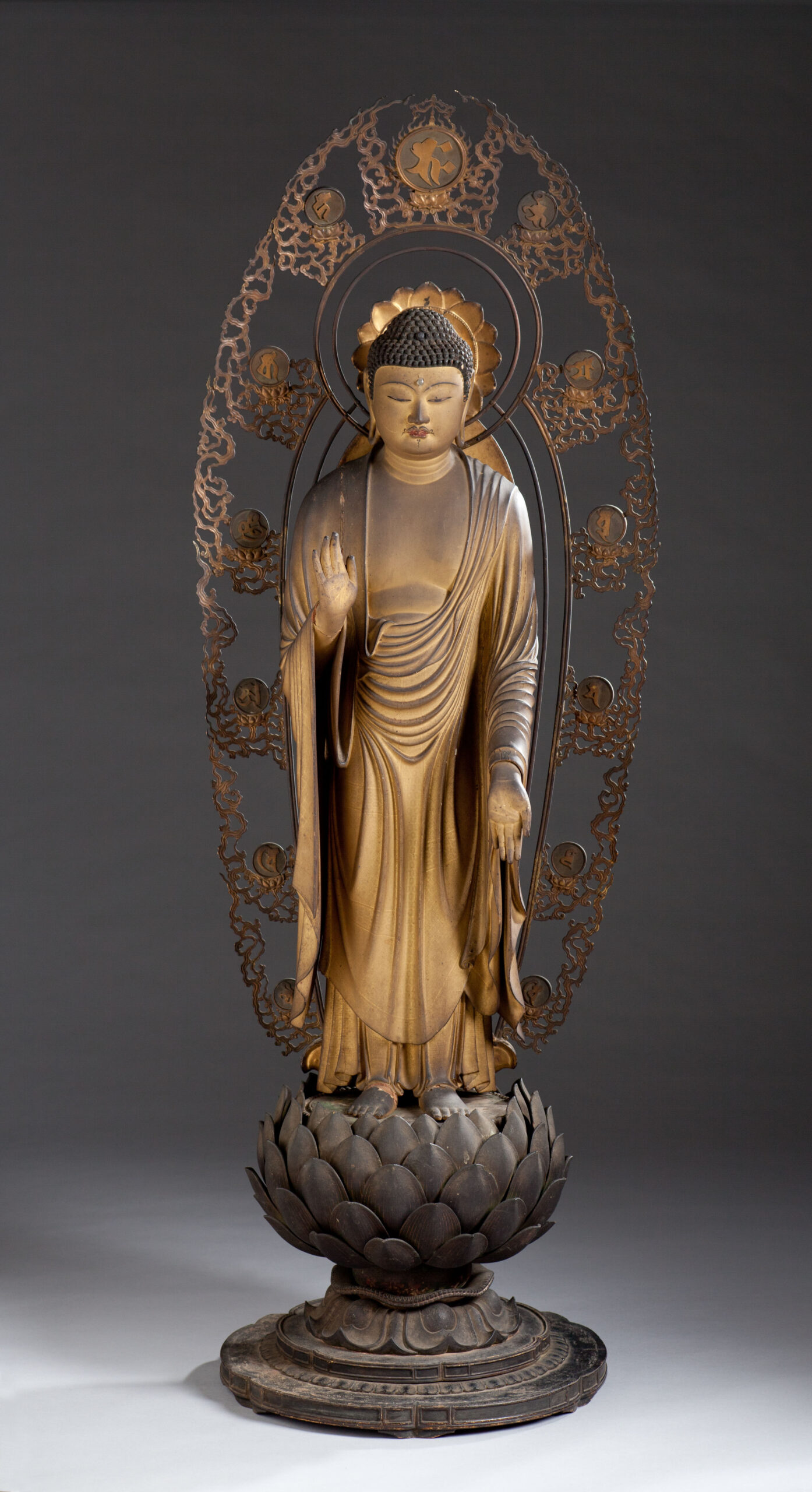 Kaikei was one of the most renowned sculptors of the late twelfth and early thirteenth centuries, and hōgen is an honorary ecclesiastical rank awarded for his accomplishments. The exhibition that this catalogue accompanies (“Kamakura: Realism and Spirituality in the Sculpture of Japan,” on view at Asia Society Museum in New York from February 9 through May 8, 2016) brings together three works by this master sculptor, along with many more masterpieces of Kamakura-period art from American and European collections.

In the process of preparing the exhibition, many of the included sculptures changed addresses, leaving their old homes in private collections and finding new ones in public institutions. Two of the works by Kaikei, for example, moved from the Mary Griggs Burke Collection to The Metropolitan Museum of Art in New York. Other works from the Burke Collection traveled west to the Minneapolis Institute of Art, including this small figure of Bishamonten; the MIA also welcomed a significant group of Kamakura-period statues from the Clark Center in California. 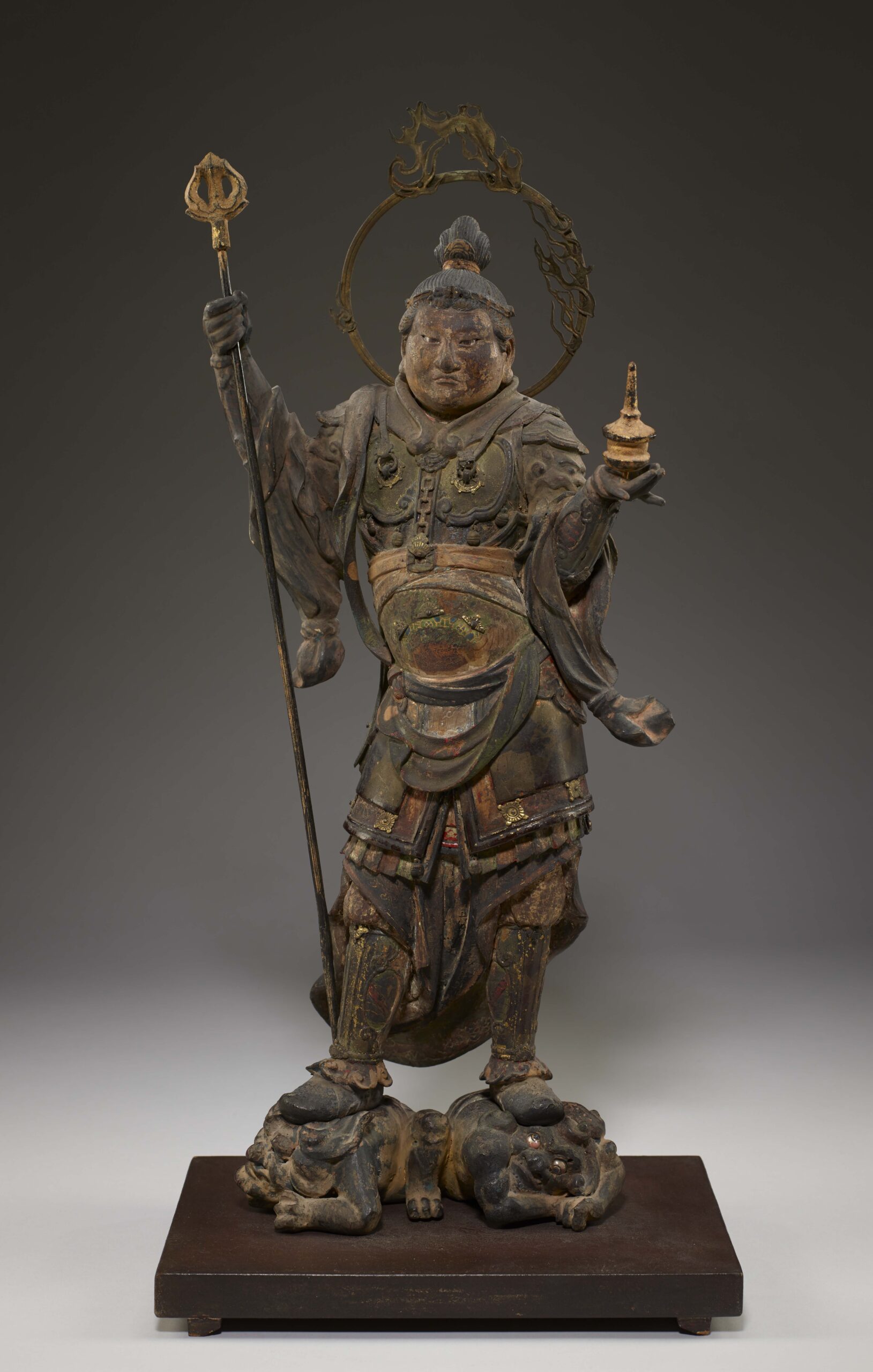 We are very grateful that these objects were allowed to continue their travels to Asia Society this spring to be featured in our catalogue and exhibition before they return home to represent the Kamakura period in the broader history of Japanese art at their home institutions.

One of the most dramatic innovations of this period, seen on most of the sculptures in the catalogue, was the use of rock crystal as an inlay for the eyes of statues. Combined with more naturalistic modeling of bodies, faces, and draperies, this gave icons a sense of life-like presence. This diminutive statue of Bishamonten, the guardian king of the North, evokes a real individual with a stern expression, fleshy face, and glinting eyes. Rock crystal inlay is even used in the eyes of the demon that the deity tramples, enlivening the work from top to bottom.

In the Kamakura period, the power of these icons came not just from the visible representation of a deity in wood or metal, but also from sacred items packed into the statues’ hollow interiors during consecration. Of course, not all statues were thus filled, and to what degree later devotees were aware of the hidden contents remains a matter of debate. We were very fortunate to be able to include in the catalogue and exhibition a Jizō Bosatsu from the Museum of East Asian Art in Cologne, a rare statue in western collections still accompanied by its original contents.  The ssays by Nedachi Kensuke and Hank Glassman both discuss the practice of sacred inscriptions and deposits in the interiors of images, which could include reliquaries, miniature statues, religious texts, and devotional prints with the names of donors. Moreover, the Cologne Jizō contained a dedicatory certificate naming the sculptor, Kōen, and the date of consecration (1249); it even lets us know that the statue took almost a month and a half to complete. Such texts and inscriptions provide crucial documentary evidence for art historians studying the Kamakura period. Ultimately, however, these icons and their contents are a tangible manifestation of the beliefs and wishes of Kamakura-period devotees: for enlightenment, for the salvation of loved ones, for the spread of the Buddhist teachings, and for the deities’ help in navigating the perils of human existence in this world.

This exhibition, co-curated by Ive Covaci and Adriana Proser, John H. Foster Senior Curator of Traditional Asian Art at Asia Society is on view at the Asia Society Museum through May 8th, 2016.  Read Ken Johnson’s glowing review in the New York Times.

Ive Covaci is a lecturer in art history at Fairfield University.