With the annexation of Crimea in March 2014, Russia has re-emerged at the forefront of the policy debate not only in academia, but also among the policy-making elite on both sides of the Atlantic. However, to treat this incident as an isolated case of realpolitik would be a grave mistake, as it would grossly oversimplify the nature of an ever more hawkish Russian foreign policy. In fact, overwhelming evidence suggests that Russia’s involvement in Ukraine follows a much grander plan of reimperialization in the twenty first century. To achieve this goal of resurrecting a lost empire following the fall of the Soviet Union, Russia has relentlessly employed various forms of propaganda, passportization campaigns and other destabilizing means which, if necessary, would prepare the groundwork for outright imperial expansion.

Granted, the use of terms such as “empire” and “reimperialization” may appear dramatic and archaic. Nonetheless, scholars are for a good reason talking more of empire today than they did twenty-five years ago. In the eighteenth century, the Russian Empress Catherine the Great occupied Crimea and also created the Novorossiya province along the Black Sea in the territories of present-day southern Ukraine and Moldova. It is no coincidence, therefore, that Russia’s current foreign policy has a striking semblance to the empire building traditions of its past.

It is no secret that the history of Russia is a history of empire. The Russian Empire was officially proclaimed by Tsar Peter the Great in 1721 and lasted until Russia’s February revolution in 1917. At its peak it stretched over Europe and Asia to North America and included colonies in Alaska and northern California. In landmass it was one of the largest empires in history, surpassed only by the British and Mongol empires.

While tsarist Russia was undoubtedly an “empire”— there is some disagreement whether the term can be applied to the Soviet Union. During the Cold War, most scholars did not perceive the Soviet Union as an empire even though it was multinational and hypercentralized. Only after the Soviet Union collapsed its labelling as an empire became widely accepted—in part because that was how the non-Russian popular fronts as well as Soviet Russian analysts widely described it during the late years of perestroika in the late 1980s.

Despite the fact that the Russian Federation of today greatly differs from the Soviet Union not only due to its regime type, but also because of its greatly diminished territory, Moscow has nonetheless retained some of the features of the days of the old. Most strikingly, the Russian Federation’s proclaimed special sphere of interest closely follows the borders of the Soviet Union and the Russian Empire. Also, outside the communist ideology, there was very little difference in the imperial project of the Soviets versus that of the Romanovs and increasingly little difference from that of Putin’s Russia which seemingly has adopted imperialism as its ideology. Moscow has always been the core and the other states and territories were the vassals in this centuries-long imperial project.

In fact, this empire building tradition, albeit with a slightly modern twist, has gained considerable momentum over the last decades. What I term “the reimperialization policy trajectory” begins with Russia’s cultural, economic, and linguistic influence over its compatriot populations abroad, and humanitarian policies that support the various rights of Russian speakers residing outside the Russian Federation. Then the politically reconstructed diaspora community of compatriots is institutionalized through various policies, including laws, programs, and organizations, such as the Russian state–funded Russkiy Mir Foundation and the Russkiy Dom network. Meanwhile, policies of passportization create concentrated groups of Russian citizens outside Russia’s borders. Then the conditions are set for Moscow’s information warfare campaign targeted at domestic, foreign, and compatriot audiences that proclaims an “urgent” need for the protection of Russian compatriots and citizens in foreign territories. The final stage is the fueling of separatism that results in Moscow’s de jure annexation or de facto control of the territories where the compatriots reside.

The most flagrant examples of where this modern day neo-imperialism has been employed was in Ukraine, Georgia and Moldova. To date, Crimea is the sole case of outright annexation. By contrast, Moscow has still not recognized Transnistria’s independence nor tried to annex the territory, despite the fact that it declared its independence from Moldova in 1990. Nonetheless, albeit internationally unrecognized, Transnistria has in effect become Moscow’s puppet territory. Georgia’s South Ossetia and Abkhazia have declared independence and both are now seeking closer integration with the Russian Federation. Eastern Ukraine’s militant-run “people’s republics” of Luhansk and Donetsk are likely to follow in the footsteps of South Ossetia, Abkhazia, and Transnistria. The separatist forces in the conflict zones in Ukraine are largely armed, manned, and supported by Russia (in spite of Moscow’s denials) and the separatists’ “independence” may in the future even gain Moscow’s official recognition, if not lead on to annexation.

Russian imperialism is back with a vengeance. President Putin continues the legacy of Catherine the Great and Tsars by not only expanding Russia’s sphere of influence, but also by subduing neighboring states with the use of both soft and hard power. The recent political developments in countries like Ukraine, Georgia and Moldova serve us as a stern reminder that Russia’s structural and historical predilections still play a key role in its quest for reimperialization, and no country with a considerable ethnic Russian or Russian speaking population is safe from the modern form of creeping Russian imperialism.

Agnia Grigas is a nonresident Senior Fellow at the Atlantic Council and a Truman National Security Fellow. She is the author of Beyond Crimea: The New Russian Empire and The Politics of Energy and Memory between the Baltic States and Russia. Follow her @AgniaGrigas. 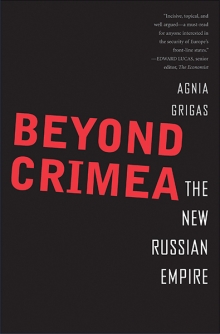