“I felt that I was in the military in the true sense because I dealt with those people.”

Every four years, presidential election cycles give Americans an opportunity to witness and to participate in sustained, often spectacular displays of civil religion. Campaign rallies, debates, and advertisements are shot through with myths, symbols, and rituals that express and encourage devotion to the United States. Candidates speak of founding principles, of economic opportunity, of national strength in the face of adversity. Supporters decorate themselves using a tri-color palette highlighted by stars and stripes. On the stump candidates offer jeremiads or promise the millennium. The true greatness of America, they say, is either slipping away or just around the corner.

We do well to pay close attention to these diverse expressions of civil religion, incessant and saccharine as they may be. Such performances offer meaningful clues about a candidate’s understanding of civil religious orthodoxy: which values, institutions, and people are truly American. We also do well to note the presence of the American soldier in these civil religious performances. The soldier—a compound of symbol and person, myth and story—plays a central role in American civil religion. He or she embodies the values of the nation and practices a widely revered form of devotion to it. In turn, a politician’s devotion to the soldier often functions as a civil religious litmus test indicating the strength of a candidate’s faith in America.

In electoral politics, devotion to the American soldier is something different from military service itself. As we saw in attacks on John McCain in 2000, Max Cleland in 2002, and John Kerry in 2004, actual experiences of soldiering are politically ambivalent. They are messy and liminal. More useful to a campaign than actual war wounds is the proper posture of admiration for the wounded. More valuable than a personal narrative of danger confronted and enemies vanquished is fluency in the mythology of American warfare. In a world of physical polish and message discipline, actual war experiences are irreducibly angular.

This time around there are no citations for bravery on which to dump mud. There aren’t even service records to examine, but the remaining candidates must still orient themselves positively toward the American soldier. The challenge in this for Democratic frontrunner Hillary Clinton is not only that soldiering and commanding and dying for one’s country are still heavily coded as male, it is also that she must continue to speak about her role in the quasi-military defeat in Benghazi, Libya. Would another Secretary of State have acted differently? Would a Republican appointee have seen in intelligence reports a developing threat and acted more decisively to counter it? Could the attack have been thwarted? Could those four lives have been saved? These questions matter, of course, but what may matter more in the long run is the civil religion problem that Benghazi creates for Secretary Clinton. By virtue of her experience, she bears the burden of a tragic event that has come to symbolize carelessness, indecision, and a breaking of faith with consulate staff and with those responsible for protecting them.

By contrast, Republican front-runner Donald Trump is free to imagine an unblemished relationship to the American soldier, free to express admiration for the military through his own internal mythology. As evidence of his devotion to the American soldier he offers his five years in a military-style school and the feeling that he was in the military “in the true sense.” The civil religious appeal of Trump’s imaginings has so far been strong. His performative masculinity projects the muscular leadership enshrined in some myths of American greatness. His support of a range of morally problematic tactics—from physical intimidation at rallies to torture of prisoners of war—seems calibrated to appeal to his imagined soldier—the one who shoots (and shoots and shoots) and asks questions later, maybe.

In December 2015, Time Magazine reported that Trump actually felt guilty for never having served in the military. During a New Hampshire campaign rally he acknowledged these feelings, but then reminded the audience that he had “built the Vietnam Memorial in New York.” For this act of devotion “the military” was very grateful. “To this day,” he proclaimed, “if I’m walking down the street, the military so often come up to me and they say, Mr. Trump, thank you for building the Vietnam Memorial.” He continued, “the military, they have unbelievable heart.”

Well, yes. Many soldiers do have heart and courage and determination. Some do not. And if there is a civil religious problem—which I believe that there is—with subsuming individual lives and bodies in the symbol of “the American soldier,” there is an even greater problem with generalizing soldiers one has met on the street or encountered in other arenas of one’s life into “the military.” Setting aside the mildly funny image of “the military” coming up to a person to offer thanks, one has to wonder how interested in human particularity a person can be if particular humans dissolve not into an embodied symbol, e.g. the soldier, but into an institution: “the military.”

This is an academic, humanistic concern, to be sure. But it should be a civic concern as well. Because unless I have misread Mr. Trump’s messages horribly, the “winning” that he wants America to do again will require soldiers to suffer and, quite possibly, to die. If those sufferings and deaths are to him institutional, not individual, they will also be far more acceptable than they ever should be. Here, again, Trump shows us a dark, troubling side of American civil religion. It can unite a diverse people and call them to action in service of their better angels. It can also obscure the realities of soldiering and efface the humanity of soldiers, encouraging citizens to see heavily mythologized victories apart from their moral complexity, and acts of “unbelievable heart” apart from the unbelievable hurt that so often attends them.

Jonathan H. Ebel is associate professor of religious studies at the University of Illinois at Urbana-Champaign and is a former naval intelligence officer. He is the author of Faith in the Fight: Religion and the American Soldier in the First World War and the co-editor, with John D. Carlson, of From Jeremiad to Jihad: Religion, Violence, and America. 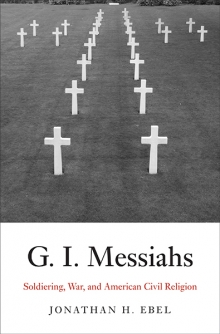