In 1801, the rulers of Tripoli, in today’s Libya, declared war on the US, after the republic had attacked North African corsairs who had repeatedly pirated American ships in the western Mediterranean. American politicians were not particularly worried about the impact of the Libyan threat on their republic, though Thomas Jefferson did meet a Libyan envoy to explain the American position. These historical eccentricities apart, America’s earliest real involvement in the Arab and Islamic worlds was neither militaristic nor political. In the second half of the nineteenth century, many American engineers, some veterans of the civil war, found opportunities to make their fortunes in helping Middle Eastern rulers, for example Egypt’s Khedive Ismail, modernize and industrialize their economies. By the turn of the century, American missionaries founded the region’s first modern universities: The Syrian Protestant College (which later became the American University in Beirut) and the American University in Cairo.

For many Arab and Muslim thinkers and politicians in the early decades of the twentieth century, America was the youthful emerging power of the West. Drawing on the resources of an entire rich continent, it appeared with immense potential. And, importantly unlike Britain and France, America was distant and seemed content with its isolation, having no interests in their parts of the world. Many Arabs and Muslims wanted more American attention.

The discovery of oil, on gigantic scales, in the Arabian Peninsula in the 1930s and 1940s gave them that attention. The meeting at the end of the Second World War, on an American warship in the Suez Canal in Egypt, between US President Franklin Delano Roosevelt and the founder of Saudi Arabia, King Abdelaziz al-Saud, transcended being the christening of an “oil for security” deal; it transformed America’s positioning in the Arab and Islamic worlds from a distant giant admired for its dignified and idealistic stances and colossal power into a key actor in their regions.

A love-hate relationship (at least from the Arab-Muslim side) began to take shape. America’s emergence in the second half of the twentieth century as the unrivalled leader of the West and the epitome example of its power, entrenched its positioning within Arab ruling classes as the “friend” to anchor one’s bets on. American entrepreneurialism, Hollywood-style depictions of its cities and lifestyles, easy-going social mannerisms, and its conservatism and religiosity, appealed to many in the Arab and Muslim middle classes. Americanization, from the proliferation of jeans to the aspiration of the upper classes to send their sons and daughters to American universities, was increasingly taking hold. Brand America was solid in most parts of the Arab and Islamic worlds.

But involvement meant the loss of detachment and the inevitable entanglement in regional and local politics. America’s increasingly close links to several regimes in the Arab and Islamic worlds (many of which had no democratic credentials and often held shocking political, civil, and human rights records) was slowly fraying its positioning in front of huge segments of Arab and Muslim societies. For many, America became the ally and often the protector of the oppressors; it became the new (and far more powerful) empire with major interests linked to those at the top as opposed to the ordinary people. This adverse positioning was exacerbated, in the minds of many Arabs, by America’s strategic connections to Israel, especially after Israel’s victory over the Arabs in the 1967 “Six Days War”.

The 1990s brought the prospect of more admiration and less antagonism. The end of the cold war, the dawn of a new “World Order” in which key problems such as the Israeli-Palestinian struggle, and later the peace treaty between Israel and Jordan, all signaled the promise of resuscitating America’s earlier positive image in these regions. The buoyancy and dynamism of the Clinton years, and the immense technological changes that dramatically exposed large sections of young Arabs and Muslims to the US, imbued brand America with renewed vitality and admiration.

America’s reactions to the hideous crimes of the attacks of September 11, 2001, shattered that promise. The giant power went for colossal displays of “shock and awe” that seemed, to major sections of Arabs and Muslims, to be the mass-revenge of a goliath that lacks clear objectives, strategy, and crucially, reflective leadership. And as these shows of shock and awe descended into quagmires, and as some US agencies behaved with none of the values and principles that had previously earned the US respect and admiration, America came across as confused, tired, and strategically and morally lost. When President Obama came to Cairo in 2009 to give an address intended to reset America’s relationship with the Arab and Islamic worlds, it seemed that the well-crafted words and the perfect delivery could not regain the colossal American strategic and moral losses of the previous decades, and especially of the early 2000s.

For their part, the Arab and Islamic worlds were not ready for a reset. Large parts of those worlds were on the brink of painful transformations. Old political structures were conspicuously bankrupt in terms of political legitimacy and their ability to lead, and no longer represented their societies. Most Arab economies were suffering acute inequality and many became cases studies of shocking forms of corruption and blur between power and wealth. Large sections of Arab and Muslim youth were clearly angry at the consequences of decades of failure, consequences that were shackling their potential and eroding their future. All of these factors meant that the Arab and Islamic worlds were on the verge of confronting challenging questions about political structures, legitimacy, frames of reference, the role of religion, and identity—questions that were suppressed for many decades, and that were suddenly coming to the fore. Amidst all of that, segments of Arabs and Muslims wanted to hang the failures they inherited on foreign conspiracies. And the US— with a long series of choices and actions—gave them a lot to chew on.

Leading figures in the Obama administration correctly assessed that the Arab and Islamic worlds’ problems are their own challenges, and that solutions to these dilemmas could only emerge from within these societies. Any foreign imposed or backed solutions are doomed to fail. This view looked, particularly at the Arab world, as undergoing a painful catharsis, in which foreign— including American— stances are of minor importance and impact. This view concluded that the US might gradually detach itself from those parts of the world, as its interests there are increasingly limited (especially as America moves towards full energy self-sufficiency). In this view, America’s key engagement in these parts is to monitor and remain vigilant to the dangers— such as militant Islamism—that have the potential to escape the quagmire of these lands and rise to threaten the world.

The problem with that argument is that the Arab and Islamic worlds are (apologies for the cliché) too big to fail. With over 1.6 billion people, two thirds of them are under forty years old (including one of the largest groups of youth on the planet), these worlds cannot be ignored. As much as many in the US prefer to engage with “succeeding” (as a senior American policy maker recently put it) rather than problematic regions, the US has no option but to engage in the Arab and Islamic worlds. The question that will confront the next American administration is: how—and for what objectives.

Military interventions proved their limitations and the disasters they give rise to. Alliances that have always triggered moral dilemmas have begun to crack once interests started to diverge. Mediation in fraught conflicts has limited (if any) return on energy and efforts. And so America needs a new positioning in the Arab and Islamic worlds, one that does not drag it into the region’s many quandaries, and yet one that retains for it the ability to not only be vigilant to the threats lurking in the region, but also to influence the potential outcomes of the transformation that this demographically rich region is currently undergoing.

Probably one of the most effective ways of doing that is for the US to rediscover its ability to inspire. It might want to focus its strategy in the Arab and Islamic worlds on the social and economic changes unfolding there. Huge middle classes are emerging in these parts of the world. Tens of millions of young Arabs and Muslims are increasingly exposed to the world in ways no previous Arab or Muslim generation experienced. The US need not dedicate major resources to support these rising groups. It need not look for political allies. It should not voice empty rhetoric that would not be followed by decisive action. It does not even need to understand the highly complicated and constantly changing social dynamics in these different pulsating societies. But the US could—especially given its new energy resources and its increasingly selective engagement—rise above the politics of the here and now and position itself as a stakeholder in the growth of these middle classes and in the entrenchment of political, civic, and human rights. A stakeholder does not necessarily have to support certain groups. But a serious one needs to be consistent and ideally principled. This might sound like fluffy talk incompatible with hard-nosed assessments and strategic considerations. But, on reflection, it could be the safest strategy concerning a region in the midst of a transformation out of which it will, almost certainly, appear vastly different—in terms of political and economic structures and social systems and norms. Amidst these major uncertainties, the US might need to bet on its true values. The US might be surprised that the best of what the Arab and Islamic worlds have to offer—the ones who could emerge victorious in this long, fraught, and painful transformation—might, themselves, rediscover the greatness that the US once stood for. In this case, the reset in the relationship will be a two way road and will have a real chance of success.

Tarek Osman is the author of “Islamism: What It Means for the Middle East and the World” (Yale, 2016) and the prescient and internationally best-selling “Egypt on the Brink” (Yale, 2010). He has appeared as a commentator on most major international news networks and is a regular contributor on the Arab world and Islamism for many leading newspapers and magazines worldwide. He wrote and presented the BBC documentary series ‘The Making of the Modern Arab World’ (2013) and ‘Sands of Time: A History of Saudi Arabia’ (2015), and is the political counsellor for the Arab world at the European Bank for Reconstruction and Development (EBRD).

In January (2016) he contributed to the Press’s London Blog with a post title ‘The Two Futures of the Arab World’. He also talked to Canada Broadcasting Corporation (CBC) in February on ‘Redrawing the Map of the Middle East‘. 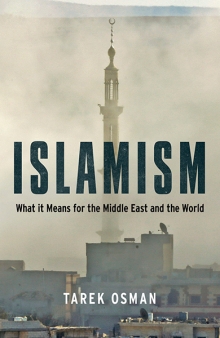