Chocolate eggs, simnel cake and a return to those things we have given up for Lent? There are resonances in all these to medieval foods. While there may have been no chocolate, Easter was marked in the countryside by the eggs the peasants brought to their lords, a typical customary rent in kind – and the lord frequently reciprocated with a feast for his servants on Easter day. This was one of the three great holiday periods in the medieval year, along with Christmas and Whitsun. Simnel loaves were the finest of breads; the monks of St Augustine’s, Canterbury, expected them on the greatest of the feast days, along with mead, as a special celebration. To medieval men, Easter marked a transformation in their diet, with the return of meat to the table.

The customs of Christianity shaped food consumption. Late medieval Europe practiced a regime of abstinence from flesh – which was held to provoke lust and gluttony – on set days of the week, typically Friday, but in England also on Wednesdays and Saturdays. Beyond these days, there were three seasons in the year which were marked by further food abstinence: Lent, Advent and Pentecost. Lent was the most widely observed and during this period neither meat nor dairy products (called by St Jerome ‘molten flesh’) were to be eaten. For those that could afford it, the foodstuff that took the place of meat was fish. Meat was missed, not only in terms of calories, but in the types of foods that came to table, and elite cookbooks attempted to mitigate the absence by providing Lenten versions of meat and dairy recipes. ‘Viaunde Cypre’ – a dish of ground chicken or pork, with almond milk and spices, especially sugar, stiffened with rice flour – had an analogue for Lent, with ground crab meat and salmon, along with pomegranates.

The events of Christ’s life in the week leading up to Easter found their echo in medieval food customs. Maundy Thursday, the occasion of the Last Supper, was marked by almsgiving on a wide scale, often using special foods for the poor, such as barley bread. Good Friday was the one day in the year on which most people came close to fasting, abstaining from all food except bread and drink – although this was the day on which the poor might receive food that was out of the ordinary. In East Anglia, Dame Katherine de Norwich, the widow of an Exchequer official, fed 13 poor each day in her household: on Good Friday 1337 the poor in her household had wastel bread – one of the finest breads.

Easter Day marked the return of the meat diet. For some, it could not come too soon. At Nettleham, just outside Lincoln, in the late fourteenth century, the rector provided eggs and bacon (collops, slices of ham) for his parishioners before Mass that day, to the consternation of his bishop: the convention was that food was not to be eaten until after the first Mass of the day had been said. There were in addition some special foods in elite households. A lamb – pointedly recalling the resurrection of Christ, the lamb of God – featured on the tables of bishops on Easter Day (there is a shift, here, in food terms – lamb was Passover food, that is, what Christ had probably eaten at the Last Supper; illuminations of this meal in medieval prayer books, however, have Lenten fare – fish – on the table). The feast held by Richard Mitford, Bishop of Salisbury, at Easter 1407 – Sunday 27 March, like this year – included two lambs. These were ‘top table’ food: there were more than 80 people present, and there was in addition venison, veal and beef, pigs and piglets, as well as 20 capons and 48 young chickens (poussins). More than 500 eggs were consumed in the day’s food preparations. While the lamb might reflect the new availability of meat (and the ability to eat it after Lent), it also echoed a wider tradition in Western Christendom. Popes had distributed roast lamb at this time in the ninth century; but by the thirteenth century it had been replaced by a wax lamb, with the pope’s name impressed on it. The tradition of eating lamb was also more widely observed: Dame Katherine de Norwich had a lamb on Easter Day 1337.

What about the experience of eating this food? The lamb was almost certainly roasted: medieval cookbooks have little in the way of separate recipes for lamb, but roasting was a prestigious way of presenting meats at table. Much of medieval elite cuisine embraced display as key component in what went on at table. Roast meats were carved in front of the lord or lady of the house, in elaborate routines. Fifteenth-century instructions permit the carver to lay his left hand on joints of beef or mutton when carving (venison was not to be touched by hand at all). A key element in the late medieval meal were the sauces that were to be served with meats. Great emphasis was laid on their preparation: a cook’s ability to make sauces made him highly prized. There were also specialist saucerers: the English royal household had a special department, the saucery, from at least the thirteenth century. Servants were expected to know which sauces went best with each meat and which suited the lord’s taste. Mustard was held to go well with beef or powdered mutton – that is either lightly salted or dusted with spices. Ginger sauce was recommended for lamb. And if we turn to the accounts of Dame Katherine de Norwich’s household we find purchases for Easter of both mustard and ginger. The great cookbook written for Richard II of England, The Forme of Cury, tells us that ginger sauce was made with vinegar, salt and powdered ginger, with ground breadcrumbs to thicken it. These sauces came to table in separate dishes ‒ saucers. These sharp, acidic and spiced sauces were one of the hallmarks of medieval elite cuisine across Europe. The Easter holiday was an exceptional occasion not only for the celebration of Christ’s resurrection, but also for the enjoyment of food.

C. M. Woolgar is professor of history and archival studies at the University of Southampton and editor of the Journal of Medieval History. He lives in Hampshire, UK. 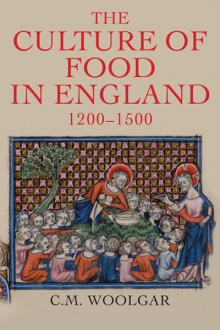