Over the past few years there has been a growing sense of crisis in American criminal justice–a sense on both the right and the left that our punishment practices have spun out of control.  The Koch brothers have been collaborating with the Obama administration in the effort to find some way of cutting back on American criminal punishment, which is by far the harshest in the advanced economic world.  (We incarcerate so many people that our rates cannot even be displayed on the same chart with the rates of other countries.)  The President has been making highly publicized use of his clemency power, while some judges are struggling to invent new means of showing mercy to defendants.  Maybe the rise of the politics of Trump will change things, and push us back down the road of unbridled harshness; but for the moment people on both sides of the political divide seem to be feeling the same queasiness about the shape of criminal justice in our country.

Could it be that our common law tradition is part of the problem?  We are deeply committed the common law, with its presumption of innocence and its centuries-old reliance on jury trial.  We all think of the common law as fundamental to nature of American liberty–to everything that ought to make our country a beacon of justice; and most Americans take it for granted that justice is much safer here at home than it is anywhere else in the world.  But what if our deep commitment to our inherited way of doing justice is contributing to the fearsome harshness of American criminal justice, which represents such a stain on our national experiment in democracy?

A number of legal scholars have suggested exactly that.  The most common suggestions have to do with the “due process revolution” engineered by the Warren Court in the 1960s, which translated our common law traditions into a body of constitutional rights.  How could expanding defendant rights have done anything but good?  Critics make two arguments.  One is that the due process revolution made it so difficult and costly to stage criminal trials that the very institution of criminal trial has come close to vanishing.  Today around 95% of cases are resolved by plea bargain–and our cherished traditions of common law rights have little bearing on how plea bargaining is conducted.  Thus the due process revolution, instead of protecting defendants, drove criminal prosecution out of open court and into the shadows.  The second argument is that the due process revolution stirred a political backlash.  It was easy to accuse the Warren Court of “coddling criminals,” and politicians seized on the opportunity to pass ever more draconian tough-on-crime statutes.

The critics of the due process revolution, painful though it is to admit it, may be right–and there may be other dangers lurking in our common law tradition as well.  Our tradition of the presumption of innocence, founded in the “beyond a reasonable doubt” standard of proof, is especially fundamental to our understanding of American liberty.  But strange though it may sound, there is a case to be made against it.  Our culture of the presumption of innocence rests on the proposition that the gravest form of injustice is the conviction of the innocent, and so our criminal procedure is designed to keep the innocent safe.  But if our system works overtime to protect the innocent (at least on the rare occasions when we hold a trial), it offers virtually no protections for the guilty.  Guilty persons in America, by contrast with other parts of the world, are deprived of almost all rights–cast out from society, and often subjected to bestial treatment in our prisons.  Other societies are different.  They focus much more on rights for the guilty:  They have something that might be called a “presumption of mercy.”  Perhaps having a presumption of mercy is as important, or even more important, than having a presumption of innocence.

The answer is that “beyond a reasonable doubt” was not originally a legal formula at all.  It is a formula that comes from moral theology.  And its original purpose was not to protect the defendant, but to protect the jurors against damnation.  Christian jurors were fearful that they themselves would be damned if they voted to convict an innocent person, and the “reasonable doubt” formula was intended to reassure them that they send a defendant to the gallows without endangering their own souls as long as their doubts were not “reasonable.”  The purpose of the rule was not to put obstacles in the way of conviction, but to encourage conviction.

That is a story that raises yet further questions about our common law tradition.  In its original form, the “reasonable doubt” formula was well-crafted to help jurors overcome their qualms about voting for conviction.  Yet it is not well-crafted at all as a formula guiding jurors in their fact-finding.  After all, there are always some doubts.  When are doubts “reasonable”?  There is no good answer to that question, and the result is that our juries are being asked to convict without being offered basic, and morally essential, guidance.  That should make all of us uneasy. 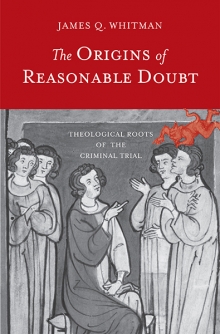