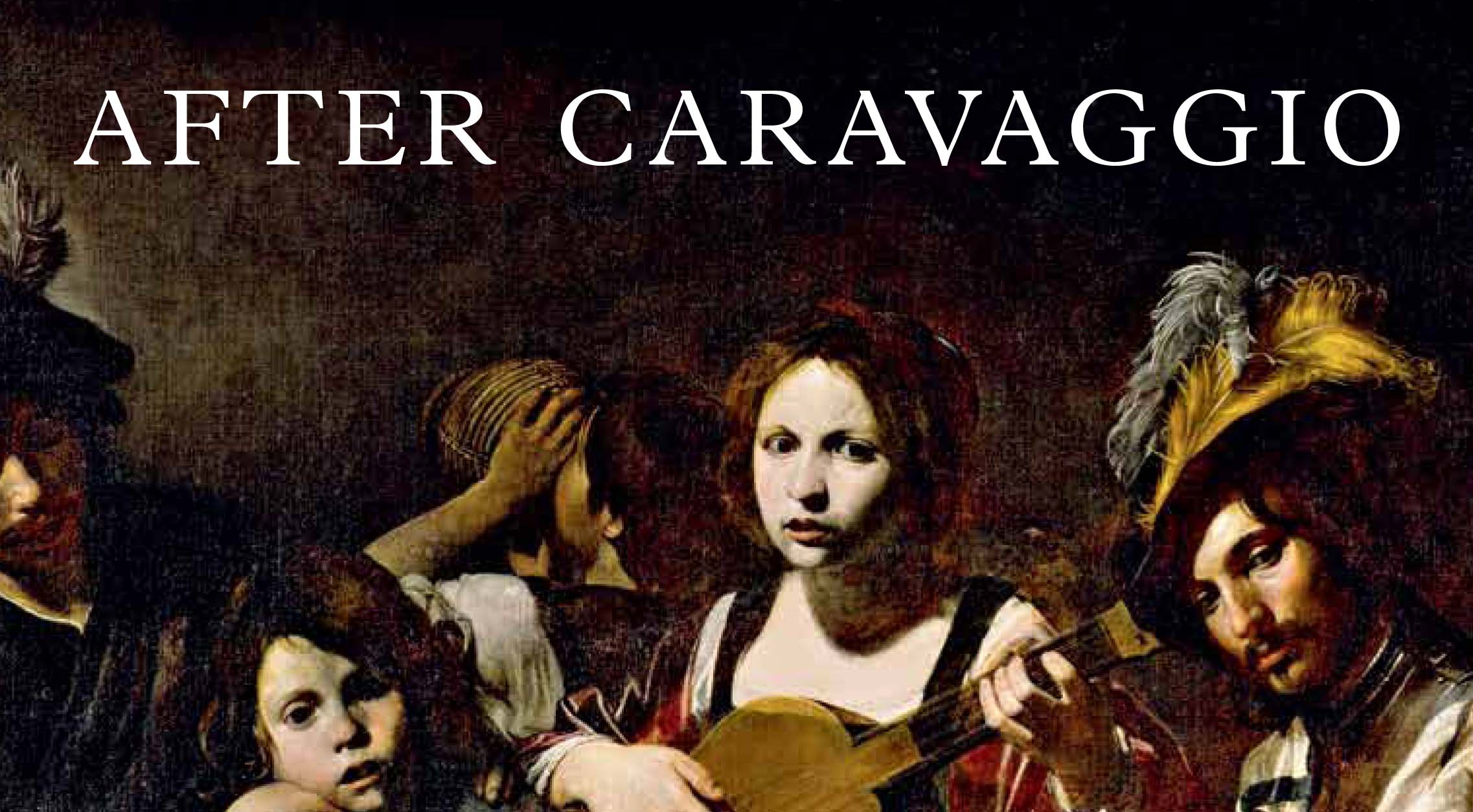 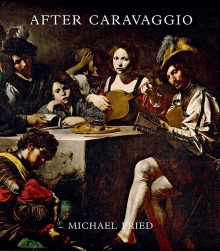 This summer, we’re delighted to publish a new book by the esteemed art critic and historian Michael Fried.  The beautifully illustrated new book, After Caravaggio, combines an accessible account of works by Bartolomeo Manfredi, Valentin de Boulogne, Nicolas Tournier, Nicolas Régnier, and a young Jusepe de Ribera with a detailed case study of Cecco del Caravaggio’s Resurrection (1619–20), and concludes by surveying a group of paintings by Guercino, a painter not counted among the Caravaggisti, but whose strategies in relation to the viewer aligned him with their interests.

Let me begin by looking briefly at Valentin de Boulogne’s Fortune Teller (1620s) in the Louvre, a representative work by the artist and a representative example of a certain sort of Caravaggesque painting. 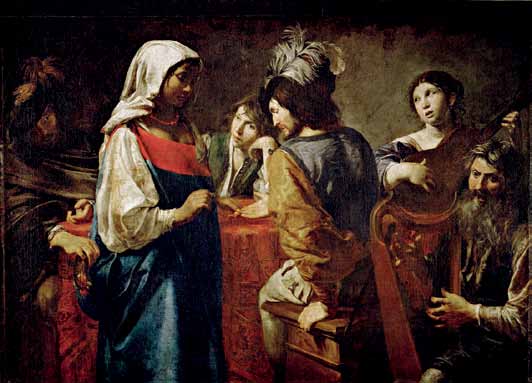 I want to use Valentin’s canvas as an initial and recurrent point of reference for a series of remarks about what I take to be a distinctive Caravaggesque pictorial “system” or, perhaps more accurately, pictorial poetics, one which I suggest possesses an internal consistency and rationale such as have never, to my mind, been fully acknowledged. To launch right in: Valentin’s canvas, slightly under five feet high by slightly over five and a half feet wide, depicts in a naturalistic manner derived from post-1600 Caravaggio, which is to say in a style based at once on strong local color and powerful chiaroscuro, six figures (four men, two women) in a shadowy but otherwise unspecified interior space. The central figures are a standing young woman – by her red and blue dress and dark coloring, as well as by her actions, a gypsy – who is engaged in telling the fortune – reading the palm – of a seated young man in expensive clothes and a feathered hat. (The expensive clothes matter: the viewer is clearly intended to note the fine-textured mastery with which the painter has rendered the seated man’s yellow-ocher damask sleeve, as well as the pattern on his black jerkin.)  At the right, a young woman plays a guitar while a seated older man with an unruly gray beard and piercing eyes plays a smallish harp.  The harpist appears to be singing and the young woman may be doing so as well.  Neither looks at the two principal figures or toward the viewer standing before the painting. Instead the young woman gazes off into space toward her right (our left), and the bearded man gazes abstractly albeit intensely before him, as if lost in the music. Between the two principal figures and a few feet beyond them a boy sits at a table covered with an oriental carpet, his left elbow resting on the table as he supports his head with the back of his left hand; he seems to be looking at the gypsy but it is possible that he too is lost in thought or even that he is gazing off somewhat indeterminately. At the left, behind the gypsy a character in a dark cloak and hat, almost wholly in shadow – a bit of light touches the crown of his hat – carefully extracts (that is to say steals) a chicken from the pocket or sack at her side. (A similar action occurs in Valentin’s Fortune Teller with Soldiers (ca. 1620), with the added detail of the man picking the gypsy’s pocket enjoining the viewer to silence with his left hand. In addition, a young boy looking off to the left either aids the thief or is lifting his purse, it is impossible to be certain which. Thievery of this sort is a staple of other paintings in this genre, such as Simon Vouet’s Fortune Teller (1620).  The depicted space is shallow and all the figures appear to be situated in close proximity to the picture-plane, including the boy: the table under its rug has almost no depth.

So much seems plain. What is not so plain is whether or not art historians, with a few rare exceptions, have yet taken Valentin’s Fortune Teller and other paintings like it with full critical and intellectual seriousness.  What I mean is this. It is true that Valentin is today widely recognized as a painter of impressive achievement, a superb colorist and wielder of the brush, one of the key figures in Roman Caravaggism.  At the same time, there has been a widespread tendency to misconstrue, and in effect somewhat to caricature, the specific aims and ambitions of paintings such as this one. The subject is inevitably regarded as hackneyed (not just the theme of fortunetelling but also the related themes of card playing, music making, and pocket picking); no strong narrative or dramatic thread binds the various characters together, and each personage conveys the sense of having been drawn from a common repertoire of stock figures of a popular sort. As Helen Langdon in particular has demonstrated, the great source work for these pictorially speaking was Caravaggio’s
Cardsharps (and to a lesser degree his two Fortune Teller canvases and in a different register the Calling of Saint Matthew in San Luigi dei Francesi), along with a large later sixteenth- and early seventeenth-century popular literature featuring card players, bravi, prostitutes, and similar types. = She writes: “The spell cast by Caravaggio’s Cardsharps intersected with the growing popularity of the picaresque novel, and art and literature united to produce a genre which, between 1599 and 1620 [a somewhat early closing date, I think], spread, with astonishing uniformity, throughout Europe”. In painting “[t]he first to establish a vogue for this kind of subject matter was Bartolomeo Manfredi. . . . His Cardplayers (1618), with its opening up of the game to the spectator, and the players so close to the frontal plane, is indebted to Caravaggio’s early genre paintings, but it has lost their bright light, and the figures, wrapped in darkness, are lifted from the master’s Calling of Saint Matthew and Martyrdom of Saint Matthew in San Luigi dei Francesi. . . . Manfredi, and a group of painters around him, built up a repertory of figures that they used over and over again in increasingly complex compositions”. As for Valentin, Langdon sees that he characteristically depicted “a darker, more realistic underworld,” evoking, in a painting like Soldiers Playing Cards and Dice (ca. 1618–20),

the atmosphere of the dark taverns of Rome, where the threat of violence was constant, and where so many bravi and unoccupied soldiers, decked out in odd bits of armor, looked for wine, women, and adventure and played cards and dice. His figures – the dupe in elegant but bedraggled dress; the cheat, his poker face stiffly expressionless; the dice players, grimy, drunkenly flushed, and clad in scanty tatters – are the mournful cast of a gloomy tavern scene, close in spirit to the descriptions in contemporary picaresque novels. Valentin’s later tavern scenes continue to evoke a picaresque habitat . . . and, increasingly melancholy, sugggest the transitoriness of earthly pleasures. In the years around 1620 there developed a craze for such scenes, by such artists as Simon Vouet, Nicolas Régnier, Leonello Spada, and Nicolas Tournier… until, in the late 1620s, the motif began to pall.

All this is true as far as it goes – though the notion that tavern scenes began to “pall” in the late 1620s, putting an end to the “craze,” is a bit unnuanced.  But nothing is more striking, when one surveys the Caravaggesque corpus, than the recurrence in painting after painting of the same handful of characters, wearing similar costumes (young gypsy women invariably in red, blue, and white), engaged in the same limited range of activities. In fact the same models can be recognized from one painting to another.  But what such an emphasis turns out to ignore is another range of typical features and characteristics, one that has an altogether different sort of significance – an essentially pictorial significance, if I may so put it.

I want to emphasize such a painting’s status as what, along with others, I have been calling a gallery picture – that is, a framed canvas of limited dimensions painted for wealthy and important collectors to hang in exhibition spaces in their homes and palaces, where they were made available to friends and visitors under conditions which at the time would have been regarded as ideal.  Such a picture, therefore, could count on being looked at closely by men of taste who prided themselves on being able to discern artistic quality; but precisely because that was the case, it was also faced with the need to establish by virtue of its forcefulness or refinement – ideally, both – a distinctive and authoritative “presence” on the gallery wall. At least as far as Rome was concerned, I understand this as a recent development. It also marked a difference from the norms of the High Renaissance, the greatest Roman monuments of which were fresco projects on the walls and ceilings of important buildings (Raphael’s Stanze and Farnesina decorations and Michelangelo’s Sistine Chapel being epitomes of this). The decline of the art of painting in Rome and other central Italian cities as the sixteenth century wore on largely involved the failure of decorative painting in fresco to match or even to approach the artistic standards set by the earlier masters.

This did not mean that the emergence of the late sixteenth- and early seventeenth-century gallery picture was not in its own way fraught with difficulties, the key issue it had continually to resolve being whether oil paintings of limited dimensions, more often than not depicting figures not shown in their full height, could possibly rival in force or importance – in pictorial authority – the earlier canonical achievements by arguably the greatest painters who had ever lived. Gallery pictures, moreover, unlike the famous High Renaissance altarpieces by Fra Bartolommeo, Raphael, Andrea del Sarto, Correggio, Bellini, Titian, and others, no longer had the support of a traditional religious setting; rather, even when the subject matter was religious, their conditions of viewing were essentially secular, as they competed for admiration in wealthy and sophisticated men’s spaces with paintings by other masters who were just as favorably exhibited and illuminated. The key figure in this development was Caravaggio, and crucial aspects of his art, including his predilection for scenes of violence and its aftermath – notably for scenes of decapitation and its sequel – are ultimately to be understood in this light, in the first place as seeking to stop and transfix the viewer by virtue of the extremity of both subject matter and pictorial effect, and in the second as thematizing the sort of effort that was required to cut (as I put it) the gallery picture free of its surroundings, that is, to establish it in its aesthetic autonomy as a self-sufficient whole.

Michael Fried is J. R. Herbert Boone Professor of Humanities and the History of Art, Johns Hopkins University.  His other recent books include Another Light: Jacques-Louis David to Thomas Demand, Flaubert’s “Gueuloir”: On “Madame Bovary” and “Salammbô”, Four Honest Outlaws: Sala, Ray, Marioni, Gordon, and Why Photography Matters as Art as Never Before.

Here on the blog is a terrific interview between Michael Fried and David Ebony, on the occasion of the publication of Another Light.