Nearly half a century ago I was drawn to the recording of wild soundscapes because they connected me to the natural world in ways that imparted a sense of comfort along with a feeling of physical and spiritual empowerment. In those moments, sitting quietly listening to the dawn and evening choruses of deserts, tropical rainforests, or high elevation mountain streams, everything seemed possible. Mostly, the experience helped stem the raging effects of the ADHD I’ve suffered since I was a child.

I had no idea, then, nor until very recently, that this avocation–one that has given me such joy—would eventually become a dedicated field of study all its own, one called soundscape ecology (aka ecoacoustics)–the study of sound in the landscape. Over the course of the past decade, the discipline has revealed many surprises. For example, it became clear that the field recordings I and a few other colleagues had made and carefully archived, represented the foundation of a notable library—a compendium perhaps as important in its own right as the legendary collection in Alexandria. Of the biophonies I’ve captured and documented over the past fifty years, well over half arise from environments so thoroughly transformed by human endeavor that many are now acoustically unrecognizable or altogether silent. The impact of these changes is astonishing.

The recorded acoustic signatures of wild habitats serve as an important window into our acoustic past, leaving us haunted by the impressions of the voices associated with those once-vibrant biomes. Yet, we cannot lose sight of the fact that the remaining biophonies inform multiple disciplines with impressive insights. They include music, medicine, education, religion, natural history, environmental studies, philosophy, literature, physics (acoustics), architecture, paleontology, anthropology, politics, zoology, and even business.

Wild soundscapes in general, and biophonies, in particular, represent the voice of the natural world, a concept we are quite late in recognizing since we are primarily a visual culture. In Europe these ideas are taken seriously and explored widely. Yet not one academic institution in North America has a single department dedicated specifically to the study of wild soundscapes. In fact, while many outstanding institutions have environmental studies programs, none has managed to incorporate the wealth of information provided by sounds of the natural world. In order to accomplish that, the program would need a comprehensive archive to draw upon, one recorded in a calibrated manner, derived from many sites over long period of time. And that data is rare, indeed. Even more rare in academia.

Still, I wonder, how can one hope to understand much about ecology while, at the same time, being completely deaf to its voices? The breadth of most environmental programs has been limited to what we can see or touch–the contradictory equivalent to the sole study of silent movies in a contemporary master film class. Even with the few courses or workshops that do exist, the typical focus has been on the abstraction and deconstruction of natural world soundscapes into their incoherent parts by collecting the individual voices of organisms one by one and taking them completely out of context–an obsolete and distorted paradigm that has been in place for nearly a century. Although newer study models posit that we can learn what is occurring bioacoustically by collecting thousands of hours of fragmented data with remote, unattended recording, and then processing the files automatically, these paradigms haven’t proven to be as robust or informative as initially hoped. From the latter model it is assumed that we can achieve some understanding of the operational process of wild soundscapes. However, natural world organisms do not express themselves through that type of time-based fragmentation. If we want to understand that special narrative, we must learn to listen, monitor and study biophony—the sound produced collectively by all signal-generating organisms in a given habitat—as it is presented to us holistically, coherently, and over the broad temporal arc of its own revelation. To do otherwise is like attempting to grasp of the magnificence of Mahler’s 6th Symphony by abstracting the voice of a single violin player out of the context of the orchestra and hearing just that one part, or hearing just a few randomly selected bars from each of its four movements.

Over a decade ago, we made it our mission to better explain soundscape phenomena. Beginning with new descriptive language, I and another colleague divided the soundscape concept into its three basic sources: the biophony; the geophony—non-biological natural sounds that occur in a given habitat; and, last, the anthropophony—human-generated sound. I also developed the idea of the acoustic niche hypothesis (ANH), a concept that addresses the ways in which individual species find unimpeded acoustic or temporal bandwidth in which to convey their signatures within different biomes. Context is everything.

Jumping ahead several steps, once we have well-recorded field data in hand and have targeted, for example, the profound effects of global warming as expressed through the biophony, we can then utilize that model for assessing other bio- or geoacoustic conditions within a habitat. This is especially true if the same habitat has been recorded to strict protocol over an extended period of time (say, 20 or more years). Powerful and important messages lie within these narratives. Once we begin to decipher the meanings, how do we project that knowledge beyond the lip of an academic stage so that the audience members get it?

A central element in both science and most expressive formats in the humanities is creativity. Nothing original in science occurs without the creative inspiration to drive it. For example, in order to originate an investigative approach to a problem and then to construct quantitative models to express our findings, we must employ both resourcefulness and innovation, activities fundamental to output in the arts.

Communicating our findings so that the broader public can understand our work has been a harrowing minefield–debated across various media, but still largely unresolved. On the one hand, scientists in many fields have traditionally been weary of reaching beyond the conventional boundaries of peer-reviewed publications and sanctioned meetings. On the other, those few of us who have strayed outside of rigid academic margins into areas expressed through the humanities, have had to run the gamut of rejection, derision, devaluation of our work, or even outright dismissal for the appearance of our audacity. But we are in excellent company. The risk-takers include Charles Darwin, Rachel Carson, E. O. Wilson, Loren Eiseley, Jane Goodall, James Hansen, Stephen Jay Gould, Isaac Asimov, Neil deGrasse Tyson, Temple Grandin, and Roger Payne, and others. However, if we feel that our work is important enough and worthy of our energies, and if we wish to imbue the next generation with a sense of that value, than we need to invest in new ways to reach wider audiences.

About 10 years ago, I initiated an interdisciplinary component which I added to my ideally envisioned soundscape ecology department. In the proposed Center for Soundscape Studies, I explore a mixture of the arts and sciences where, for example, a composer might incorporate entire biophonies into a musical score, using them as a component of the orchestration, just as we did when we lived more closely connected with the natural world. Or I collaborate with a medical researcher to devise a double-blind study to test the efficacy of certain natural soundscapes as alternatives to pain medication, stress relief, or to improve hospital environments, the bioacoustic version of Shinrin Yoku, the Japanese healing method of forest bathing.

After the publication of my book, The Great Animal Orchestra: Finding the Origins of Music in the World’s Wild Places, (Little Brown, 2012), and since no one had taken up the challenge, I wrote a symphony with composer, Richard Blackford (former Balliol College Oxford University composer-in-residence). Commissioned by the BBC National Orchestra of Wales and titled The Great Animal Orchestra Symphony for Orchestra and Wild Soundscapes, it was the first of its kind to feature entire biophonies as core musical and structural themes. A year later Blackford and I wrote the score for a ballet commissioned by the Alonzo King LINES Ballet, an international corps based in San Francisco. We did this precisely to convey messages of profound beauty, change, and peril in expanded cultural vocabularies, concepts we could not otherwise quantify and publish in Nature.

Now, we have not only a new discipline, but the means of cultural expression through which to impart those discoveries. Biophonies provide powerful lenses through which to deliver the additional boost we need to navigate and comprehend the gaps and unanswered questions found in the broader topics of environmental studies. Which institution will be the first to implement these major programs?

Bernie Krause is a soundscape ecologist, musician, and author. He and the British composer Richard Blackford collaborated on The Great Animal Orchestra: Symphony for Orchestra and Wild Soundscapes, and composed the score for the Alonzo King LINES Ballet ensemble’s Biophony. He lives in Glen Ellen, CA. 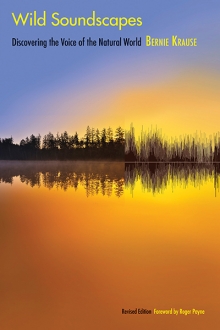