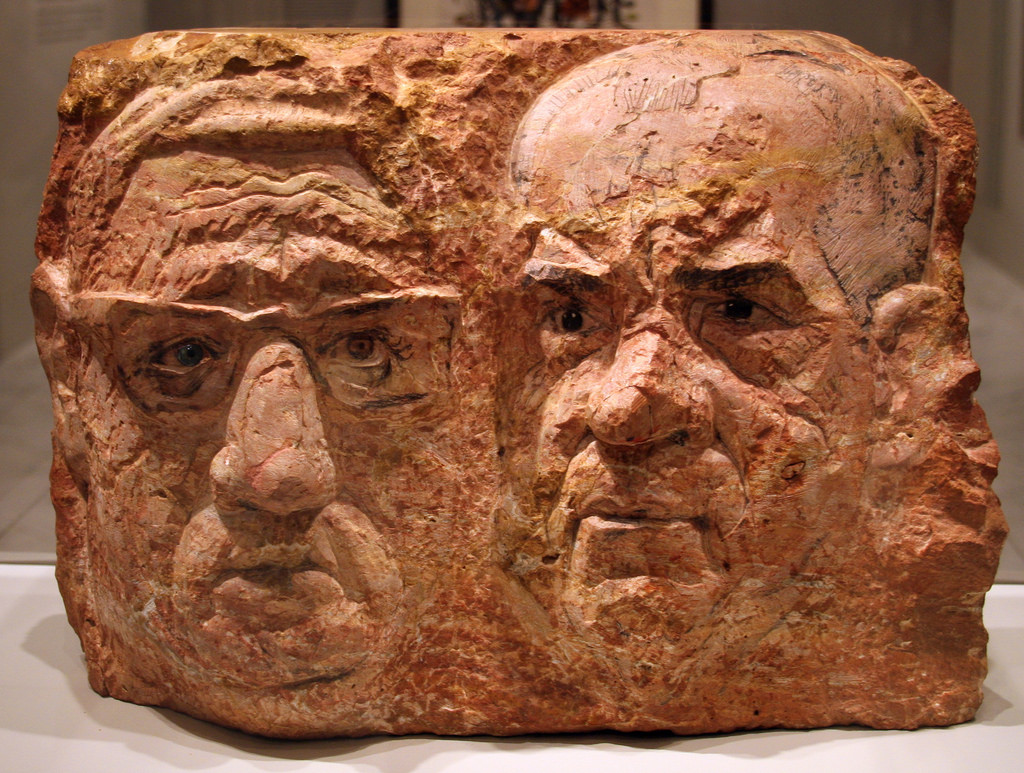 Image above is a sculpture of Henry Kissinger and Richard Nixon by Marisol Escobal, used with permission.

As we continue to mourn the passing of one of the 20th century’s great visual artists (as many other people are doing, as well — see this recent piece in the Spectator), we revisited this terrific blog post from late summer, 2014.

The life and work of Maria Sol Escobar, better known as Marisol, ought to be familiar to everyone. During the 1960s, and through the mid ’70s, she was arguably the best-known female contemporary artist in the U.S., if not the world. In more recent decades, however, her work has been infrequently shown, and she slipped into relative obscurity. Early on in her career, she was renowned for a distinctive style of figurative sculpture and drawing, often incorporating painting, drawing and sometimes photographs in her large-scale assemblages and carved-wood compositions. She began to show her work in the mid-1950s, and landed her first solo exhibition at New York’s prestigious Leo Castelli Gallery in 1957, when she was just 27. The quirky and colorful sculptures she presented in subsequent 1960s exhibitions at Stable Gallery and Sidney Janis Gallery in New York caused something of a sensation, and art audiences lined up to see them. Critics connected her work to that of the avant-garde Pop artists, who by the mid-1960s dominated the art scene.

The association with Pop art, however, led to some serious misunderstandings about Marisol’s work. Although her use of found objects and brash colors bear a superficial relationship to Pop, her work was not centered on mass culture and consumerism like that of most Pop artists. Instead, she was always more interested in presenting a personal, introspective study of identity—particularly her own—gender roles, realms of political power, and social inequity. Further complicating public perception of her work, Marisol was a fixture on the New York social scene. Her late-night carousing in the 1960s, with chums like Andy Warhol, gave her something of a party-girl reputation. In addition, her extraordinarily good looks attracted the paparazzi of the day whenever she appeared in public. Her comings and goings were routinely noted in the society pages of the local newspapers, and she was extensively profiled as a glamorous artist-fashion plate in national magazines such as Life and Harper’s Bazaar.

Born in Paris, in 1930, into a well-heeled Venezuelan family with major holdings in oil and real estate, Marisol led a peripatetic lifestyle from an early age, traveling frequently to Caracas, the U.S., and throughout Europe. Her parents frequently took her to museums, and she began making art very early on. At age eleven, her ostensibly idyllic childhood was abruptly upended when her mother died suddenly, an apparent suicide. Thereafter, Marisol grew extremely withdrawn and vowed never to speak again. “I really didn’t talk for years,” she stated in a 1970s interview, “except where it was absolutely necessary in school and on the street… I was into my late twenties before I started to talk again—and silence had become such a habit that I really had nothing to say to anybody.”

During the course of her career, her cryptic and guarded responses to queries fueled her legend as an aloof and unapproachable diva. Despite her many public appearances and her bohemian lifestyle, Marisol was, in fact, basically a loner. She was devoted to her work, and few people were allowed into her inner circle of friends. While she had a sequence of love affairs, she never partnered for a significant length of time and never married.

As the years went on, and her art-stardom faded, Marisol became increasingly reclusive, and her reputation for being silent and detached grew. For that reason, it was not without some trepidation that I went to meet her at her New York studio in 2003, invited by my friend, curator Gerard McCarthy, who was planning to include a work by Marisol in an upcoming gallery exhibition. Needless to say, it was an unforgettable studio visit. Marisol, much to our surprise, was totally charming. Getting on in years, but still retaining her good looks and sense of humor, she was quite friendly. And, though soft-spoken and hardly verbose, she shared many illuminating thoughts about her works that were crowded helter-skelter into her spacious loft. Most of them were sculptures from her two unsuccessful exhibitions at Marlborough Gallery in 1998 and 2001. Many of these rough-hewn wood carvings in various sizes and configurations depict Native Americans, primarily based on images appropriated from historic photo portraits of native tribal members taken by Edward S. Curtis in the early 1900s.

Marisol produced these works, which are rather dark and forlorn (Horace Poolaw, 1993, for example), as a tribute to those who have been disenfranchised by America’s expansionist policies and unbridled economic development. She also remarked on her attempt to imbue each piece with a talismanic quality, in keeping with Native American spiritual beliefs and practices. But collectors and critics shunned her efforts. She bemoaned the fact that the works had been poorly received and misunderstood. She was well aware that by that time, late in her career, she herself had been marginalized by the commercially viable and thriving art-world establishment that in the 1960s she had helped to create.
Today, at 84, Marisol is in frail health and no longer produces art. Her work, though, is currently receiving renewed art-world attention. A major Marisol survey, organized by Marina Pacini, chief curator of the Memphis Brooks Museum of Art, Memphis, Tenn., constitutes an important reassessment of her achievement. On view at the Brooks through Sept. 7, 2014, the exhibition appears in a slightly altered form at New York’s El Museo del Barrio, Oct. 8, 2014–Jan. 10, 2015. The show’s accompanying catalogue, profusely illustrated and containing in-depth essays by Pacini as well as curators and critics Deborah Cullen, Bill Anthes, Dore Ashton and Douglas Dreishpoon, goes a long way to reinstate Marisol to her proper, lofty position in contemporary art history. I recently met in New York with Dreishpoon, chief curator emeritus at the Albright Knox Art Gallery, to discuss Marisol and her legacy.

David Ebony: What drew you to Marisol’s work?

Douglas Dreishpoon: There’s a strong connection to the Albright Knox. Seymour Knox bought two works from Marisol’s first shows at the Stable Gallery [1962 and 1964], now in the museum’s collection: Baby Girl (1963) and The Generals (1961–62). There’s a great archival photo of her from the time she came to the museum in the ’60s to touch up The Generals. She’s looking very glamorous as she’s repainting a detail on the sculpture. Marisol’s such an interesting character. She was able to morph in the way of a chameleon. She straddled multiple worlds—from high society to downtown bohemia.

For me, one of the most fascinating parts of her biography is her relationship early on with de Kooning. He was her lover for a time. She was very young when she came to New York—eighteen or nineteen. She found her way to the Cedar Tavern, where she met the Abstract Expressionists, including de Kooning. She quickly adapted to the bohemian lifestyle. Having had an over-protected, privileged background, it was a liberating experience for her. She smoked lots of pot at the time. They’d go to the Five Spot to hear jazz after hours; they’d hear David Amram’s quartet, for instance. It was a place to meet people, to fall in love. There was a confluence between music and visual art at the Five Spot; it was kind of the Ab Ex equivalent of CBGB and the punk movement.

Ebony: In your essay you quote Gloria Steinem as saying that “Marisol is a classic example of a nonverbal artist: life goes on, for her, in the visual, and words mean very little.”

Dreishpoon: For a long time, Marisol was regarded as the Garbo of the art world—inaccessible and an enigma. She tended to present silence as her first face. Some thought she was quiet or taciturn because she used silence as a way to garner attention. But others who knew her said she could be charming and talkative. You have to consider the trauma of her childhood. Her mother committed suicide when Marisol was just eleven. Her circumstances were dire. She was silent for four or five years after. She completely shut down psychically and emotionally. Her silence is totally understandable; it wasn’t something she fabricated.

Ebony: Things seemed to change in the late ’60s. At the height of her fame, she seems to have disappeared from the art scene for a time. She left New York and traveled around the world. Her career seemed to have lost momentum. Do you think that absence hurt her?

Dreishpoon: The art world had changed drastically by the early 1970s. It got more commercial. Warhol claimed that good business was the best art, but art-world commercialism was an anathema for Marisol. The year 1968 was pivotal. When Warhol got shot that year, it affected her deeply. It may have been one of the reasons why she decided to leave New York. As a foreigner, she always saw things differently, and she was a peripatetic person in any case. To leave the city periodically was very natural to her. I think that traveling actually enriched her work.

Ebony: Sometimes Marisol’s persona and her incredible biography get in the way of the work. You say in your essay that from early on her notion of sculpture is inseparable from the act of drawing. Can you say more about that?

Dreishpoon: Rauschenberg had a great influence on Marisol. When she saw Rauschenberg’s “Combines” she realized that sculpture could be anything and could be completely inclusive of all materials and techniques, even drawing. There’s a lot of drawing on her early sculptures. It was a way for her to animate the sculptures, to give them another kind of life and another kind of skin.

Dreishpoon: It was courageous of her to tackle Native American and other social issues in the 1990s. But while she focused on important subject matter, some of the rigorousness of her process seems to have gotten lost. There’s plenty of pathos. Marisol is someone who understands the human condition. But I don’t find the later works as muscular as her earlier achievements. They are missing the edgy quality that was unique to her.

Ebony: What was her relationship to feminism? It always seemed somehow tentative.

Dreishpoon: Anyone who delves into the 1960s or ’70s has to figure out how to describe feminism of that time. You might consider artists like Krasner, Hartigan, Bourgeois and Frankenthaler as kind of proto-feminists. Marisol probably didn’t consider herself a feminist. She was a woman in a male-dominated art world, but, unlike most female artists, she was able to maneuver through it. It’s a complicated question. Marisol could take it or leave it. I don’t think she was inherently a group-oriented person; she was a bit of a loner.

Ebony: What relevance do you think Marisol’s work has for young artists today?

Dreishpoon: I think it has great relevance for young sculptors, especially those who consider sculpture as an open-ended medium. They would find her work germane and also prescient. The sculpture is daring, and so are her drawings. Drawing is one of the most confessional of mediums. It’s like writing, and it flies in the face of anything monumental or obviously important. Marisol also had an extraordinary ability to weave narrative throughout her work; sometimes it’s autobiographical and sometimes not. Her work is representational, but she always takes it to another level. 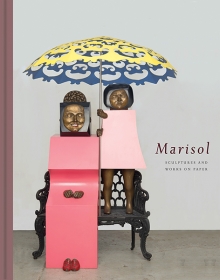