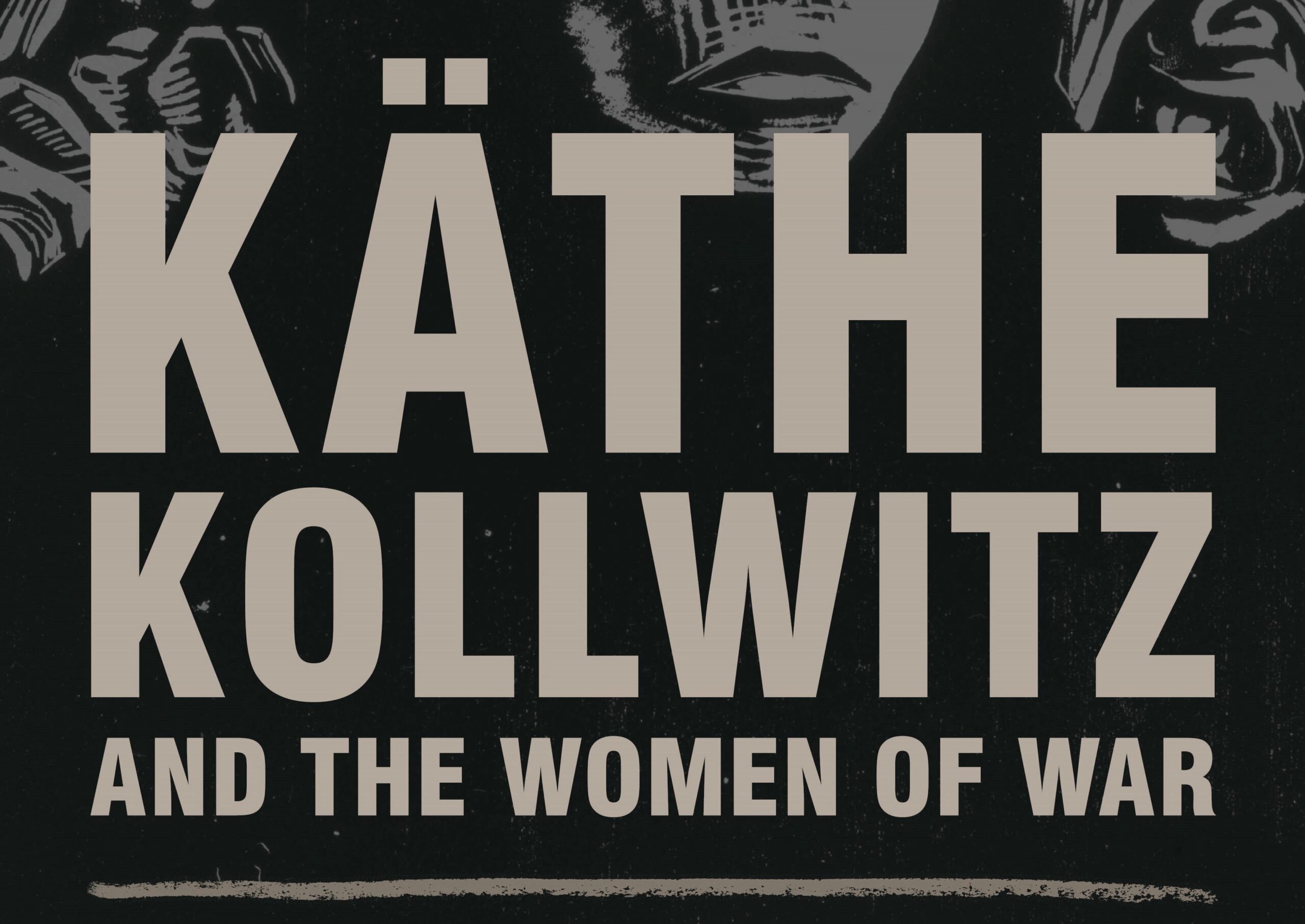 The work of German printmaker and sculptor Käthe Kollwitz (1867–1945) was celebrated through two recent exhibitions: the first was held at the Davis Museum at Wellesley College in Fall 2015 and the second at the Smith College Museum of Art in Spring 2016. The accompanying book titled Käthe Kollwitz and the Women of War: Femininity, Identity, and Art in Germany during World Wars I and II brings together the research and scholarship   generated by these shows.  This insightful catalogue, edited by Claire C. Whitner and including essays by Whitner, Henriëtte Kets de Vries, Darcy C. Buerkle, Anjeana K. Hans, Joseph McVeigh, and Annette Seeler, is the first English-language catalogue on Kollwitz in more than two decades.

Kollwitz dedicated much of her later career to creating images that questioned the efficacy of war, exposed its devastation, and promoted peace.  The essays included in this powerful book discuss the motifs she developed in this pursuit—young widows, grieving parents alongside maternal figures that serve as defenders, guardians, activists, and mourners—within the context of German visual culture from 1914 to 1945.  The following is a guest post by curator and editor Claire Whitner about one of the many memorable images in the exhibition and book.

When The Krieg Cycle: Käthe Kollwitz and World War I was on view at the Davis Museum at Wellesley College, visitors frequently commented that they recognized the motif from Kollwitz’s 1924 poster for the Central German Youth Day with its emphatic message Nie Wieder Krieg (Never Again War).  Most had not been aware that it was by Kollwitz’s hand.  Nevertheless, the freely drawn youth with arm stretched high in the air had a certain familiarity for many.

The figure is striking.  It is imbued with energy.  There is minimal preparatory work related to the poster, which suggests Kollwitz was single-minded in her execution of the motif.  Unlike the woodcuts from her contemporaneous Krieg (War) cycle, which evolved over many years through different media and multiple states, Nie Wieder Krieg has the restless quality of a spontaneous drawing issued forth confidently and resolutely.

For Americans encountering the poster decades after its publication, the ambiguous gender of the figure and enigmatic gesture represent a captivating mystery.  Some scholars describe the exuberant youth as “she,” others use “he” and a few steer clear from gendered pronouns entirely. It has been suggested, though not confirmed, that the figure was inspired by a young member of the Social Democratic Party, Max Westphal.  At a demonstration in Weimar in 1920, Westphal reportedly threw his one remaining arm up in the air—he had lost the other during the war—and shouted the phrase “Nie wieder Krieg!” The drawing bears little resemblance to Westphal’s appearance.  Nevertheless, Kollwitz was known to draw inspiration for her work from the stories of actual people, though rarely adhered to the specific details.

The position of the figure’s right hand—thumb, middle and index fingers pointing upwards with palm facing the viewer—is a gesture that her German audience would have recognized as a “Schwurhand,” a salute used in Central Europe for the swearing of oaths.  Its origins can be traced to the Christian Trinity with the implication that the person taking the oath would abide by his/her word under the authority of God or risk eternal damnation.  In relation to Kollwitz’s poster, the Schwurhand indicates that the youth utters the phrase “Never again war” as a pledge.  It is not a fist shaking to inspire anger towards warmongers amongst the gathered crowds, but rather a sign of deep commitment to the pacifist movement.

In spite of its broad recognition among visitors to the Davis, the Nie Wieder Krieg poster proved more difficult to locate for the exhibition than other lesser-known prints.  This perhaps should have been expected as Kollwitz’s etchings, lithographs, and woodcuts were destined for collectors, be they museums, connoisseurs, or like-minded liberals, who shared her concern for the disadvantaged members of society.  As a poster, this particular example of the artist’s work falls into the murkier category of ephemera and as such, was not necessarily intended to outlast its function as a means of attracting pacifists to a day of anti-war rallies and speeches held in Leipzig on 1 August 1924, the tenth anniversary of the run-up to World War I.   The previous year, Kollwitz had designed a poster promoting peace sponsored by the Amsterdam-based International Trade Union Congress, which was disseminated throughout Europe.  Examples of this poster can be found with the text translated into German, Dutch, Swedish, and Danish.  Her Nie Wieder Krieg poster was not intended to have this reach.

By 1924, Kollwitz was an established and well-respected artist, having received several prestigious awards and commissions as well as membership in the Prussian Academy of Arts. A selection of the posters may have been held in reserve with an eye to preserving a celebrated artist’s work for posterity; others were potentially taken from their display sites by fans of her work.  Those that fall into this second category tend to betray their provenance in their condition; particles from brick and other building materials can often be found in the residue left over from adhesive on the verso. Tears of varying sizes along the edges suggest the aforementioned adhesive had put up some resistance as the poster was liberated from a public wall. Posters from this period were rarely treated like fine prints.  Deep creases indicate they were stored folded up, which is not surprising, as their dimensions would make flat storage quite difficult.  Lastly, posters were not printed on expensive Japan paper, but rather on a much less durable wove paper. According to the 2002 catalogue raisonné of Kollwitz’s prints, only one copy exists in the United States.  It belongs to the National Gallery of Art in Washington, D.C., who generously agreed to lend it to the Davis Museum.  It thus seems clear that Americans familiar with the motif from Nie Wieder Krieg likely saw it as a reproduction.

Visitors to the exhibition, particularly those who were alive during the Vietnam War, probably first saw the motif in works appropriated by other artists.  There is ample anecdotal evidence to suggest that the motif from Nie Wieder Krieg was embraced by the pacifist movement. A poster in the Yanker Collection of political posters, propaganda, and pamphlets at the Library of Congress bolsters these claims.  Its creator likely used a photographic transfer process to lift the figure from a reproduction of the original.  The first catalogue raisonné of Kollwitz’s prints was published in 1955 in New York, so Americans would have had access to images of her work.  It was recontextualized with English text and a bright-pink palette more resonant with the poster aesthetic of the 1960s and 70s.  Kollwitz’s signature transferred with the image, but the strong message likely overshadowed the identity of the original artist. Kollwitz, who held strongly to the belief that her art should be socially conscious, would have found the continued relevancy of her poster many decades later in a different country as evidence of its efficacy.  As Kollwitz explained when she began designing anti-war posters in the 1920s: “Let people say a thousand times that art with a purpose is not pure art.  I, for my part, want to be affective with my art for as long as I am able to work.”

Claire C. Whitner is Assistant Director of Curatorial Affairs/Senior Curator of Collections at the Davis Museum at Wellesley College.