Among people Donald Trump refers to as his “fans,” one of the most commonly expressed attractions to his improbable presidential candidacy is that he “tells it like it is.” Setting aside the not insignificant matter of accuracy (what “it” actually is), the claim speaks to a culture-wide clamoring for authenticity (he “tells it”). With our relentless 24/7 news cycle and constantly chattering and churning social media, careful preparation and subtle commentary have gone the way of the telephone booth. Many of us seem to have lost all patience for—and certainly our admiration of—mindful precision of language in discussing complex matters. Discretion gets blasted as evasion. We crave candor: what is privately felt must be publicly expressed. Mr. Trump certainly delivers. His Twitter feed is a lecture in spontaneous utterances. In his trademark platform he is too natural, apparently, to be constrained by such old-timey notions as grammar.

With Father’s Day having just passed and the Fourth of July looming, it is intriguing and perhaps instructive to consider how far we’ve come—or descended—since the founding of the American Republic. We might begin with the “father of our country.” To a large degree, George Washington’s whole life was an exercise in self-control: he thought constantly and meticulously about how his fellow citizens would interpret his words and his deeds. Washington’s zeal for cultivating a precise image began in his youth. As a boy he copied down over 100 rules for behaving in polite society: how to walk, sit, even laugh. No crossing of legs, blowing on soup, or raising one eyebrow for young George. He famously pursued that dedication to meticulously controlled conduct and language for the rest of his life; Washington fairly radiated an aura of discretion.

An episode from 1787, when Washington was at the height of his fame and his country faced its most critical juncture, affords powerful insight into the man and his age. Washington left Philadelphia in late September 1787 convinced that the summer’s long debates that produced the Constitution had been “little short of a miracle.” The proposed government had been secretly designed. It was fundamentally and to some Americans frighteningly different from the Articles of Confederation and the state constitutions. The standing army, absence of term limits, powers ceded from the states, and tax implications disturbed many citizens. Even members of the convention worried about what might result from so much centralized power. A few balked at signing their names to it. But George Washington was certain that the Constitution could remedy the grievous troubles facing the struggling union of states.

He was reluctant, however, to broadcast those views. One thing that assuaged Americans’ fears about the radical restructuring of the union of states was the widespread speculation that the greatest hero of the revolutionary age would serve as the first chief executive of the federal government. In the eighteenth century no respectable man campaigned for public office; men stood for election, they did not run. Washington knew it would be deeply damaging to his reputation to publicly advocate for a government he might soon head.  So when he got home to Mount Vernon he engaged in a fascinating dance between his public image and his private conduct.

To the general public, Washington maintained a posture of detachment and disinterestedness. Nine states had to ratify the Constitution for it to become law; debates over the controversial plan consumed Americans for the better part of a year. With the Virginia Ratification Convention looming, Washington wrote a former Continental Army soldier that he was “perhaps less qualified to give an opinion upon” the outcome in Virginia “than almost any one, as I very seldom ride off my farms.”

With a cohort of trusted friends and political allies, Washington aggressively promoted ratification. In private letters he made no bones about his zeal for the Constitution and the fatal consequences of failing to ratify. Writing to his friend Charles Carter in December 1787, he proclaimed, “My decided Opinion of the Matter is, that there is no Alternative between the Adoption of it and Anarchy.” Washington flatly rejected skeptics’ criticisms as “addressed more to the Passions than to the Reason.”

Two days after Christmas, Washington was mortified to discover parts of that private letter published in a Virginia newspaper. (Carter shared Washington’s letter with several friends, one of whom was either overeager or indiscreet.) By March, the personal letter appeared in forty-nine papers across the country. Eventually, Washington concluded that the potentially embarrassing leak probably helped his cause: his enthusiasm for the Constitution influenced great numbers of his fellow Americans. And since he was not behind spreading the letter, the news didn’t damage his reputation.

But one thing continued to trouble Washington: “the hasty, and indigested production of a private letter, handed to the public.” It bothered him that the letter lacked what he called “a proper dress”—more polished prose.  He wished, too, that he had included a more thorough and precise defense of the Constitution. If he had known the quickly composed letter would be read by thousands of Americans, he would have, Washington told Carter, “assigned some reasons in support of my opinions, and the charges against others.”

This story of a private letter accidentally being made public reveals many of the core values of George Washington in particular and the founding generation in general. The Revolutionaries cared deeply about words and ideas: they understood the transcendent power of language, to inspire citizens to noble action and, if misused, to provoke and enrage them. The Founders championed restraint and discretion. They practiced the political art of checking fleeting passion against disciplined reason. Self-interestedness and triviality earned their scorn.

I’d like to think that even in our present-day political marketplace of amped-up rhetoric and angry takedowns that George Washington’s conduct in 1787 wouldn’t be derided as crooked phoniness or inauthentic waffling. But I can’t be sure. When you’re obsessed with impulsively telling it like you see it, apparently anything is possible.

Lorri Glover is John Francis Bannon Endowed Chair, Department of History, Saint Louis University. She is author of four previous books on early American history, including The Shipwreck That Saved Jamestown and Founders as Fathers: The Private Lives and Politics of the American Revolutionaries. 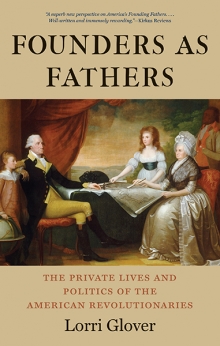