The men who sailed for Spain in the sixteenth century were descended from a long line of veterans who had served in the armies of Leon and Castile during several centuries of warfare against Moorish invaders. Battle-hardened and confident, these men of Spain journeyed westward, looking for the Spice Islands or even Tharsis and Ophir, where Sacred Scripture said that Solomon’s temple builders found gold and jewels.

While they were thus occupied, seaman-soldiers from Portugal managed to find a route around Africa, sailing eastward from there, and bringing back shiploads of silk, gold and spices. Faced with the opportunity to exploit the riches of the non-Christian world, the rulers of Spain and Portugal decided to split the melon. Men from Spain would sail west, while those from Portugal would go east, establishing their own trading centers and returning home with whatever valuable cargoes they could find.

The Portuguese route was long but certain, but along the Spanish route there was a problem: the Pacific Ocean—the Mar del Sur. No one could quite believe the size of this vast expanse of water, nor had anyone charted the winds and currents that might make it possible for Spanish adventurers to sail across the sea and back again. Discovering these trade routes took nearly half a century during which time dozens of ships and hundreds of men were lost. Fewer than a hundred chastened survivors managed to make their way home, and when they did, they came as prisoners, sailing in Portuguese vessels. These stragglers were the first to sail around the world, although they had not intended to do so. They were accidental circumnavigators.

The first was Ferdinand Magellan, who had been to the Spice Islands while sailing for Portugal. A decade later, while sailing for Spain, he ended his circumnavigation at the Philippine island of Mactan. There a native army drove his Spanish landing party back from the beach, and Magellan died face down in the surf, while the water turned red from his countless stab wounds.

The last of the accidental circumnavigators was Gerónimo Pacheco, a native of the island of Mengala off the northern coast of Malaysia. Though he was once a servant whom his Portuguese masters called Jorge, Gerónimo landed in Cebu, where he met the Augustinian friars who had come with Villalobos. They impressed him so much that he became a Christian and was baptized as Gerónimo, the name of the Augustinian superior. When they sailed home, he went along, having become a servant of Pedro Pacheco, one of the survivors of the Villalobos expedition, who gave him a surname. From Spain, Pedro returned to Mexico, and Gerónimo went as well. There he met and married a local girl. In 1564 he enlisted as interpreter in the Legazpi expedition and in 1565 reached Cebu where he had become a Christian. In the process he became one of the few native circumnavigators of this era, only one or two of whom are known by name.

Some of the accidental globe-circlers made their voyages without returning to Spain. Among them were Diego García de Trigueros, one of several Magellan sailors who died off the coast of Africa, after his ship crossed the outward track of the armada. Another was Andrés Blanco, who had joined the fleet on the island of Tenerife and died just before reaching home. Not all of the voyagers were from Spain. Some were foreigners, who had no family name but were identified by their place of origin. Two of them were from Rhodes and were called Rodas. Two others were called Nápoles because they came from Naples. Still another was from Paris, and that became his surname.

A German named Hans Varga made it all the way to Lisbon, where he died in prison. Another man with a similar name, Maestre Anes of Aachen, was a gunner, who circled the globe with the Magellan expedition. He enlisted once again with the Loaisa armada and made it safely back to Spain. Pressing his luck, he enlisted for a third time with the Villalobos expedition. This seems to have been his last trip to sea. He did not reach home, though Martín de Islares did. He had been on the Loaisa expedition and later sailed with Villalobos, but apparently did not make a third attempt.

Other circumnavigators had previous experience exploring the continent with the Coronado expedition.  Among them was Guido de Labezaris, who was contador (accountant) for the Villalobos armada. After returning to Spain and then to Mexico, he went to the Philippines once more and served for a time as interim governor. While some were said to be gentlemen, others definitely were not. Two men from the Magellan expedition, enlisted in the armada of Sebastian Cabot. One of them became chief pilot over Cabot’s strenuous objection. In any case, they argued openly and persistently with the commander and as punishment were marooned on an island off the coast of Brazil where both of them drowned while trying to escape.

If this seems like severe discipline, consider another case. One two-time circumnavigator, a Corsican from the Loaisa and Villalobos armadas, went to the Philippines once more in the armada of Legazpi. Seduced by tales of the riches of Portuguese trade, he plotted with others to seize a ship and use it for pirate raids. The plot came to nothing because one of the conspirators gave things away. However, Corço and two others—all foreigners—were given a fair trial and hanged, just to serve as an example to anyone else who might have similar ideas.

These are a few of the ordinary seamen and officers who first sailed around the world, the accidental circumnavigators. There were at least seventy, perhaps more. All of them were braver than most of us, but most of them were not the sort of people you would invite home for dinner.

Harry Kelsey is a research scholar at the Huntington Library and the author of several acclaimed biographies of sixteenth-century explorers, including Sir Francis Drake: The Queen’s Pirate and The First Circumnavigators: Unsung Heroes of the Age of Discovery. 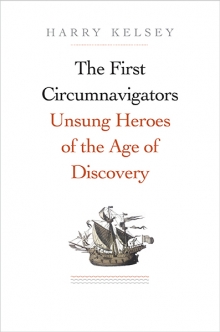