In the United States we do not consider that there is such a thing as a people of Florida or Rhode Island or even of Texas, who have specific and intrinsic rights to their houses and businesses; nor apart from “buy local” campaigns do we care whether a company is headquartered within or outside the state. We consider that you have a right, neither more nor less, to what you can afford. And yet in the US there are compensating buffers—Social Security, Medicare, Medicaid, food stamps, unemployment, disability and deposit insurance—all of which provide a baseline below which, in principle, one cannot fall.

Europe, however, struck a different bargain, basing social welfare policy at the national level while preserving distinct national identities within the European Union. And so the question: does national identity convey economic rights of any type? In a contest with creditors and contracts, do sovereignty and democracy have a role? In joining the European Union—a confederation of states and not a federation—most European peoples believed so. But the lesson of the Greek case, so far, is that from the perspective of Germany, the European commission, and the European Central Bank, the answer is that no national economic rights whatever remain.

Nobody contested these points. Nobody argued that cutting pensions, for instance, would restore economic growth. But neither were any of these points conceded. Instead Greece was told to conform to instructions, not because it was good for Greece, but because change for Greece would entail concessions to other countries that the creditors did not choose to make. So the Greek welfare state, which was never strong to begin with, had to be destroyed.

And, when under imminent threat of collapsing the bank system in July 2015, Greek resistance finally broke, her creditors reimposed all of their conditions and more. They even set up a privatization commission which they and not the Greek state directly control. A colonial administration is in place, and a policy of liquidation and foreclosure is today in full force, dispossessing the entire Greek people, by and large, from their homeland.

The political intent was, in part, to quell resistance elsewhere and to foist similar “reforms” on, especially, Italy and France.  Yet Portugal has since moved Left. Spain has since moved Left. Italy in a quiet way has taken her distance. In France and Belgium workers have risen in open revolt.  Hungary and Poland are in the hands of a nationalistic far right. And even in Finland options are being explored. Meanwhile, if the European Union escapes a British exit on June 23rd it will be by a narrow margin.

All of this—and more to come—is, in part, the price of the Carthaginian policy in Greece, which exposed the dynamics of European economic power, all too clearly. As Cato the Elder frequently stated to the Roman Senate, ‘Carthago Delenda Est‘—Carthage Must be Destroyed. Now, it seems, Greece’s creditors have made the same decision.

James K. Galbraith holds the Lloyd M. Bentsen, Jr., Chair in Government/Business Relations at the LBJ School of Public Affairs, University of Texas at Austin. He is the author of eight books and hundreds of articles for both scholarly and general-interest journals. 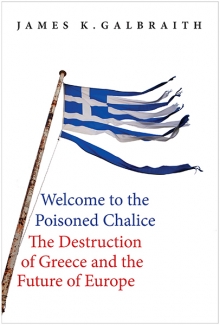