Although the New Testament uses the terms “priest” and “bishop” interchangeably, the early church quickly distinguished between the two. Priests acted as advisers and teachers. Bishops led Christian communities and “celebrated” (administered) the Eucharist—“Communion” or “the last supper”—that is, the ceremony that Jesus instructed his disciples to observe. By the 300s, however, it was common for both priests and bishops to celebrate the Eucharist and baptize their parishioners.

Numerous writers in the first few centuries expounded on the significance, responsibilities, and powers of priests, while outlining the ideal qualities to be sought in candidates. The following document comes to us from John Chrysostom—literally “John the Goldenmouth,” a moniker bestowed in recognition of his eloquent preaching—who served as the bishop of Constantinople from 398 to 404.

The Christian priest’s power, then, derives from his administration of sacramental rites that bestow grace on and bring salvation to those who receive them. Christian priests possess, in Chrysostom’s words, the “authority to remit sins,” making them “responsible for our birth from God.” In fact Chrysostom argued in other texts that a priest exercises more power over Christians than does a king over his subjects or a father over his children.

Many priests and bishops at the time fully endorsed such language about their “authority” and power; others emphasized instead their role as a vehicle through which God bestowed the grace that only God can bestow. Debates about how, exactly, priests serve as conduits for God’s grace—or, to be more precise, debates about the ways God employs priests to dispense grace—would rage for centuries. But the salient point—the point on which all those eventually deemed “orthodox” could agree—was this: priests administer the church and they administer the sacraments through which God extends grace. A church without priests is no church at all; only a heretic could propose administering sacraments without a priest.

The work of the priesthood is done on earth, but it is ranked among heavenly ordinances. And this is only right, for no man, no angel, no archangel, no other created power, but the Paraclete himself ordained this succession, and persuaded men, while still remaining in the flesh to represent the ministry of angels. The priest, therefore, must be as pure as if he were standing in Heaven itself, in the midst of those powers.

The symbols that existed before the ministry of grace were fearful and awe-inspiring: for example, the bells, the pomegranates, the stones on the breastplate, the stones on the ephod, the miter, the diadem, the long robe, the golden crown, the holy of holies, the deep silence within. But if you consider the ministry of grace you will find that those fearful and awe-inspiring symbols are only trivial. The statement about the law is true here also: “The splendor that once was is now no splendor at all; it is outshone by a splendor greater still.” When you see the Lord sacrificed and lying before you and the high priest standing over the sacrifice and praying and all who partake being tinctured with that precious blood, can you think that you are still among men and still standing on earth? Are you not at once transported to Heaven, and, having driven out of your soul every carnal thought, do you not with soul naked and mind pure look round upon heavenly things? O, the wonder of it! O, the loving-kindness of God to men! He who sits above with the Father is at that moment held in our hands, and gives himself to those who wish to clasp and embrace him—which they do, all of them, with their eyes. Do you think this could be despised? Or that it is the kind of thing anyone can be superior about?

From Eastern Orthodox Christianity: The Essential Texts by Bryn Geffert and Theofanis G. Stavrou, published by Yale University Press in 2016. Reproduced by permission.

Bryn Geffert is librarian of the college and lecturer in the department of history at Amherst College and formerly associate professor of Russian area studies at St. Olaf College. Theofanis Stavrou is professor of history and director of Modern Greek Studies at the University of Minnesota. 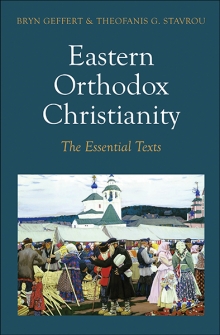