The animal on everybody’s mind in June 1973 was Secretariat, the first Triple Crown–winning horse in a quarter century. For much of the rest of the world, it was a summer of tumult. Watergate was exploding in President Nixon’s face, and the environment was often at the top of the news. That spring, three years after the first Earth Day, the Supreme Court upheld by four-to-four with one abstention a lower court ruling that barred the Environmental Protection Agency from approving any state air pollution that lowered standards in the development-crazy and mining-dependent Southwest and West. A Boston Globe editorial praised the ruling: “So far, neither the regulations nor the deadlines have sufficiently served to protect the atmosphere around us.”

Secretariat and even the scrapping over clean air were the farthest thing from my mind. There were still many details to sort out regarding translocating puffins. Four summers after conceiving of the idea of reestablishing a puffin colony, I was on the verge of launching the project and preparing for my first visit to Great Island in Witless Bay, Newfoundland, with Kathy Blanchard as my first research assistant. She hailed from middle-class Farmington, Connecticut, but her lineage went back to a great-grandfather who was a fisherman, seal hunter, and captain of a schooner that transported people, goods, and coal for the lighthouses between Cape Breton, Nova Scotia, and southwest Newfoundland. He sailed his ship into his seventies and died seven days short of one hundred. Kathy’s father and grandfather were also from Newfoundland, with her grandfather serving as the manager of the first fish hatchery in Connecticut. Kathy’s family hungered for nature and frequently took her on hikes and adventures in the woods.

This led to a critical moment where her high school guidance counselor told her that there were not many job options for a girl who loved the environment. She was told she could be a forest ranger but that she would be sitting alone in a tower. Her grades were good enough to get into the University of Pennsylvania, where she was far from happy the first year. She tried to apply for summer environmental jobs but got nowhere until a cousin told her about Audubon’s summer camps. Kathy applied, writing, “I want this more than anything in my life.”

Her desire to join me for the adventure to Newfoundland did not surprise her hiking parents, but they were worried about this business of reaching into burrows along high cliffs, and who was this Steve Kress? They were so worried that Peggy Morton had to reassure them in an exchange of letters that all would be okay. The parents would approve only if a friend of Kathy’s—Susan Kains (a fellow intern at the Aullwood Audubon Center)—could accompany her. Ira Gavrin, a former Audubon Camper with a rugged jeep, provided transportation for the expedition.

Nettleship had agreed for us to make two trips to Newfoundland in 1973. Our first trip was a mid-June scouting trip to see the puffin habitat and to collect temperature measurements within puffin burrows to help us replicate similar burrow climates in Maine. After arriving in East Bauline, we soon found John Reddick, David Nettleship’s primary transport to Great Island. There were fewer than twenty small houses and just one dock, so everyone knew John. He and his family had fished for cod and salmon in Witless Bay for decades. He was a large man with a grand smile, and he gave us a warm welcome.

We camped near the town landing for the night, then met John and his brother Bernie at dawn the next morning for the trip to Great Island. We started encountering puffins nearly as soon as we left the dock, and the numbers increased as we approached the island. Some birds were so heavy with meals of capelin that they could not become airborne even though they tried running on the water. Soon, Great Island loomed ahead surrounded by a few Greenland-born icebergs. From a distance, it appeared to be covered in snow and ice, but as we approached, we could see that the cliffs were caked in guano.

The slopes were largely covered with dark green grass and the interior with stunted spruce. John pulled his dory into a grotto where he secured a rope across two steep cliffs that Bernie deftly snagged and held with his boat hook. The dory rose and fell six to eight feet with the sea surges. In between waves, John shouted for us to jump, and one by one we hopped out onto the slimy rock, trading the thumping sound of his antique one-lung motor for the tumult of trumpeting murres and chanting kittiwakes.

Puffin burrows were everywhere: on the grassy slopes, among the tangled roots of the spruce forest, and in steep cliff habitats. In flat regions the grass was lush and green, benefitting from the guano of puffins and more than a million pairs of Leach’s storm-petrels that honeycombed the soil. In some places, the tunneling and excrement from puffins had killed the vegetation, exposing the soil to erosion. Nearly everywhere, puffins stood at burrow entrances or flew in huge ellipses out to sea and back to the island.

From Project Puffin: The Improbable Quest to Bring a Beloved Seabird Back to Egg Rock by Stephen W. Kress and Derrick Z. Jackson, published by Yale University Press in 2016. Reproduced by permission.

Stephen W. Kress is the National Audubon Society’s Vice President for Bird Conservation and director of the Audubon Seabird Restoration Program and Hog Island Audubon Camp. Derrick Z. Jackson, a Pulitzer Prize finalist for commentary and an accomplished photographer, is a contributing columnist at the Boston Globe. He lives in Cambridge, MA. 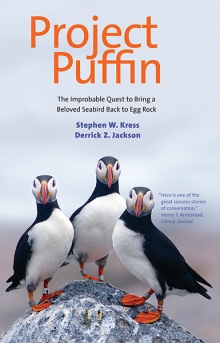