…The logic of the text is causation: If you do x, then y will happen. This is, of course, karma. Every event comes about because of previous events. Moreover, every event sets up chains of causation that produce innumerable further effects. The Buddha’s teachings on karma take this insight to a personal level: Everything I do will have effects. In time, I will experience the effects of my own actions – whether in my environment, the people I find around me, or in the gradual changes to my own personality.

Thus the logic of the ten virtues appeals to our interest in our own well being. Don’t steal, the text says; not because it’s bad in itself, but because bad things will happen to you if you do steal. The way these consequences are described is almost paradoxical. If you steal, you will end up poor. Other, more detailed texts on the ten virtues lay out the thinking behind this. If you steal repeatedly, you are likely to end up in the company of thieves, which makes it more likely that you will be robbed. The same is true of other kinds of behaviour and mental attitude.

In the broader scheme of things, the text also tells us what will happen in lives to come. In saṃsāra, life is an endless cycle of birth and death. To be born human is considered a great privilege, as it is only in human life that it is possible to practise the Buddha’s teachings. Birth as a human being is attributed to previous virtuous behaviour. Consistently bad behaviour in human life is likely to lead to rebirth in less favourable states of being, the ‘three lower realms’ the text describes: birth as a denizen of the hells, as a hungry ghost, or as an animal. It is said that these three kinds of rebirth are the result of a preponderance of anger, greed, or stupidity in this human life.

Towards the end of the text, we also hear about rebirth into the higher realms of being. Living a virtuous life is said to lead to a rebirth in a human life, in a position of privilege or wealth. Upholding the ten virtues can even lead to rebirth as the lowest form of god: an attendant in the realms of desire. While the Buddha denied the idea of a permanent, autonomous god, just as he denied that anything could be permanent or autonomous, he did not deny the existence of gods per se. The Indian mythology that Buddhism inherited is full of gods; these gods are just another kind of sentient being, living lives that are long and pleasurable, but must still eventually come to an end.

Thus the practice of virtue can lead to the lowest level of divine rebirth, in the realm of desire. The higher divine realms, those of form and formlessness, are reached through certain kinds of non-Buddhist meditation practice. These are practices of absorption and the shutting-off of sensory perception, and do not lead to enlightenment. Instead, due to the meditator’s attachment to the absence of distraction, they lead to the refined mental states of these god realms.

A Teaching on the Ten Virtues ends with a short discussion of meditation in Buddhism according to the approaches of the hearer (śrāvaka), the solitary buddha (pratyekabuddha), and the bodhisattva. The hearers are those who follow the teachings that the Buddha gave to his first disciples on the noble eightfold path. The solitary buddhas are those who realize for themselves the truth that the Buddha understood when he sat under the bodhi tree: the twelve links of dependent origination. Together, they are considered to belong to the vehicle of the hearers, another name for the hīnayāna.

The bodhisattvas, on the other hand, belong to the mahāyāna or ‘greater vehicle’, and their greatness is in their compassion and wisdom. This wisdom is brought about through a meditation that embraces emptiness, which our text calls ‘non-abiding’. What this means is that the meditation of the bodhisattva contains no point of reference. It is a process without a fixed end-point, and therefore it does not reach a conclusion; it is ‘non-abiding’. Likewise, the wisdom that results from this meditation is non-abiding.

The reason for having this discussion at the end of a teaching on ethical behaviour is that in Buddhism ethical behaviour alone can only take you so far. Practising the ten virtues can lead to happiness, in this life and the next, but it is not sufficient to take you out of the cycle of birth and death. And because nothing is permanent, this happiness will not last. Only through wisdom can we transcend the cyclical alternation of happiness and suffering. When I do a virtuous deed, the wisdom of emptiness sees that neither I, nor the person who is the recipient of the deed, nor the deed itself, have any independent reality. They only exist at this moment in relation to each other – this is what is meant by ‘emptiness’.

From The Spirit of Tibetan Buddhism by Sam van Schaik, published by Yale University Press in 2016. Reproduced by permission.

Sam van Schaik is senior researcher in the International Dunhuang Project at the British Library, and a principal investigator in the research project “Beyond Boundaries: Religion, Region, Language and the State.” He is the founder and editor of www.earlytibet.com, and his previous books include Tibetan Zen. 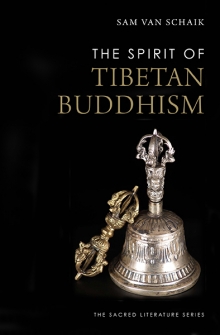