John Atsongo in the Kakamega Forest at Sunrise.

June 2016 brought me to Kenya, where birders of all feathers are flourishing.

As the easternmost remnant of Guineo-Congolian rain forest, the Kakamega Forest is an attractive destination for avi-tourists, who are inspired by its list of 358 species, including some not otherwise found outside the forests of Central and West Africa. I went birding with John Atsango, who works as a guide to visitors at the Rondo Retreat. John exemplifies the convergence of vernacular, scientific, and recreational birding. As a boy growing up in the forest, he came to know birds according to local folk categories. Later, while working as a high school teacher, he learned the ornithological species by their English names and binomials. Now, in his mid-fifties, he makes a living by guiding recreational birders from around the world. My best birding moment was hearing John lure a White-Spotted Flufftail (Sarothrura pulchra), a shy bush dweller, toward us by imitating its call. Curious to find a friend, the bird approached, over long minutes of John’s repeated monotone whistling. It came near, but when it saw we were humans, it fled. Down on my hands and knees in the undergrowth, I caught only a retreating flash of red and black.

I was interested to watch John whistling a Flufftail out of hiding because the phenomenal birder Jali Makawa did exactly that on a 1961 trip with Mel Traylor of the Field Museum in Chicago. They were in Zambia and the bird Jali called was Buff-Spotted Flufftail (Sarothrura pulchra), a cousin species to the one I saw in Kenya. In contrast to the demure hooting of the bird in the Kakamega Forest, this Flufftail’s calls swell from central African undergrowth like a fog-horn. That sound is so eerie and the bird so elusive that people from Cameroon to Malawi attribute the noise to a mythical reptile, either a chameleon or a cobra who sports a crest like a rooster’s. Makawa’s bird expertise had roots in those folk traditions, but as an assistant to ornithologists, he knew that the foghorn call came from a skulking bird. So he raced after it, into the undergrowth with his shotgun. He bagged several specimens of the Buff-Spotted Flufftail that are now preserved in the collections of the Field Museum.

John and I were watchers, not collectors. His calling skills were excellent, but I was limited by my own visual acuity and had to absorb the encounter during a single instant of revelation; unfortunately, the glimpse was not enough to justify adding the White-Spotted Flufftail to my own list of visual identifications. Although I failed to imprint the bird on my memory, the moment was memorable for John’s reenactment of historic African expertise.

In Kakamega we also sought out vernacular knowledge about birds. John organized interviews in Kakamega villages about the African Grey Parrot (Psitticus erithacus), a species whose populations are now in decline around Africa because of illicit trade. They are in demand as a cage birds worldwide because of their exceptional vocal learning abilities. Men living in the forest explained that the vocal talents of their parrot neighbors aided poultry keeping: African Greys called out alarms when eagles came near, warning the chickens in the homestead to take cover. Historically, Kenyans did not keep talking birds in cages, but relied on them as sentries to protect their domesticated fowl from raptors. The Luhya people of the Kakamega Forest respect this talent: they don’t eat birds with the ability to mimic. Parrot poaching does not seem to occur in Kakamega, but people in other African forests appreciate that catching and selling a mimicking bird will bring in needed cash. Kakamega Forest is listed as an Important Bird Area and has protected status, but the monetary value of lumber and the appeal of its arable land put pressure on the forest. Eco-tourism, especially among birdwatchers, is the best hope for making conservation economically attractive to the people of Kakamega.

Also in June of 2016, I participated in another institution of African birding, Nature Kenya’s Wednesday Morning Bird Walk. Founded by Fleur Ng’weno in 1971, the Bird Walk has brought together generations of birders from around the world. It gives experienced birders the chance to see a range of species without leaving the city and young people use it to learn the practice from a generous and inspirational teacher. Fleur’s exceptional charisma has inspired romantic fiction and a social media hashtag #birdingwithfleur. A recent television show about the Bird Walk (now posted on YouTube) featured this next generation of Nairobi birders describing what motivated them to get up early on Wednesdays to look for birds. Their explanations ranged from the restorative effects of spending time in nature, professional aspirations to work as guides, and Fleur’s inspiration. On that morning in June, we went to Paradise Lost, a local resort and picnic area. Between the efforts of Fleur, a few other experts in the group, and many young learners, our day’s tally numbered an impressive 74 species.

Birding is about society as much as birds. In it, we see the politics of cultural and economic difference. Birding varies over time and place. It is by definition local, a search for the birds of a specific place, but it not locally bound. In Kenya this June, I witnessed cosmopolitan interactions among practitioners from a range of knowledge traditions. Scientific ornithology originating in Europe had determined what qualified as a species. These exotic binomials have naturalized themselves in Kenya and now provide points of contact between African vernacular experts and eco-tourists from other continents, birders who have no other connection to science. Even while ornithology structures birding conversations, folk knowledge remains robust and the market for bird guides and parrots has given it monetary value. In Nairobi young people with urban upbringings who lacked connection to historic African knowledge, were finding another avenue into knowing birds.

But in Kenya as much as anywhere else, the politics of birding are also personal. Knowing birds aids the cultivation of self. As birders, Kenyans create themselves as individuals, connect with fellow humans, and provide for their families. The rewards of birding are sufficient to warrant the continuation of historical practices and may inspire innovations that are necessary to a vital future.

Nancy J. Jacobs is Professor in the Department of History at Brown University. She is the author of Environment, Power, and Injustice: A South African History and Birders of Africa: History of a Network. 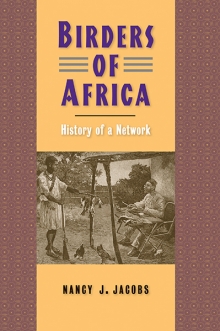